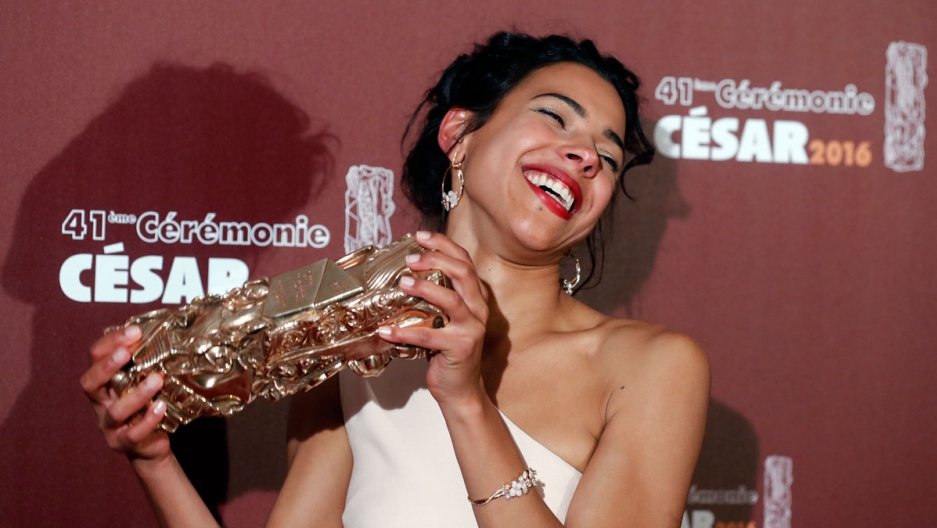 Actress Zita Hanrot holds her trophy after receiving the Best Female Newcomer Award for her role in the film "Fatima" at the 41st Cesar Awards ceremony in Paris, France.

The Academy of Motion Picture Arts and Sciences — the organization behind the Oscars — has announced plans to increase its diversity after public outcry over this year's all-white nominees for the top acting prizes.

The French equivalent to the Oscars — the César awards — were given out on Friday. Actress Zita Hanrot tearfully accepted the award for Best Female Newcomer Award for her performance in the film "Fatima."

"I can't really believe I'm here," she told the audience. But her win signified something else. Hanrot became the first black woman to win an acting honor in the history of the César awards, according to the Conseil Représentatif des Associations Noires de France (Representative Council of France's Black Associations) or CRAN.

The group recently published racial and ethnic statistics going back to the Césars' creation in 1975. CRAN says through the year 2000, 0 percent of nominees were actors of color. From 2000 until last year, minority actors made up 7.5 percent of honorees.

Compiling racial statistics like this is no big deal in the US, but it's controversial in France, says CRAN president Louis-Georges Tin.

"If we want to count," he says, "we need to start counting ourselves."

I met with Tin the night before the César awards above a Paris café. He was born on the French island of Martinique.

His organization is already a little unusual in France — one organized by a single ethnic group. And CRAN's work over the past decade — generating statistics about race in French public life — makes them even more of an outlier.

"People think it's either a way of thinking that's practically Nazi, or worse … American," he joked.

Many French people associate collecting ethnic statistics with World War II and the collaborationist Vichy government of occupied France, according to Erik Bleich, a political scientist at Middlebury College.

"People tagged Jews in order to deport them to Nazi concentration camps," Bleich says. "That's the memory that motivates them and that's the fear that motivates them that once you start collecting these statistics you don't know how they're going to be used and they could be used for really evil purposes."

It's been illegal to ask people's race on surveys in France since 1978 — that includes the national census. Researchers must appear before a government committee to ask for exceptions.

But beyond the historical fear of misuse, France also considers racial categorization at odds with its principles of egalité — equality.

"A lot of people have an allergy to the notion of communities," Bleich says. "So once you start identifying people by race you start making them a representative of their community instead of French.

And France sees itself as universalist, explains Dominique Sopo, the head of another French advocacy group, SOS Racisme.

Sopo says statistics have been important to proving the existence of discrimination in areas like employment and policing. But he thinks there's a risk in making them too central.

"My father is from Togo," he says. "My mother is a white Frenchwoman. I could very well in my life define myself as Black, but at another moment as mixed, at another as White. We need to allow people to be free to define themselves and not squeeze them into preconceived categories."

He does agree with Tin though, that the next conversation for French cinema and television should be about the roles open to minority actors. And Tin says it's time for France to start talking about how ethnic minorities are represented onscreen.

"Not just that they're present, but that they appear as more than just black characters to laugh at and North Africans to fear," Tin says.