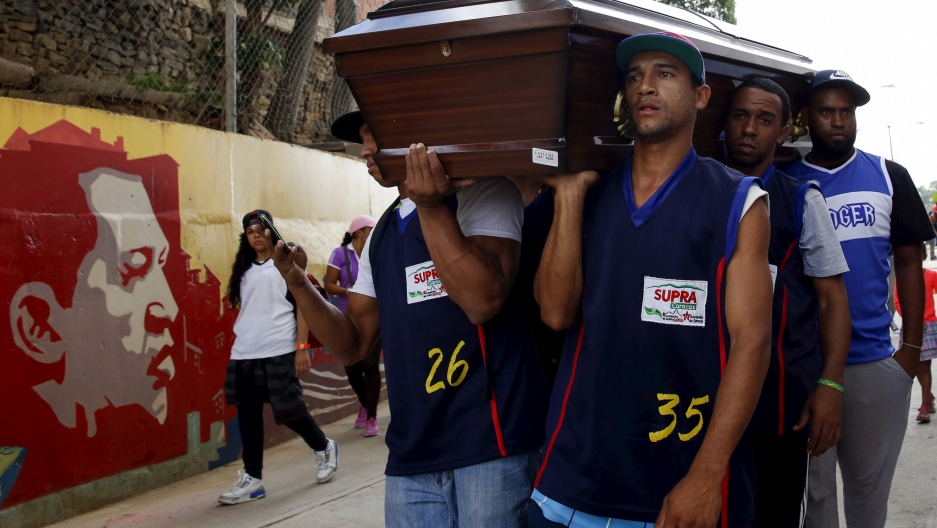 Relatives and basketball teammates of a crime victim carry his coffin prior to his burial in Caracas, Nov. 25, 2015.
Credit: Carlos Garcia Rawlins
Share

The news trickling out of Caracas just keeps getting worse. A recently published ranking of the world's most dangerous cities listed the Venezuelan capital at the top of the charts. The city's murder rate supposedly reached an eye-watering 120 per 100,000 inhabitants in 2015, almost 20 times the global average. City officials were quick to dismiss the list as fatally flawed.

The annual ranking of the world's most violent cities is produced by a Mexican research group called Security, Justice and Peace, or SJP. For the past few years SJP has generated big headlines for its review of the 50 most murderous cities. While attracting media attention, the organization's methods are coming under increasing scrutiny.

Predictably, Venezuelan authorities argue against the findings, specifically the one that Caracas is the world's most violent city. It’s hard to know for sure since they seldom make disaggregated crime data available. For example, local officials recently announced that 17,778 Venezuelans were murdered in 2015. This compares to 27,875 homicides reported by the Venezuelan Observatory of Violence (OVV) for the same year. That's a big difference.

Meanwhile, some specialists are convinced that it is not Caracas but San Salvador that holds the record for the most murderous city. They are probably right. San Salvador witnessed a 53 percent increase in homicidal violence between 2014 and 2015. The Salvadoran capital's tally is based on forensic data from the judicial system, while Caracas's estimated rate is based on a non-representative sample of cadavers from the city's crowded morgue.

More from GlobalPost: Venezuela’s capital ranks as the world’s most murderous city

Notwithstanding recent criticism, the SJP list of dangerous cities is provoking a much-needed debate about the problem of homicidal violence in Latin America and the Caribbean, including in Venezuela. If the discussion is going to drive positive violence reduction efforts, however, it must be informed by reliable data. Once statistics are shown to be untrustworthy, the case for action is undermined.

So what's really going on when it comes to murder in Venezuela?

Generating an overall estimate is tricky since different sources supply contradictory definitions and varying time-series. In 2012, for example, the country's Ministry of Health provided a low estimate of homicide, including some 9,942 victims. Meanwhile, Provea, a local nongovernmental organization, estimated that there were 16,072 homicides the same year. For its part, the OVV generated an even higher estimate, including 21,728 murders in 2012.

The truth is that it is hard to generate valid murder data in Venezuela, much less Caracas. The Ministry of Health relies on a single figure — reported homicides on the basis of vital statistics data which track mortality information. Provea also tabulates reported murders, investigated deaths, and state-killings compiled by the country's Cuerpo de Investigaciones Científicas, Penales y Criminalísticas (CICPC). OVV applies an econometric model based on the same three types of data: reported homicides, state-killings and investigated deaths provided by CICPC.

Complicating matters, the Venezuelan government has declined to issue authoritative homicide statistics in Caracas over the past decade. The official website of the Venezuelan Security Observatory at the Ministry of the Interior is still "under construction." Remarkably, despite all independent evidence to the contrary, the authorities are claiming that murder rates are declining in the country, including by as much as 17 percent in 2013. State officials regularly accuse the opposition and the media of inflating figures without providing any of their own.

The silver lining is that the ongoing furor over homicidal violence in Caracas is forcing the government to be more transparent in how it generates its numbers. Public debate is also shining a light on the catastrophic violence affecting other major Venezuelan cities, such as Barquisimeto, Maracaibo and Maracay, all of which very likely have murder rates above 100 per 100,000. Official data aren't currently available, however.

The questions over Caracas's homicide rate are also underlining the complicity of state security forces in committing and failing to investigate lethal violence. Specifically, the difference between the official homicide rate (58 murders per 100,000 in 2012) and those of others such as the OVV (90 murders per 100,000) is probably due to the former's exclusion of extrajudicial killings by state security forces.

This also highlights the issue of impunity: An estimated 16.7 percent of all homicides occur in the capital, but only 6 percent of homicides in Venezuela ever result in a conviction and a prison sentence. That means that over 94 percent of all homicides go unpunished, an incentive for lethal violence if ever there was one. It is little surprise that there is a high level of criminal activity by armed gangs and overzealous public security officers.

Although the security situation in Caracas is dire, it is possible for the city to turn things around. Other metropolises once lost to crime — Ciudad Juarez in Mexico, Medellin in Colombia or Sao Paulo in Brazil — have registered drastic reductions in homicide over the past decade. A combination of strategies, including hot-spot policing, more inclusive public spaces, preventive measures focusing on broken families, and efforts to reduce corruption and impunity all have demonstrated effectiveness.

A good way to start is by ensuring transparency about the scale of the violence problem, including in relation to homicide figures. High quality and reliable data are the cornerstone of effective policy. The Homicide Monitor data visualization, for example, is one of many examples of how to disseminate such information to those who need it most. These kinds of platforms, when combined with enlightened leadership, can literally make the difference between life and death.