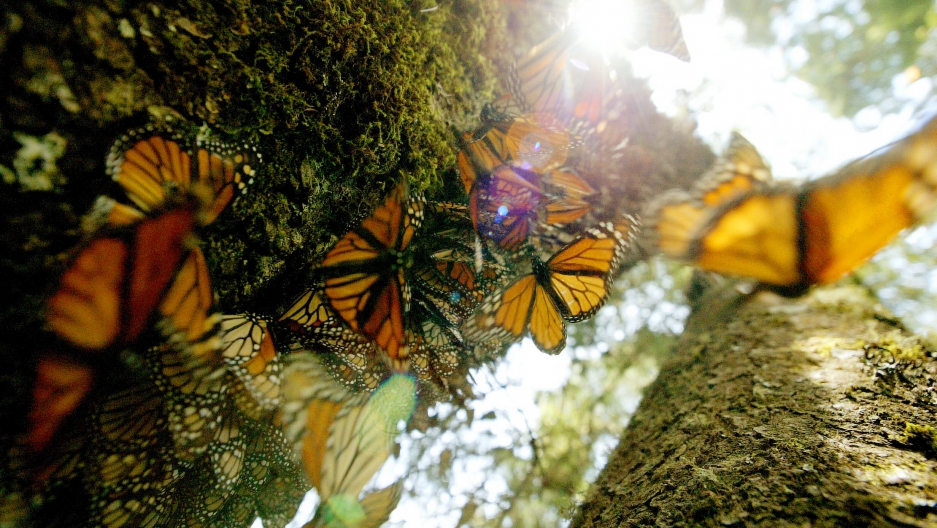 Hundreds of Monarch butterflies line a tree trunk in the El Rosario butterfly sanctuary in the Mexican state of Michoacan.
Share

The monarch butterfly population has soared in its Mexican winter sanctuary this season, marking a recovery for the threatened species that migrates across North America, officials said Friday.

The orange and black butterfly covered 4.01 hectares (9.9 acres) of pine and fir forest in the 2015-2016 season, more than tripling last year's figure of 1.13 hectares, Mexican, US and Canadian officials said.

While researchers measure the population by the area it covers, it estimates that there were 140 million butterflies this year in the mountains of central Mexico.

But officials and conservationists warned that they must sustain their efforts or risk reversing this progress.

"The area occupied by the monarchs in the Mexican sanctuaries has increased in the last two seasons, which suggests the start of a recovery of this butterfly," said Omar Vidal, Mexico office director for the World Wide Fund for Nature.

"It's very good news. At the same time, we can't lower our guard in any of the three countries and we must redouble our efforts to ensure this migratory phenomenon transcends this and the next generation."

The decline has been blamed on illegal logging in their Mexican wintering grounds and the drop in milkweed on which they feed due to the use of pesticides in the United States and Canada.

The butterflies travel more than 4,000 kilometers (2,500 miles) from Canada to spend the winter in a mountain reserve straddling the states of Mexico and Michoacan.

They usually arrive at their nesting ground between late October and early November and head back north in March.

Alejandro del Mazo, the head of Mexico's office for protected areas, credited the recovery to the "great results" of the joint actions taken by the Mexican, US and Canadian governments to reverse the decline.

Dan Ashe, director of the US Fish and Wildlife Service, said his country has restored more than 100,000 hectares of fields without pesticides in the past year, with an investment of $20 million.

"I am encouraged by the good news coming out of Mexico, an indication that we have the ability to save the North American monarch butterfly and with it one of the most remarkable wildlife migrations on the planet," Ashe said.

"But there is much more we need to do and it will take a coordinated citizen effort on a scale never before seen."

Ashe urged people across the region to help the butterfly thrive by planting milkweed, and reach the goal of having 250 million monarchs by 2020.

"A simple stand of native milkweed can make every backyard, school, community center, city park and place of worship a haven for breeding or migrating monarchs, and together we can bring about the greatest citizen conservation victory of our generation," he said.

But Vidal of WWF warned that herbicides are still a major problem in the United States, along with illegal logging in Mexican sanctuaries.

"The threats to the monarch remain and if they are not dealt with, if actions are not followed through, the migratory phenomenon won't recover," he said.