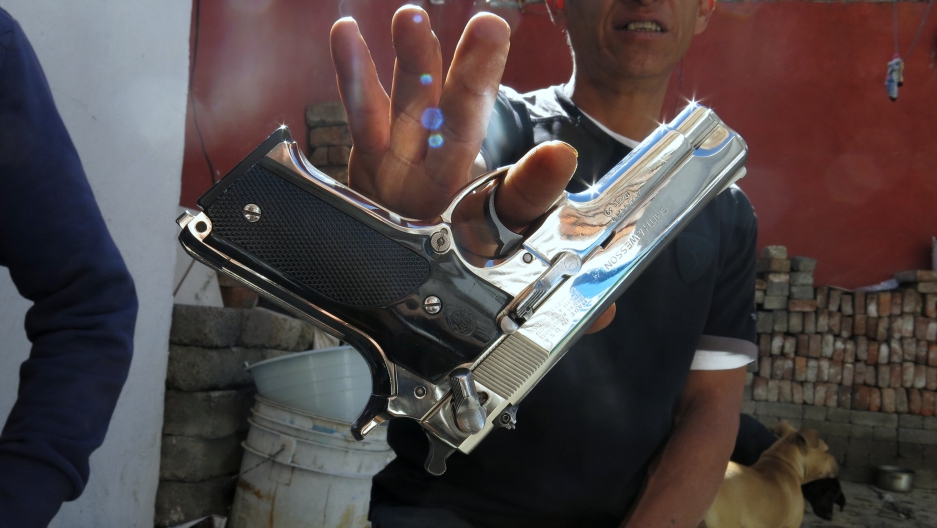 MEXICO CITY — Javier scoots onto a plastic stool in a courtyard. He reaches beneath his shirt and pulls out a shiny Smith & Wesson semi-automatic pistol. He deftly spins it through his hands, ejects the magazine, and holds it out for inspection.

“This one’s new, straight from its packaging,” he says.

Javier, who only gave his first name, operates this illicit little gun mart in Tepito market, a famed contraband hub in Mexico City. Pirated DVDs, drugs, a hit man ... just about anything can be bought with a tall enough stack of pesos. If you’re looking for a gun, don’t call it by the common Spanish name “arma” — here it’s a “cohete,” meaning “firecracker.”

This market is one of the cogs in the well-oiled machine of Mexican arms trafficking. Whether it’s an AR-15 rifle, a shotgun, or this Smith & Wesson pistol, chances are good it came from the United States. The few studies out there suggest 70 percent of firearms seized by the authorities in Mexico come from the US, usually purchased legally in the Southwest. Those guns become illegal when they cross the border secretly to Mexico, where the law says all firearms must be registered with the army, including sales, transfers, or imports.

How many thousands of guns come across the border is a mystery, but a study commissioned by Mexico’s congress suggests there are more than 15 million firearms in the country — about one for every eight Mexicans — and 85 percent of the guns are illegal.

More from GlobalPost: US arms, exported legally, are behind many violent crimes in Mexico (CHARTS)

And the consequences have been severe. Since 2006 — the year Mexico launched its war on drug cartels — guns have become the top murder weapon, according to the federal government. In 2001, 25 percent of murders were committed with a gun. Today, it’s 56 percent.

Since President Enrique Peña Nieto took over in 2013, more than 28,000 Mexicans have been killed with a firearm, on pace to surpass the brutal legacy of the previous administration. US and Mexican authorities jointly pour billions of dollars into stemming the flow of drugs north, but since Peña Nieto came to power, stopping guns headed south has stagnated.

Despite President Barack Obama’s fervor against gun violence in America, experts say that trafficking to Mexico is barely on the radar.

“I don’t get any sense of ‘the fierce urgency of now’ from any of the parties on the Mexican or US side when it comes to dealing with the issue,” says Joy Olsen, executive director of the Washington Office on Latin America (WOLA), a research and advocacy organization.

A report in January by the Government Accountability Office (GAO), a US federal watchdog group, said little progress has been made in fighting gun trafficking from the US to Mexico. Interagency squabbles and distrust between the two countries continue to hinder efforts to stop smugglers at the border. The report says cross-border collaboration is just starting to recover since falling off in 2012.

Mexican authorities submit confiscated weapons to the US for tracking, but the figure has dropped in recent years despite rising gun crime. In 2011, US officials evaluated 22,097 guns seized in Mexico, compared to just 15,142 in 2014.

In Mexico, “stopping [gun] trafficking just isn’t on the agenda,” says Paulina Arriaga, the director of gun control advocacy group Desarma Mexico. After commissioning the report revealing 15 million illegal guns in the country, the congress hasn’t tightened regulations at all.

Meanwhile, traffickers are getting smarter. The GAO report details how gunrunners now legally buy firearm parts, smuggle them over the border, and then assemble them in Mexico. Gun parts don’t have the sale restrictions or serial numbers that retail firearms do, so many firearms in Mexico are now untraceable. As usual with contraband, the thieves are way ahead of the cops.

Trafficking is hardly the only source of weapons here. Since 2006, Mexico has imported military-grade weaponry from more than 50 countries, according to the Igarape Institute’s Mapping Arms Data project. In 2012, the last year for data, the country imported $72 million worth of military-grade weapons for the armed forces, police, and private security firms.

Even more troubling than the ease with which guns enter Mexico is how easily they go off the radar. Arriaga from Desarma Mexico says tracking even legal firearms is “rudimentary” at best.

By law, Mexicans can own small caliber pistols and rifles as long as they are registered with this nation’s Defense Department. Carrying a gun outside of your property or beyond hunting areas, however, is very restricted. 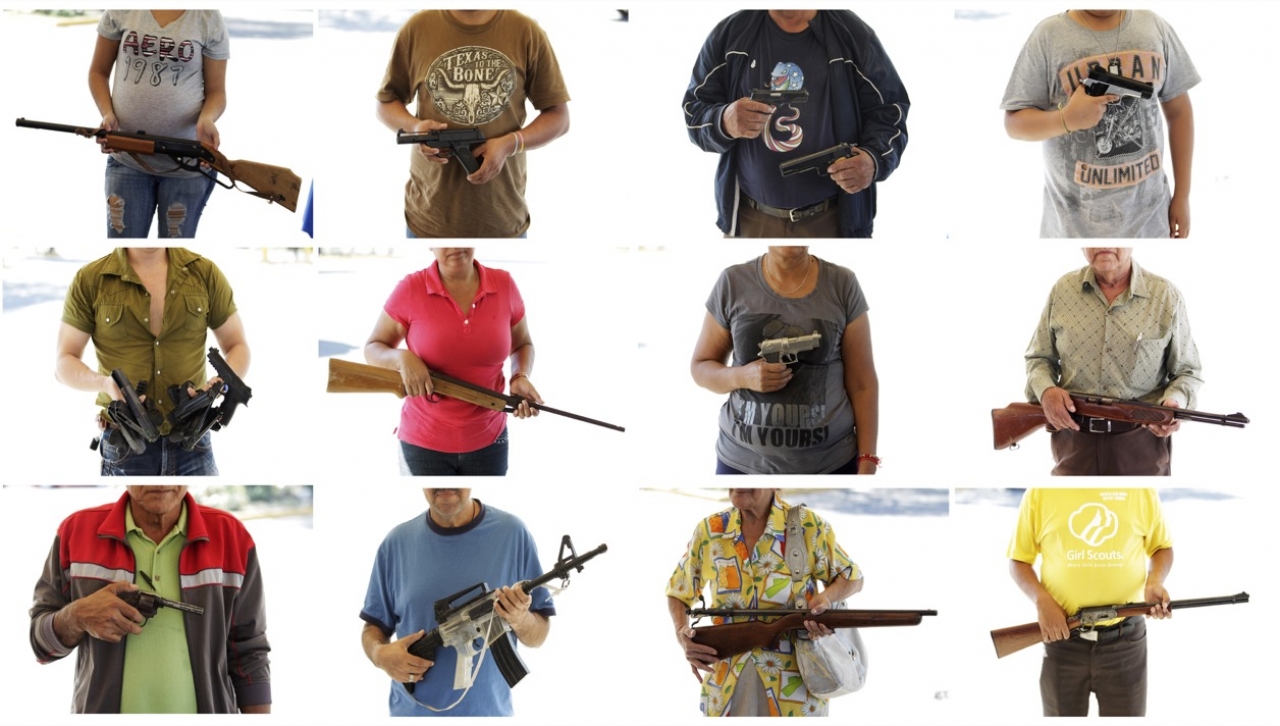 People posing with their guns and rifles before turning them in for Mexico's "voluntary disarmament program" in San Nicolas in Monterrey in early December 2013.

The gun culture here is nothing like it is north of the border.

Although accurate and recent data on Mexican gun-ownership are unavailable, Switzerland-based research group the Small Arms Survey estimated in 2011 that there were more than six times more guns per person in the US. And Obama's announcement in January of gun control measures sent firearm sales, and corporate shares, soaring.

When polled about the high rate of violence, three-quarters of Mexicans say they still wouldn’t want to own a gun for protection. For those who do want to purchase one legally, the only gun store is in Mexico City and is run by the army.

“Most people don’t want to do that,” dealer Javier says of the sole gun shop. “It’s faster and cheaper to get it from us, especially if you don’t want the gun traced back to you.”

The army is the only agency that tracks guns in Mexico. Arriaga once requested data from it on legal gun ownership. The army responded with the current numbers: about 3,000 valid licenses for individual firearm ownership throughout the country. But the army said it doesn’t track trends over time because “it is not necessary for the performance of [our] duties,” according to the freedom of information report received by Arriaga.

Nor does it organize information about firearm seizures or where those weapons end up. By law, all confiscated guns not used in an investigation must go to the army within 48 hours. No one audits this process.

Several Mexican agencies, including the army, did not respond to GlobalPost’s phone and email questions.

“If we don’t even have good control and registry of legal firearms in Mexico, the challenge of having control over illegal firearms is enormous,” Arriaga says.

Javier has an idea what happens to some of the guns confiscated by police or the military. Soldiers and cops, he alleges, are some of his suppliers.

“Say they recover 20 guns at a crime scene. They’ll record 10 as confiscated and sell the other 10 to us,” he claims. His business partner, who says he's an ex-solider, confirms the practice.

Granted, GlobalPost could not verify the arms dealers’ suppliers. If Javier and his associate are telling the truth, it’s anecdotal.

But while many Mexican law enforcement agents have been suspected of illicit rackets, the government does not offer evidence to confirm or deny officials participating in gun rings.

When asked, the army told Arriaga no soldiers have been sanctioned for the misappropriation or trafficking of weapons.

“This is a much more sensitive topic and it’s a difficult one to report or track because you are relying on authorities to report accurately,” she says.

Amid the opacity of firearms tracking in Mexico, one thing is clear: Drug cartels look like small armies now. In May 2015, the New Generation Jalisco Cartel terrorized Guadalajara for a day, blocking highways, burning banks and shooting an army helicopter out of the air. The group has even built its own assault rifles.

There may be a few reasons to be hopeful. Straw purchasers in the US Southwest could fall under more scrutiny with Obama’s recent executive action. The Multiple Sales Reporting Requirement has been an effective tool for identifying traffickers and has led to prosecutions.

But asked if he’s worried, Javier doesn’t seem to have considered the possibility of a gun shortage.

“New restrictions wouldn’t bother us. This is Mexico. If they close one channel we’ll just open up another,” he says.