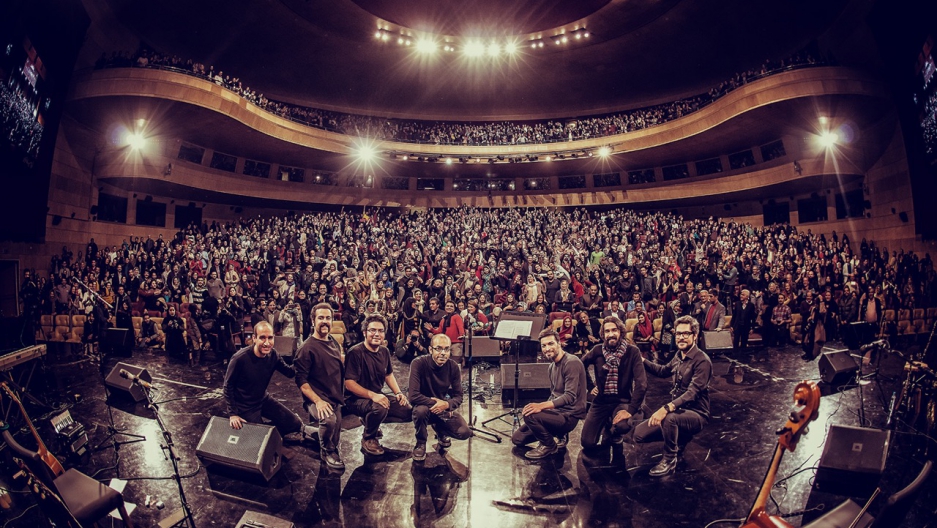 This was our first ever reporting trip to Iran and it didn’t take very long to realize that Tehranis love live music.

We saw buskers in the street, concert posters all over town and caught three different live shows.

And it was during those performances when it occurred to us that some of the stuff being played on stage these days in the Iranian capital — with the apparent blessing of the government's religious censors — is music that wouldn't have been tolerated not long ago.

The music of Pallet Band is a good example. The name, Pallet, by the way, is meant to evoke the many colors on a painter's pallet.

The band’s sound is part Iranian folk, part jazz, and part Led Zeppelin. It has a huge following in Iran.

We saw them in a packed house at one of Tehran's swankiest venues — the Milad Tower concert hall, capacity 3,000.

Pallett has been around the world, playing shows in Europe and America. And we were wondering about the difference between playing those gigs abroad — like the one they played at a jazz club in New York last year — compared to ones for the hometown audience in Tehran.

"Wwe have deep connections with our people, with our city, because we talk about — in our songs, we talk about the social issues. We talk about the issues of our generation. So, this kind of connection is something that maybe was missed out in New York. In New York, we were like strangers. And also they were the same to us,” said Nemati, who sports a handlebar mustache and is dressed in all black.

Because a lot of popular music was banned in Iran for years, Nemati says Pallet feels obliged to play contemporary and global sounds. That's what their Iranian audience now wants to hear. He adds that the censors at Iran’s Ministry of Culture and Islamic Guidance have been flexible.

"They have come to a compromise [about] what can be performed," he says.

Reaching that compromise wasn't easy, Nemati admits. For example, dancing is still forbidden at concerts, like the one at the Milad. 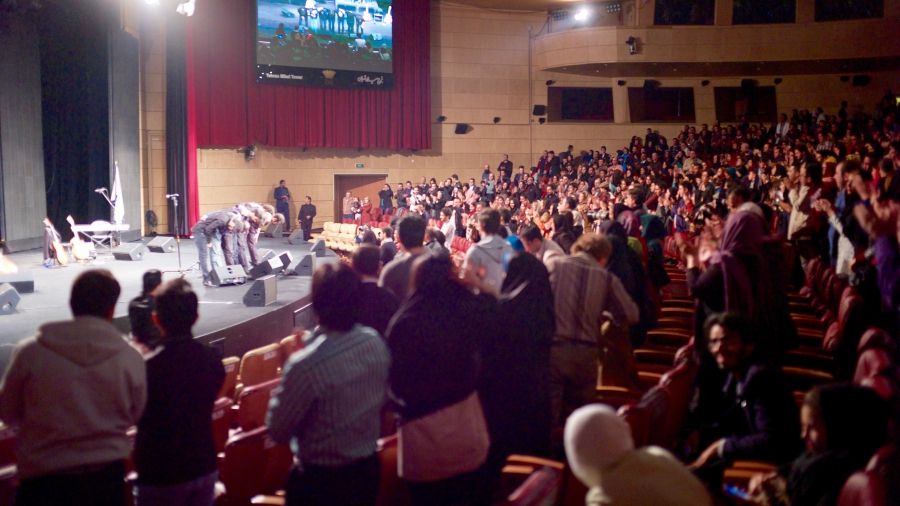 Pallett Band takes a bow at the Milad Tower concert hall in Tehran after a recent performance.

Nemati glanced over at the security guy who was standing in the doorway of the green room, and told us with a smile, “We're still working on that issue.”

It is worth saying, however, there seemed to be quite a lot of butts moving in seats during the Pallett show we watched. Chair dancing, as it were.

There is another component to Pallett's music, in addition to parts folk, jazz and Zeppelin, it also features a heavy dose of klezmer.

And the audience absolutely loves it.

Klezmer, of course, is associated with Jews from eastern Europe. Iran's leaders have made no secret of their hatred for the Jewish State of Israel. So, we asked Pallett’s clarinet player, Rouzbeh Esfandarmaz, about the apparent contradiction of hearing Jewish music on a big government-approved stage in Tehran.

"I don't think that klezmer is very much related to Israel itself. It is related to Jewish culture and the Jewish people who live there, but we are also forgetting the Bulgarians, the Albanians, and the Russians, from Polish people, and on and on,” Esfandarmaz says.

“And of course the gypsies,” he adds. Esfandarmaz says Iranians feel connected with the gypsies that traveled from India to Spain.

Esfandarmaz says members of Pallett Band made a collective decision to take off their political glasses, so to speak, and just play the music they love.

No matter where it comes from.

When the Iranian government a couple of years ago decided to forbid visuals of actual instruments on state TV, Pallet went on a competing network and mimed playing their instruments, while one of their klezmer tunes played in the background. Here's the video.