This is America's image of hard times.

"Migrant Mother" was one of thousands of pictures Dorothea Lange took on assignment for the federal government, documenting the poverty of the Dust Bowl. But this was the one that stuck,coming to symbolize all those suffering in the Great Depression. Later, Lange would complain, "People think I haven't made anything else!" 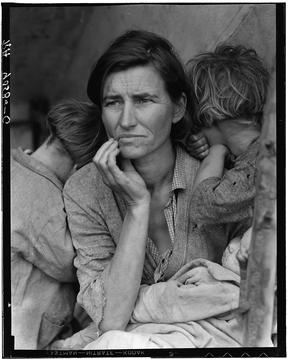 The retouched version of Dorothea Lange's photo of Florence Owens Thompson and her children, taken in 1936 in Nipomo, California
(Dorothea Lange | Library of Congress)

Lange had been a portrait photographer in San Francisco, posing the city's wealthy and successful, and her compositional instincts helped turn Florence Thompson into a Madonna figure. But because the photo was commissioned by the government, it wasn't copyright-protected. And over time, as her image was endlessly reprinted, adapted, satirized, used in ads for perfume and luggage, Thompson grew bitter.

Can any single image taken now ever imprint itself on our consciousness the way "Migrant Mother" did? "Great images will continue to bubble to the top," says Sarah Meister, a photography curator at the Museum of Modern Art in New York. "Although in this era of image proliferation,it's harder and harder." But photographers will still look to images of hardship to find deeper truths. "Who's that woman?" wonderedLaToya Ruby Frazier, a photographer and MacArthur Fellow, when she first saw "Migrant Mother" in photo history books. "How did it help her reveal what was happening in those moments for her and her family?"

Unlike Lange, who spent only moments with Thompson, Frazier has spent years photographing herself, her mother and grandmother, and the physical decline of their community --- pictures that were collected in the book "The Notion of Family."Frazier comes from Braddock, Pennsylvania, a dying steel town. In one diptych image, she shows her mother during a test for epilepsy, and the hospital being torn down. "If I am living in this industrial ruin that has been abandoned, and there's no one here from the media covering this and no one telling our story, how do I pick up the camera and start to document it?" 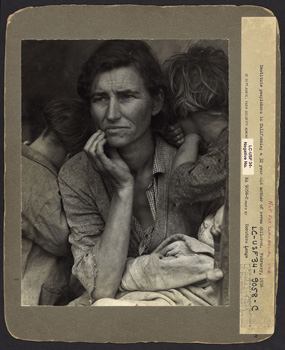 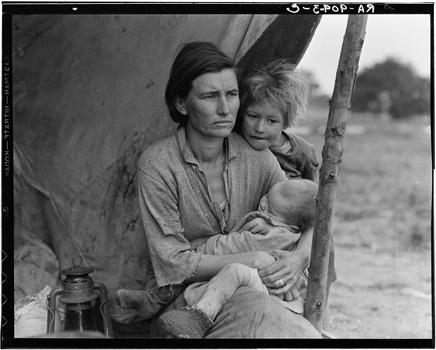 Another shot by Lange. The original caption for the photo read "Nipomo, Calif. Mar. 1936. Migrant agricultural worker's family. Seven hungry children. Mother aged 32, the father is a native Californian. Destitute in a pea pickers camp, because of the failure of the early pea crop. These people had just sold their tent in order to buy food. Most of the 2,500 people in this camp were destitute."
(Dorothea Lange | Library of Congress, Prints & Photographs Division, FSA/OWI Collection, [LC-USF34-9093-C (film negative)]) 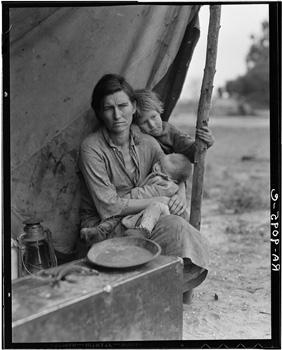