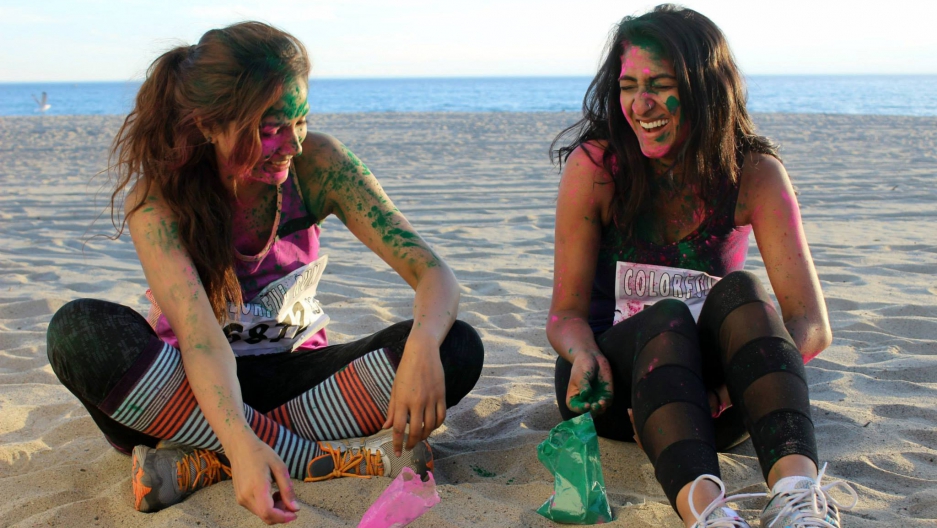 Aziz Ansari's character on Master of None was told there can't be two Indian main characters on a show. Meena Ramamurthy got the same advice, in real life. But her web series, The Fob and I, does it anyway. Leads Jisha (Uttera Singh) and Sita (Shefali Deshay) play cousins living in Los Angeles.

Meena Ramamurthy/The Fob and I

Meena Ramamurthy is a filmmaker and storyteller. A colleague, another writer of color, once told her: "Don't write a pilot with two people of color."

"It doesn't come from a bad place," Ramamurthy says. "It just comes from experience."

If you've watched "Master of None" (the "Indians on Television" episode), this probably sounds familiar. Studios, investors, networks — they have not caught up to the changing demographics of their audience. And in the meantime, they're having a hard time bridging the gap between a new generation of storytellers and their old formulas for what works.

So stories with two lead characters who are Indian? They get left behind.

An annual report from USC, Ramamurthy's alma mater, quantifies the issue. The study, by the Media, Diversity and Social Change Initiative, drilled down into the content of 10 major media companies. The results may not be wholly surprising. This year, they found that, "The film industry still functions as a straight, White, boy’s club." Further:

No platform presents a profile of race/ethnicity that matches proportional representation in the US. Over 50% of stories featured no Asian speaking characters, and 22% featured no Black or African American characters. The complete absence of individuals from these backgrounds is a symptom of a diversity strategy that relies on tokenistic inclusion rather than integration.

Ramamurthy, 29, just finished her masters in film production. She grew up in a Texas bordertown, McAllen, where she did not have much exposure to other Indian Americans.

As her final project she created a web series about two women of color.

"The Fob and I" centers on Jisha, who moves to Los Angeles from India to live with her cousin, Sita, who grew up in America. (Yes, not too different from the rejected Indian "Perfect Strangers" show pitched to Aziz Ansari's character in "Master of None." This one doesn't make a caricature of the immigrant cousin, though.)

The show flies in the face of the advice she's gotten, and her own experience. She remembers pitching a show pilot to some of her professors. It was about a tech startup and many of the characters, like in real-life Silicon Valley, were were Asian America. The question she got was, "Why do we pay attention to the race of the characters and why is that important to the story?"

To her, it was a question that came from a place of lack of awareness of current diversity in America. (Shortly afterward, Silicon Valley on HBO began, with one main character from Pakistan plus one Asian side character who speaks broken English.)

Michael Fink, a professor at USC School of Cinematic Art, says Ramamurthy was part of the second group of students he has engaged in a "webisode" class, where students create stories specifically for short-form, web consumption. The class is backed by production company New Form Digital, which funds several student pilot projects each year. This kind of storytelling is creating more spaces for taking risks, making a bigger marketplace and making it easier for people to get into the business.

Still, his school's faculty is predominantly white, reflecting the demographics of people who come though the industry. Fink, 73, thinks things will change.

“Finally Hollywood is waking up. Finally, it’s really paying attention to this,” he says. “Nobody really wants to watch a white family in suburbia anymore, except for maybe Modern Family."

“For us, we do actively look for a diverse group of students," he says. "What we’re doing is just reaching out in a much more active way to students of color, to women, to apply.”

Ramamurthy, though, says that hope for change is just part and parcel of being a filmmaker. "I think the film industry is an industry of having to be hopeful, of having unrealistic expectations," she says. "When you go your own way, there is an audience. Then the big leagues start to pay attention." "The Fob and I" started to gain traction when it caught eye of the popular Angry Asian Man blog.

Mukesh Vidyasagar, a filmmaker and product manager at the digital enterntainment company Fullscreen, says studios and executives are starting to show interest in diverse voices, but they are nervous about how they are going to market and sell those products.

"I think people are just looking for the next interesting voice. If that voice happens to be Indian, they will jump all over it. Green is the only color they're thinking about," he says. "That's part of the reason I think you're starting to see filmmakers just go make stuff."

Ramamurthy will keep finding ways to make films, even if she has a day job or doesn't have huge budgets. "I think that my trajectory right now is really to try and tell stories that haven't been told, that we don't see," says Ramamurthy. "If we can be part of the entertainment landscape, we can be part of the country."

For her next project, she's co-writing a new pilot: a low-budget feature about three friends who move back home after the 2008 recession. And open a restaurant.

Three episodes of "The Fob and I" are on their website, with two more to come.

Of one episode, "The Bollywood One," Ramamurthy says: "I think that when Americans think of India they automatically think of Bollywood. We wanted to do something that spoke to that but was kind of tongue-and-cheek."