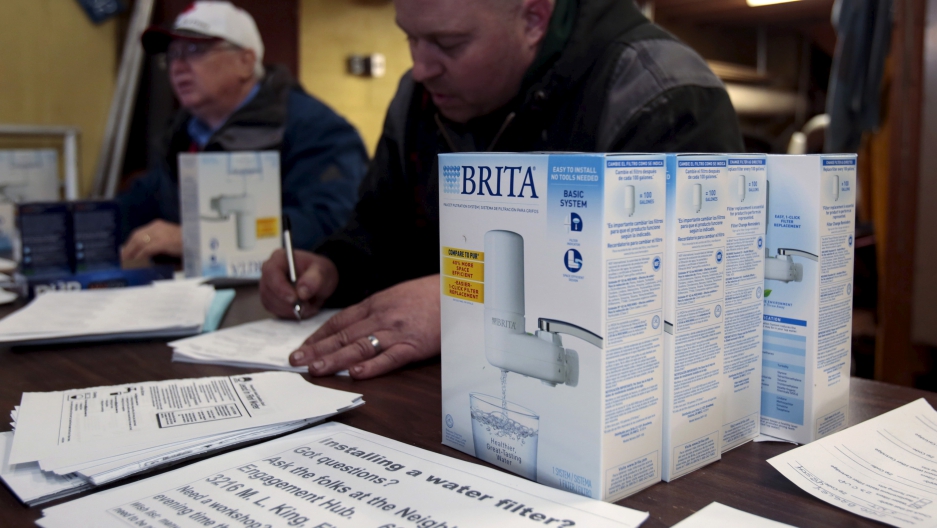 Water faucet filters are distributed to Flint residents at a distribution center in a fire station in Flint, Michigan on Jan. 13, 2016. Undocumented immigrants in Flint have been slow to get information about lead poisoning and resources in the city's water crisis.

Flint, Michigan has been home to Carolina and Elias since they moved there from Mexico 14 years ago. Still undocumented, the couple has found work in restaurants and construction and is raising four girls.

It’s exactly the life they had wanted to give to their children. They are poor but their daughters are getting an education and other opportunities they wouldn’t have had in Mexico.

But now the couple is worried about their children’s future. They’re panicked that their four girls could suffer consequences of lead poisoning from having consumed Flint’s contaminated tap water for almost two years.

Families across Flint are grappling with the same grim scenario, but the around 1,000 undocumented residents like Carolina and Elias (who requested that I only use their first names) are especially vulnerable. The mostly Spanish speaking community has been among the last to learn about the dangers of lead in the water. And once they are informed, their lack of papers makes it difficult for them to get lead testing and other services.

I met Carolina at their small house in East Flint, a run down area of the city where many undocumented families live.

She told me she had only just learned about the lead in the water around Christmas. That was seven months after Flint resident Lee Ann Walters found out her son Gavin had lead poisoning and three months after Genesee County finally issued a lead advisory.

She did hear something about water contamination back in April, but didn’t know it had anything to do with lead. She quit giving the family tap water to drink at that time but still used it for everything else, including bathing and cooking. Boiling can concentrate lead in the water. 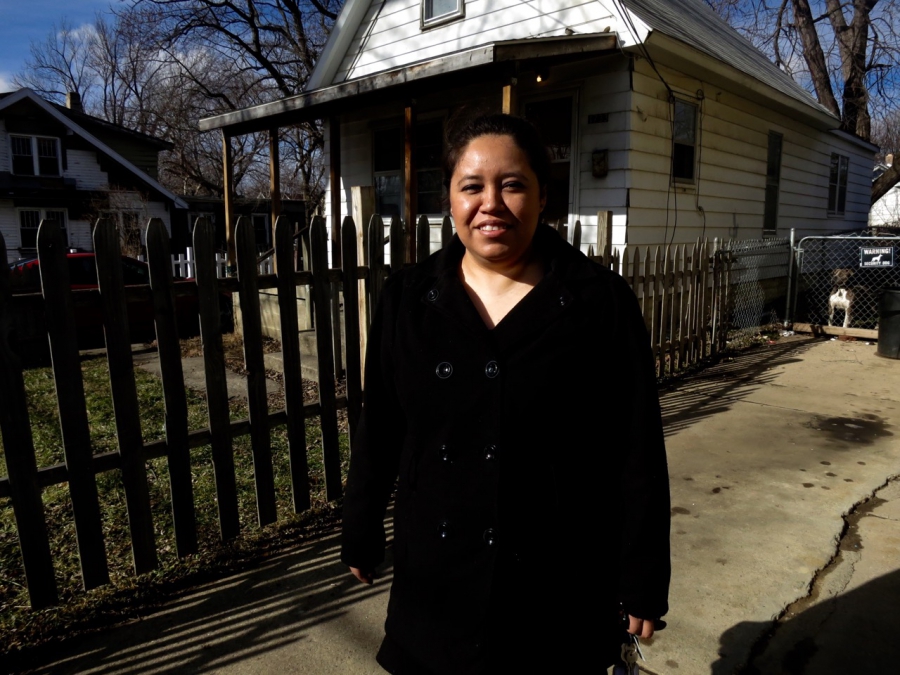 Juani Olivares moved to Flint from Mexico when she was 10 years old. Now she helps undocumented residents in East Flint deal with the city’s water crisis.

According to Juani Olivares, an advocate for undocumented Latinos who herself arrived as an illegal immigrant to Flint from Mexico when she was 10 years old, the community wasn’t informed because all official public messaging about the crisis was in English. In addition, there’s no Spanish radio or TV in Flint so people weren’t learning much from media reports.

The day I met Carolina in early February she had only just received a flyer about lead poisoning in Spanish. It was the first printed information she had ever seen about the hazard.

She read the list of symptoms and possible long-term consequences to me out loud in Spanish — growing more and more concerned. Lead poisoning can cause lowered IQ, learning disabilities and aggressive behavior, among other maladies.

One of her daughters has complained for months about body aches and headaches, which can indicate lead poisoning.

“I thought it was just stress,” Carolina says, “But now I’m not so sure.”

She was even more upset about her one-year-old because she was consuming the water during her pregnancy. Lead in the mother’s blood can be transferred to the baby in vitro and later through breast milk.

Now Carolina uses only bottled water for everything for the entire family but she agonized when she thought about the past months before she knew.

“As a mother I don’t want to believe that I hurt the baby that was inside me. Why didn’t they say anything?” she says, holding back tears. “If they would have told us the water was contaminated we would have done things differently.”

More from the Flint water crisis

Getting services has been another challenge for undocumented residents. Sometimes the services are restricted and sometimes the residents are just nervous about going to a location where authorities might ask them for ID, according to Olivares.

“They cannot receive any health services because they don’t have insurance or a valid ID so they are being denied those services, getting tested for lead,” Olivares told me.

Something had to be done, so Olivares founded the Genesee County Hispanic/Latino Collaborative and began seeking a solution. She says the county has agreed to begin offering insurance to all people who can prove residency, regardless of immigration status. Enrollment is set to begin this week.

Seeing the conditions in Flint and what her family has been exposed to health-wise I had to wonder if Carolina and her husband wouldn’t consider moving the family to another state — or even back to Mexico.

“Leaving or moving to another house isn’t going to get rid of this,” she says, “The harm has been done.”

Besides, they can’t afford to move she says.

How about Olivares? Would she leave?

Before meeting Carolina, Olivares had shown me around East Flint where she had grown up. All the schools and houses where she has wonderful memories from her childhood in the 90s and 2000s are either boarded up or torn down completely, including her childhood home, which is now an empty lot not far from Carolina’s house. Since GM pulled out of Flint in the late 80s, the city has been in decline. The University of Michigan has a strong outpost in town and some other sectors are growing, but much of the city’s once solid middle class neighborhoods are in shambles. Now, with the water crisis — its future is even more uncertain.

“I have considered leaving,” she says, “But not now. It won’t be until I know my people have been taken care of.”