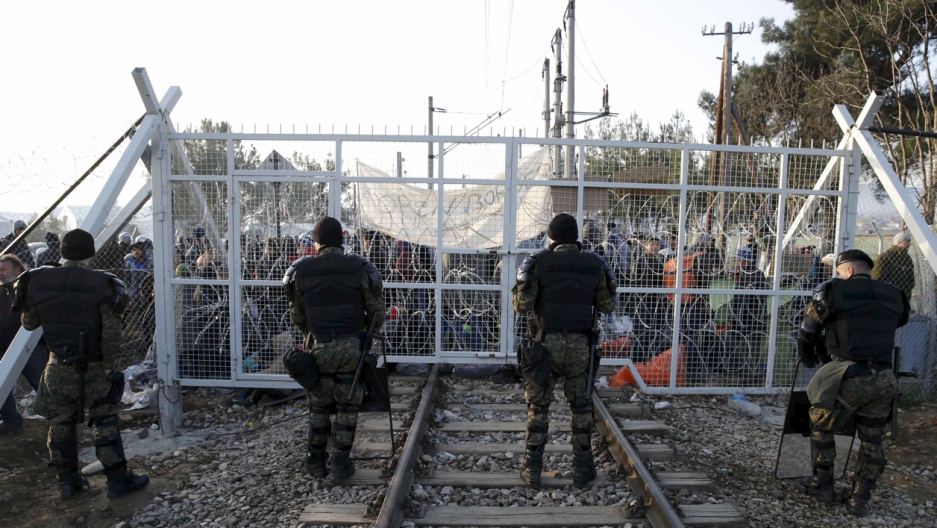 Macedonian policemen stand in front of a gate over rail tracks as migrants wait behind at the Greek-Macedonian border, after additional passage restrictions imposed by Macedonian authorities left hundreds of them stranded near the village of Idomeni, Greece on February 23, 2016. The picture was taken from the Macedonian side of the border.
Credit: Marko Djurica
Share

European countries' "shameful" response to the migrant crisis and their efforts to counter the threat of attacks risk undermining their historic commitment to human rights, Amnesty International warned on Wednesday.

The London-based campaign group, traditionally more used to lambasting dictatorships for rights abuses, used its annual report to take some of the world's oldest democracies to task.

Several countries in the European Union's passport-free Schengen area have reimposed border controls in response to a huge wave of migrants and refugees fleeing war and persecution in the Middle East, Africa and South Asia.

"That Europe, which is the richest bloc in the world, is not able to take care of the basic rights of some of the most persecuted people in the world, is shameful," said Amnesty Secretary General Salil Shetty.

He called for safe, legal routes for people to reach Europe and said they should be treated on a case by case basis, not subjected to "collective punishment."

The measure allows the interior minister to place under house arrest any person whose behaviour is considered "a threat to security and public order" and to order searches of homes at any hour without involving the court.

"Everybody understands that the French government has to respond to this reality. But a government that has historically championed human rights can't take shortcuts."

More broadly, Amnesty warned that the international system that protected human rights was itself under threat.

Many governments were ignoring, undermining or using their vetos to reduce the impact of protections afforded by the United Nations, the International Criminal Court and other regional rights mechanisms, the group warned.

"The Syrian conflict is one horrific example of the catastrophic human consequences of a systemic failure of the UN to fulfil its vital role in upholding rights and international law and ensuring accountability," it said.

Shetty added: "The system that has been very carefully built over 70 years to protect human rights now needs to be protected from a wholesale attack."

He urged world leaders to provide more political support and funding for the systems that uphold international law, and to back a reforming new UN secretary general when Ban Ki-moon's term expires at the end of this year.