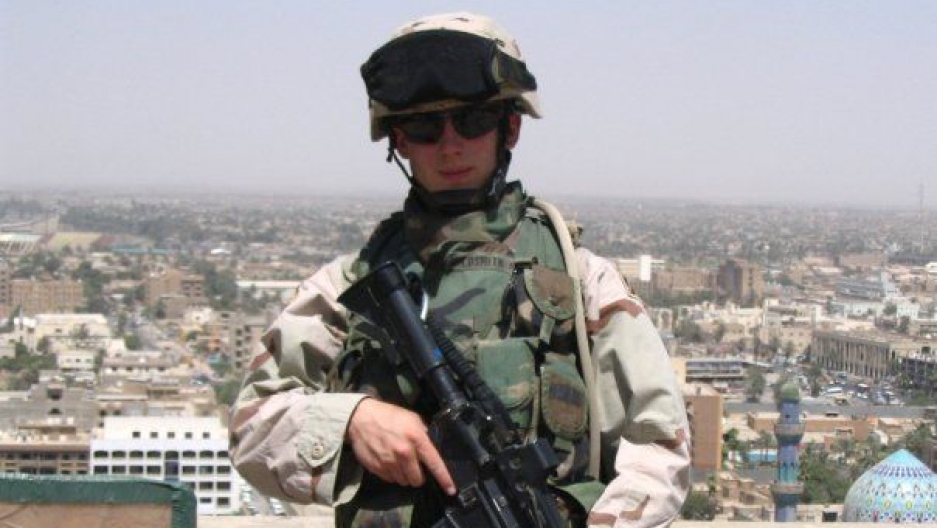 Iraq war veteran and Army Sergeant Kristofer Goldsmith was written up in 2007 for missing his flight to Baghdad. He had attempted suicide the night before.

Back in 2005, Kristofer Goldsmith thought he was prepared for war. Just 19 years old, the Army sergeant deployed to Iraq with the Third Infantry Division. It was a moment he had been waiting years for.

“I wanted nothing more but to be in the military my entire life, from the time that I was a little kid,” he says.

Goldsmith’s assignment was to act as a documentarian and intelligence collector for his platoon. He wound up photographing mass graves, dead Iraqi police officers and dead children.

“It was something that I wasn’t prepared to deal with,” he says. “Even when I got home, PTSD was little more than an acronym to me — I didn’t understand what it meant. I didn’t understand the way that it would haunt me for years, and possibly the rest of my life.”

In 2014, more than 530,000 service members received treatment for post-traumatic stress disorder at facilities run by the US Department of Veterans Affairs. Before he even left the military, Goldsmith says PTSD began to affect his life. He was written up in 2007 for missing his flight to Baghdad for his second deployment. The reason why Goldsmith wasn't on that plane? He was in a hospital after attempting suicide the night before.

Goldsmith was hit with a misconduct charge for missing that flight, and he was subsequently forced out of the military with a a general discharge — one rung below the honorable discharge that entitles veterans to full benefits. Because of his discharge status, he’s been denied access to healthcare services from the Department of Veterans Affairs.

“The Army knew why I missed my flight — when I survived my suicide attempt it was at Fort Stewart, Georgia, and I was found by military police,” he says. “I struggled for a year and a half, getting almost no help at all from the Army when I was asking for it, desperately.”

But Goldsmith’s case is not unique. Though 85 percent of the more than 2.5 million veterans of the Iraq and Afghanistan wars have been released from their service with honorable discharges, 300,000 have been forced out of the military with discharges that are below honorable on the military's scale. The US government has acknowledged that some of these discharges were the result of PTSD.

Goldsmith says that the military could have prevented his suicide attempt, but failed to act when his cries grew louder.

“Even when I told an Army psychiatrist that I was thinking about suicide, she told me that I had three choices,” he says. “She told me that I could one, suck it up, be a man, and I could deploy; two, I could go AWOL and live like a convicted felon for the rest of my life; or three, I could give up and commit suicide. Those were the suggestions that an Army psychiatrist offered me when I told her how I was feeling after struggling for so long with nightmares from Iraq.”

When Goldsmith approached the US military and asked that his discharge status be changed because of his untreated PTSD, the Army rejected his appeal. He has spent the last eight years trying to get Washington to recognize that PTSD is often the source of the behavior that gets many vets pushed out.

Congress has tried to put a stop to this practice — Section 512 of the 2009-2010 National Defense Authorization Act says the Defense Department may not issue a discharge other than honorable if the service member has been diagnosed with PTSD or a traumatic brain injury. But since 2009, more than 20,000 soldiers with mental health problems have been dismissed for misconduct. Without an honorable discharge, veterans typically cannot receive VA benefits.

"I think it's damn near criminal that you could take a person, send them to war, they come home sick, and then you don't even provide them healthcare once they get home," Goldsmith says.

“Secretary Hagel’s memorandum was too narrow — it doesn’t effect my generation at all,” he says. “Today, the discharge review boards, they’re still not recognizing PTSD the way Secretary Hagel intended.”

Goldsmith says lawmakers in the House and Senate are signing on to the Fairness For Veterans Act, which he says will be formally introduced at the end of this week. He hopes to get others to sign on on to the bill, and is trying raise awareness among the public.

“We could use all the help in the world,” he says.