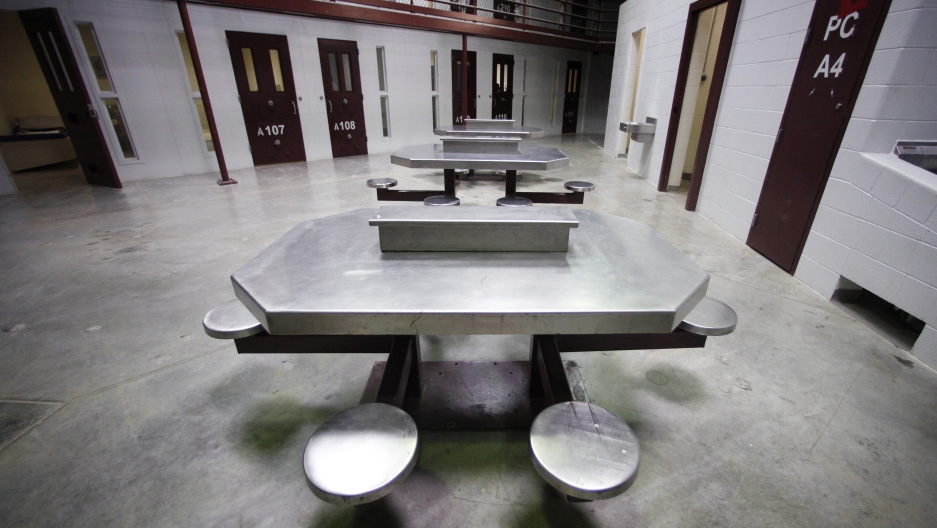 The interior of an unoccupied communal cellblock is seen at Camp VI, a prison used to house detainees at the U.S. Naval Base at Guantanamo Bay, March 5, 2013.

President Barack Obama laid out a plan today to close the detention center at Guantanamo Bay in Cuba.

"This is about closing a chapter in our history. It reflects the lessons that we've learned since 9/11. Lessons that need to guide our nation going forward," he says.

It's something he's been promising to do since his first month in office, back in 2009.

Time's running out. The general feeling on the island base right now is one of uncertainty.

"We have military commissions going on at this moment in the 9-11 case," says The Miami Herald's Carol Rosenberg. "And everybody is wondering if they are going to try and pick up the men accused of plotting the September 11 attacks and put them in a military commission somewhere on US soil."

Rosenberg says people working at the facility keep plodding along. Most work a six to nine month stretch. But they have no idea if the president will be able to follow through on his plan. "It envisions transferring away 35 of the last 91 detainees who are cleared for other countries and then having, at most, 56 detainees who would be sent to the United States."

The plan doesn't tell us where the men would go — the US government has examined 13 sites. Rosenberg says in the report the government is considering building a new iteration of Guantanamo at a military base on the mainland. "That's effectively what they did in 2002 when they brought these captives to Guantanamo," she says.

There are plenty of stumbling blocks for the plan to clear. Congress has told Obama, no, they can't come to US soil. Rosenberg says Congress would have to either change their mind, or the president would have to decide that he has commander-in-chief authority to move the detainees on his own. "If he does this, there is the expectation that members of congress will go to court and say, 'This is illegal.'"

When, and if, the government picks a new site to house the detainees there could also be local opposition. No one likes a terrorist next door.

"Unless they have something they are going to speed build in a base, or if they already have something on a base and they are willing to ignore local opposition ... it's very hard imagining them getting this done."

To clarify, this move would only apply the portion of the Guantanamo base that houses the detention center and the war court. The military base — a persistent point of contention with Cuba — stays.