The water crisis in Flint, Michigan, has raised questions about the state of our nation's water supply, but scientists and officials tell us that most of our water systems provide safe drinking water.

Even so, Americans still consume more bottled water than any others in the world. We buy an estimated half a billion plastic bottles of water every week — and many of them end up in landfills.

San Francisco is looking to reverse the trend. The city has introduced a ban on the sale of single-use plastic water bottles on city-owned property, which this October will be extended to include events held outdoors on public property, and by January 2018 the ban will be broadened to include large-scale events of 250,000 people or more.

With its measure, environmentally-friendly San Francisco is following the lead of Concord, Massachusetts, which took on the challenge of plastic water bottle waste first — and developed a solution that goes much further.

In April 2012, Concord residents voted to ban the sale of single-serving plastic water bottles and the measure went into effect in January 2013. The ban was Jean Hill’s idea. The 88-year-old says she was inspired by her grandson.

“He said, you know grandma, there are big things circling around in the water that are as big as Texas and they’re full of plastic trash and I finally realized that these gyres, these circular currents, are full of plastic trash,” Hill says. “And there’s a fish called a lanternfish that eats it and then it gets into the food chain,” she explains.

Even with widespread recycling, an estimated 2 million tons of plastic water bottles end up in landfills every year. Hill was convinced that banning the bottles was the best way to tackle the problem, but she says the International Bottled Water Association fought her tooth and nail and some local merchants were also against it, including the owner of the local grocery store, Crosby’s Marketplace. But when the ban passed, Crosby’s and all the local businesses complied.

At Crosby’s in Concord, there is just a fraction of the water for sale that you will typically see in most grocery stores.

Concord residents sometimes complain about the ban, because it allows small bottled sugary drinks to be sold, but not healthy water. The ban that San Francisco is phasing in over four years is not as far reaching as Concord’s. Retailers in the city will still be able to sell water in plastic bottles in stores, but environmental advocates see it as an important first step.

Concord residents have some advice for San Francisco or any city or town that wants to make a bottle ban work. 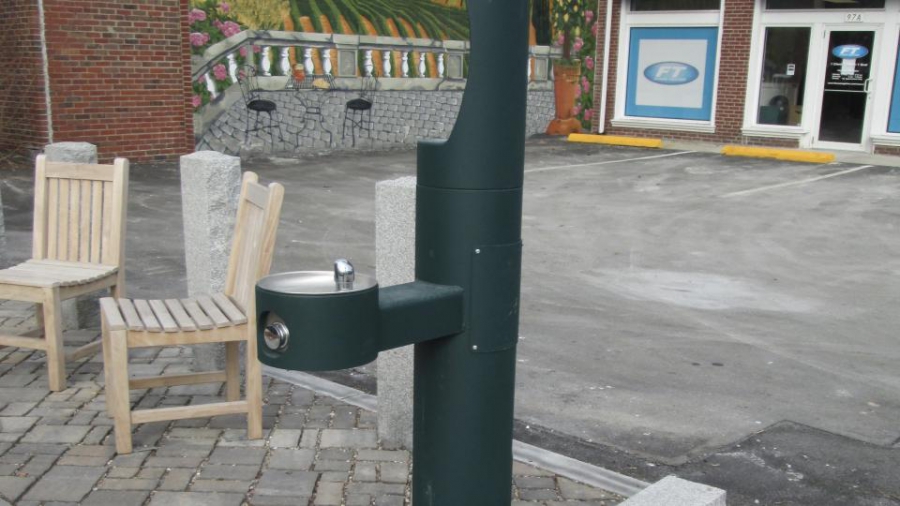 Concord’s town manager, Chris Whelan, suggests installing a lot of drink tap stations – the next generation of water fountains that can be easily used to fill up reusable water bottles.

David Chiu, the lawmaker behind San Francisco’s ban and a member of California’s State Assembly, says he’s working on that.

“We have city departments that are figuring out where we need to give the public more access to water,” Chiu says. “We’re building more drink tap stations throughout the city, but particularly thinking about our park areas and other open space areas to make sure that people have access to water that doesn’t involve using a wasteful plastic water bottle.”

Whelan also encourages Concord residents to carry their own reusable bottles, especially to outdoor events such as the town’s big annual July 4 picnic.

“Our water department has purchased and made available a multi-filling station so that at large events there’s a product that’s available that could fill the water bottles. I think it’s 8 different parties that can be filled all at the same time,” Whelan says.

This won’t be an issue in sunny San Francisco, but during the long New England winter months, Concord has to turn off all its outside water fountains to stop the pipes from freezing. Some local businesses have helped out with many offering tap water free of charge through a marketing initiative called “Concord on Tap.”

“I would recommend that San Francisco focus on the high quality of its own tap water,” Appel says.  “We’ve all been subject to 30 years of aggressive marketing by the bottled water industry to make us distrust our tap water, when I think that the truth is exactly the opposite.”

Some people drink bottled water because they think the quality is better, but that is not necessarily true. Lawmakers in San Francisco say that an estimated one third of bottled water is repackaged tap water. Chiu says billions of dollars have been invested into his regional Hetch Hetchy water system, and San Francisco is on a mission, much like Concord once was, to educate local residents about how pristine and cheap it is.