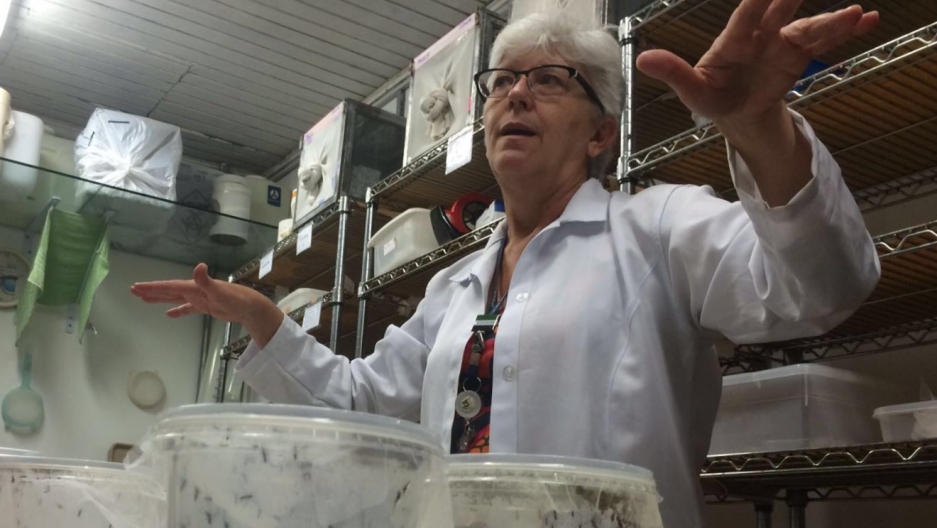 Margareth Capurro in the lab where stores mosquitoes used for research at the University of Sao Paulo in Brazil.

There’s a room at the University of São Paulo with between 10,000 and 15,000 mosquitoes in it. If you’re very quiet, you can hear them buzzing.

This is where mosquito researcher Margareth Capurro is trying to figure out the best strategy to reduce the type of mosquito, Aedes aegypyti, that carries Zika and other dangerous viruses. The bugs live in plastic containers and screen cages behind a double-doored vestibule, doors built to trap them if they escape from their containers.

The Brazilian government says somewhere between 400,000 and 1.5 million people in the last year may have been infected with Zika, carried by mosquitoes like these. The goal in Capurro’s lab is to find ways to make the mosquitoes combat the virus rather than help spread it, by genetically modifying them or finding a target for a niche insecticide.

Capurro has been a mosquito researcher for nearly 30 years. Recently, she’s worked on genetically modified sterile male mosquitoes. But in December, she shifted some of her focus. She joined the “Zika network,” a collaboration of about 40 labs studying all different aspects of the virus, from its connection to microcephaly to its transmission.

She’s overseeing the mosquito research and receiving specimens from collaborators around Brazil to study their genetic differences.

“If we have mosquitoes that are susceptible ... and mosquitoes that are totally immune — the idea is to compare the genome between them to see which is the difference,” she says. “Because if we have this information we can have targets for insecticides, or modifications to block the transmission of the disease.”

However, it’s unclear if this method of population replacement can be scaled up. Critics question its efficacy and sustainability as a solution for an insect that breeds as rapidly as the Aedes aegypti mosquito.

Capurro is also experimenting with what she calls a “suicidal” mosquito that would self-destruct if it were infected. Again, there are very real concerns about the unintended consequences of releasing genetically modified mosquitoes into the wild. Those concerns would have to be addressed by regulators before even early-stage field testing could start. That is, if it works.

“If (it) works,” Capurro reiterates. “This is the problem. This is science, you know — you never know.”

All of Capurro’s research is in its earliest stages, so it would be years before any of it could make it out of the laboratory and actually help people, primarily the pregnant women living in fear of the virus and its possible link to serious birth defects.

Still, she thinks it’s important to do a lot of basic science research to try to control the Aedes aegypti mosquito in the long-term. It carries not only Zika, but also dengue, chikungunya and yellow fever.

“I always say that about mosquitoes, or about dengue, or about the disease. We need to think as a general,” she says. “It’s a war. We need to send everything that we have, not only soldiers.” 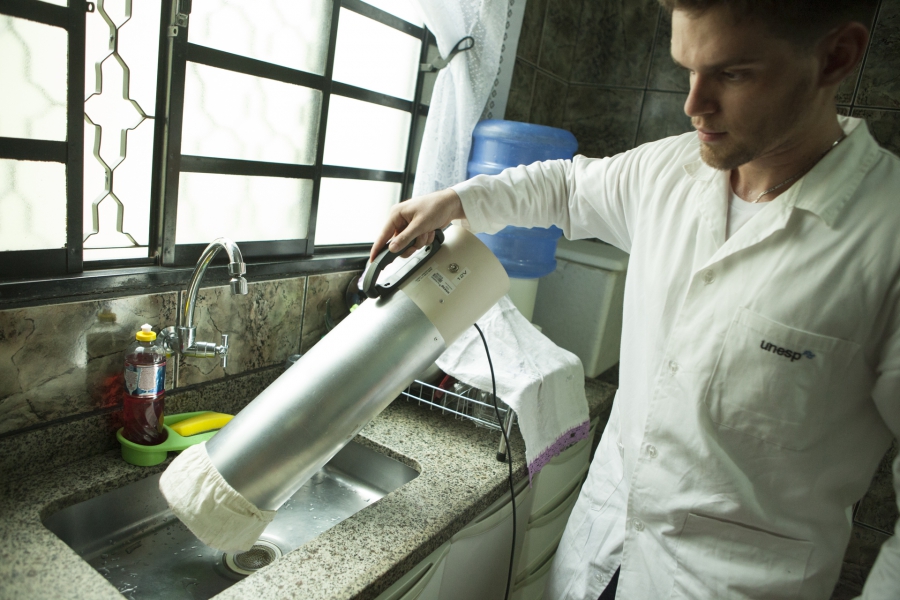 After leaving Capurro’s lab, I wanted to get to the source of the problem, where mosquitoes are actually infecting people and being gathered up for research.

So I traveled northwest from São Paulo for about three hours to meet up with Adriano Mondini, a professor at Universidade Estadual Paulista, in the city of Araraquara.

We met outside the house of a patient who tested positive for dengue, where Mondini and his team were collecting mosquitoes to test them for the virus.

Mondini’s student, Paulo Lopes, walked around the house with a lightweight metal vacuum tube, trying to suck up mosquitoes where they like to lurk.

Mondini will also test the mosquitoes Lopes collects for Zika, as he’s been doing with new samples since January.

Because the national infection rate figures for Zika are such rough estimates, researchers here are trying to get a better local count, while at the same time handing over mosquitoes and Zika virus samples for lab work.

In fact, as of last week, there were two confirmed cases of Zika in Araraquara.

In an example of how health workers are often at the front lines of emerging health threats, one of those infected was Mondini’s graduate student, Arianne Gusmao. Gusmao diagnosed herself when she was showing another student how to draw blood, and drew some of her own to test.

Zika may be a mysterious and scary virus. But the old mosquito-borne threat, dengue, is much more deadly. It killed nearly 900 people in Brazil alone last year.

I asked Mondini which virus worried him more.

“We had like 35 years of dengue transmission in Brazil, and millions and millions of cases, and deaths are going higher each year,  so I think I have answered your question, haven’t I?” he says.

Still, he thinks there could be some good that comes out of the Zika scare. New money for mosquito research is coming down from the state government of São Paulo. That could help the fight against dengue and chikungunya, as well as Zika.

Back in her office in São Paulo, Margareth Capurro told me she was starting to plan for retirement when Zika came to Brazil. That idea has been shelved.

“It’s a kind of time that if I can contribute with mosquito control. I am very happy, you know, that’s it,” she says.