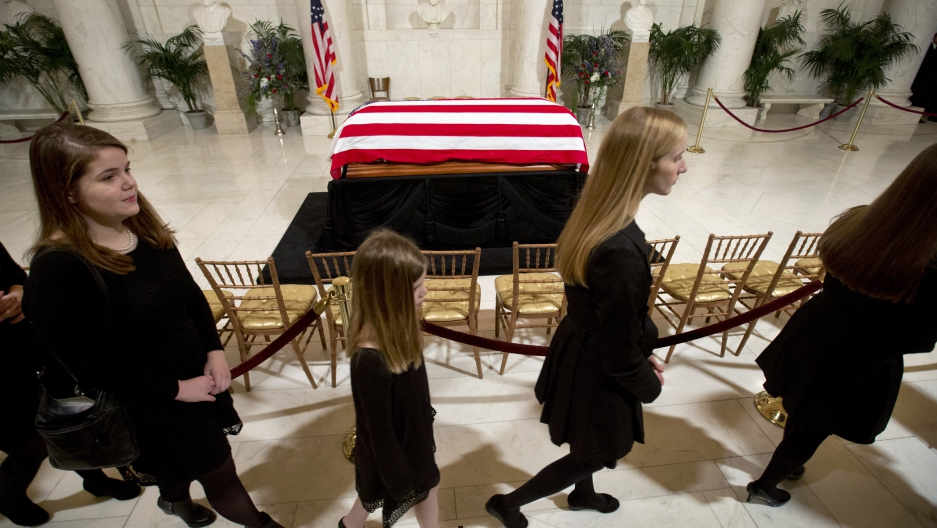 Relatives pass the casket as they leave a private ceremony in the Great Hall of the Supreme Court where late Supreme Court Justice Antonin Scalia lies in repose in Washington February 19, 2016.

Justice Antonin Scalia was buried this weekend — after spending Friday in repose in the Supreme Court building, surrounded by the busts of Chief Justices from the past.

But Scalia won't be remembered for his funeral. His longest legacy will be the opinions he's authored over the years. Here are some of his best — and worst — moments from 30 years on the high court.

"Dealing with the detention of an American citizen, ... both Scalia and Justice [John Paul] Stevens pointed out that the government had two choices: Treason or suspend habeas corpus," he says. "It was a nice opinion. It made very clear what the constitutional rules were. I think it was creative, it was something very few people saw, but when you read it it was rather convincing."

"In his last years on the bench, Scalia increasingly turned to insult, rather than argument," Graber explains. "Obergefell has a great many insults, but it really does not engage with Justice Kennedy's arguments. There are weaknesses in the argument, but Scalia preferred to write for the 5 o'clock news rather than engage in a way that lawyers might appreciate."

Lee Liberman Otis clerked for Justice Scalia after his appointment to the Supreme Court and is now the senior vice president of the conservative Federalist Society. She believes the 1988 decision Morrison v. Olson, which ruled the Independent Counsel Act constitutional, was one of Scalia's finest opinions.

A decade later, the case opened the door for Kenneth Starr to investigate President Bill Clinton.

"At the time, it looked like a big loss for the separation of powers but, over time, I think it came to be accepted as correct by people across the political spectrum and played a significant role in Congress’ decision not to reauthorize the Independent Counsel statute,” Otis says.

“The opening of that opinion, which begins, ‘This case is about power,’ then goes on to say that cases like this often come as very small initial intrusions — coming, as it were, as a wolf in sheep's clothing. But then he goes on to say, in one of the best lines in judicial opinion, I think, 'But this wolf comes as a wolf.'"

Mary Anne Franks, a professor of law at the University of Miami, says Scalia was at his best when he was ruling on defendants' rights.

“Among the best: Scalia’s dissenting opinion in the 2000 case Dickerson V. The United States, which declined to allow Congress to overrule the Court’s famous Miranda decision,” she says. “However one feels about the importance or necessity of Miranda rights, the argument that they are required by the Constitution is shaky at best. Scalia ruthlessly pointed out how no less an authority than Chief Justice Rehnquist, the author of the majority opinion [in Dickerson V. The United States], had previously stated that Miranda rights were not constitutionally required.”

Franks says Scalia was at his worst when he was ruling on domestic violence protections, specifically in the 2005 case Castle Rock v. Gonzales.

“[It] shows the deeply unprincipled side of his much celebrated textualism,” she says. “Jessica Gonzales argued that her local police department violated her constitutional rights by failing to enforce the plain terms of the protective order she had against her estranged husband. The police ignored her repeated pleas for help after her husband abducted the couple's three children, who were later found dead in his truck.”

“Scalia maintained that the words ‘shall arrest’ in the protective order did not in fact mean ‘shall arrest’ — that the police were not obligated to act. This opinion was devastating for domestic violence victims, as it meant that protection orders — one of the only forms of legal protection that victims have against abusers — were quite literally not worth the paper they were printed on.”

In 1996, the court ruled on the no-women policy at the Virginia Military Institute. Michael McConnell, a former judge on the US Court of Appeals for the 10th Circuit and a current Stanford law professor, says United States v. Virginia is one of Scalia's best opinions. McConnell specifically points to this passage written by Scalia:

“Much of the Court’s opinion is devoted to deprecating the closed mindedness of our forebearers with regard to women’s education, and indeed with regard to the treatment of women in areas that have nothing to do with education.”

Scalia later continued: “So to counterbalance the Court's criticism of our ancestors, let me say a word in their praise: They left us free to change. The same cannot be said of this most illiberal Court, which has embarked on a course of inscribing one after another of the current preferences of the society (and in some cases only the counter majoritarian preferences of the society's law trained elite) into our basic law.”

“It pays very little attention to the text of the Free Exercise Clause of the First Amendment, and absolutely no attention to its history, and it plays fast and loose with the precedent,” McConnell says. “But that only goes to show that Justice Scalia had clear understandings of how to interpret the Constitution, [something] that we can hold up and say, on some of occasions, that we disagree with how he applied them. That’s certainly better than justices who have no clear approach to begin with, other than to tell us the result that they want to see. Justices who just have a result that they want to see are never wrong by their own opinions, so to be able to say that Justice Scalia got one wrong by his own lights is actually quite a compliment.”