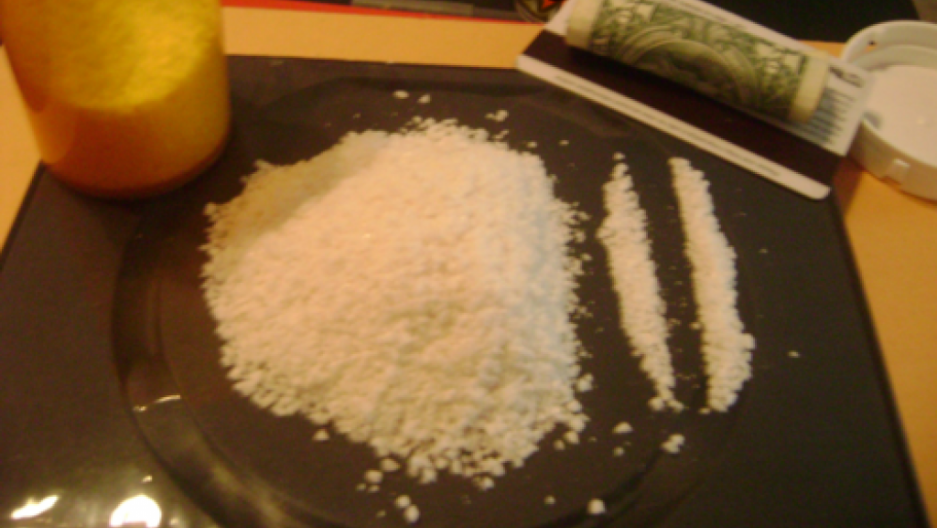 An image used to advertise the illegal stimulant “bath salts” on IndiaMart.

Basmati rice? Check. Pipe wrenches? Check. Human hair by the kilo? Check. And would you like to add 1,000 plastic combs for just $29? How about methamphetamine, ecstasy or LSD?

If someone will buy it, someone is likely selling it on IndiaMart. Though less prosperous than Amazon or China’s Alibaba, IndiaMart is the second-largest online wholesale marketplace on the planet in terms of the sheer number of products for sale.

It's one of India’s top tech success stories — a lively conduit plugging India into an increasingly borderless online sales economy worth trillions.

But IndiaMart’s vendors are advertising a range of illicit products that you won’t find on Amazon or Alibaba.

Think of almost every prescription-only upper or downer on the market. That includes Adderall, for a speedy high, and codeine syrup, a liquid opiate popularly mixed with Sprite. The designer drug “bath salts” is also on the menu. It’s advertised on IndiaMart with a photo of ready-to-snort white lines next to a rolled-up dollar bill.

“We don’t really have police trouble from this,” said a purported meth dealer who advertises on IndiaMart and goes by Daiichi.

“Look, I know this is a controlled substance,” he told GlobalPost by phone. “But we’re very discreet. We ship worldwide. We’re a verified seller and you can even confirm that with IndiaMart.”

IndiaMart is no online backwater. Its value has been estimated at around $146 million and its pending entry into the stock market is highly anticipated. When shoppers around the world want to buy in bulk from India — currently outpacing China as the world’s fastest-growing major economy — they often tap into that market via IndiaMart.

The company is so far fending off well-financed incursions from Amazon, Alibaba and Wal-Mart into India — and all three are vying for its top spot.

IndiaMart’s “brand ambassador” is actor Irrfan Khan, one of India’s most recognizable faces in Hollywood. (Hint: he’s the cop in “Slumdog Millionaire” and the park owner in “Jurassic World.”) His suave face is splayed across IndiaMart’s site.

But if you’re perusing for ecstasy dealers on IndiaMart, Khan’s image will pop up on your screen next to the automated text “Looking for ecstacy [sic] suppliers?” and “Send your buy requirement.” 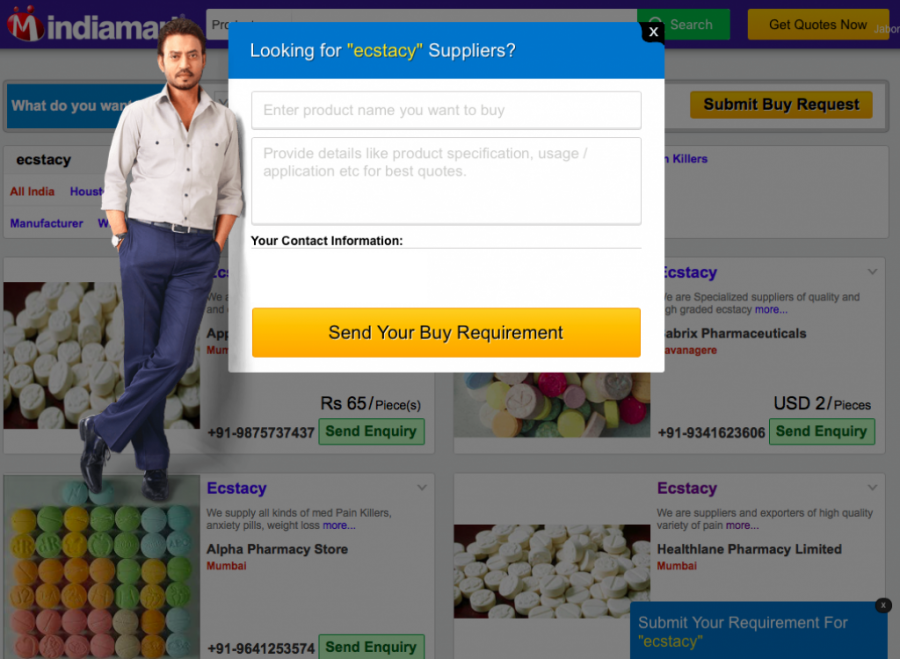 The image of actor Irrfan Khan, “brand ambassador” for IndiaMart, is seen guiding buyers to “ecstacy” in an automated pop-up window. The star’s photo is splayed over both legal and illegal products sold via the site.

Vendors offering restricted substances amount to a “very small percentage of our trade,” says Sumit Bedi, vice president of IndiaMart’s marketing department. “It’s at a very minor level for us.”

This is true. For the most part, IndiaMart is a vast pool of perfectly legal goods — from knitted onesies to carburetors to milk powder to saffron — of which illegal drugs take up a relatively small niche.

Yet Alibaba, its main competitor, appears almost entirely free of offers for illegal drugs. So do eBay and Amazon. Meanwhile, IndiaMart, despite a stated policy against posting illegal goods, hosts hundreds of vendors promising bulk shipments of controlled substances.

“I’m sure Alibaba would have faced this a few years earlier than us,” Bedi says. “This kind of trade has probably already happened in those marketplaces and they’ve learned from it already.”

IndiaMart’s efforts to block illegal drug sellers are “evolving,” Bedi says, and the company routinely consults with Indian police to obtain lists of illicit drugs and their street names.

“Typically, what you’ll see are slang names,” he says. “The problem with slang names is that neither the government nor marketplaces like us are able to figure them out.”

But the drugs offered on IndiaMart are hardly hidden behind a maze of impenetrable code. Want to shop for methamphetamine on IndiaMart? Simply type “meth” in the search bar and dozens of sellers are vying for your cash.

Looking for prescription-strength codeine syrup, a key ingredient in the “purple drank” glorified by American hip-hop? You can type in “promethazine,” the other drug in commonly abused cough syrup, or “Actavis,” the name of the pharmaceutical company associated with the best-known kind. Or you can search its street name: “lean syrup,” familiar to any 13-year-old with a Lil Wayne mixtape.

A significant portion of IndiaMart’s drug-pushing vendors display an on-screen seal that reads “verified supplier” — a feature used by sellers like Daiichi to gain customers’ confidence.

Yet the sole requirement asked of “verified suppliers” is a working email account. Once verified, drug sellers can then list products for free and find buyers willing to pay via Western Union or bank transfers.

Still, there are reasons to believe that IndiaMart is not the candy store for uppers and downers that it appears to be. It seems that many of its vendors offering meth and ecstasy are not drug dealers, but scam artists.

Unsurprisingly, drug dealers on IndiaMart generally post fake numbers and fake business locations. Most prefer to communicate by email in the choppy syntax of a Nigerian 419 scammer. They inevitably want cash up front.

Multiple sellers contacted by GlobalPost offered to ship ecstasy or meth to the United States. Yet some asked for payment to banks in Cameroon, notorious for online frauds. One requested transfers to Bank Pekao, Poland’s second-largest bank. Few were willing to speak on the phone.

“We only advertise our products in indiamart it does not concern them how or why we ship we need no permission from them,” wrote a self-proclaimed ecstasy vendor on IndiaMart who was contacted via email, typos and all. “Estacy is not legal evey country that is ehy we ship discreetly.”

“Typically, what you’ll see are slang names,” he says. “The problem with slang names is that neither the government nor marketplaces like us are able to figure them out.”

A request to meet a purported ecstasy seller in person was met with this response: “Visit can be arranged after first order ... we deal with many other research chemicals and illegal drugs so visit will be planned with time for secusrity reasons.”

Message boards popular among drug users are littered with rants against IndiaMart’s drug merchants. Their stories usually end one of two ways: the buyers either get stiffed or receive a baggie full of pills that produce not euphoria but rage, which settles in once they realize they’ve paid $300 for duds.

“We’re very discreet. We ship worldwide. We’re a verified seller and you can even confirm that with IndiaMart.”

For starters, the “cyber patrolling and surveillance cells” within India’s police are “majorly caring about national security,” not pharma scams, Choudhary says. And anyone dumb enough to file a police complaint against an online drug dealer, he says, faces imprisonment for soliciting narcotics.

Even though con artists and drug vendors inhabit a tiny, dark corner of the site, IndiaMart does have “a responsibility to the market” and will step up its efforts to weed out criminals, according to Bedi. “The more we learn about this,” he says, “the stronger our system will become.”

But for now, the site appears to offer a range of hard drugs typically confined to highly encrypted dark web marketplaces — even though the odds of actually receiving a gram of meth or a ziplock full of oxycodone via IndiaMart may be low.

Even Daiichi, the Indian meth seller, offers a word of caution to anyone trolling for speed on IndiaMart: “Stories like this [about pharma scammers] are very alarming, eh? You’d better be careful.”