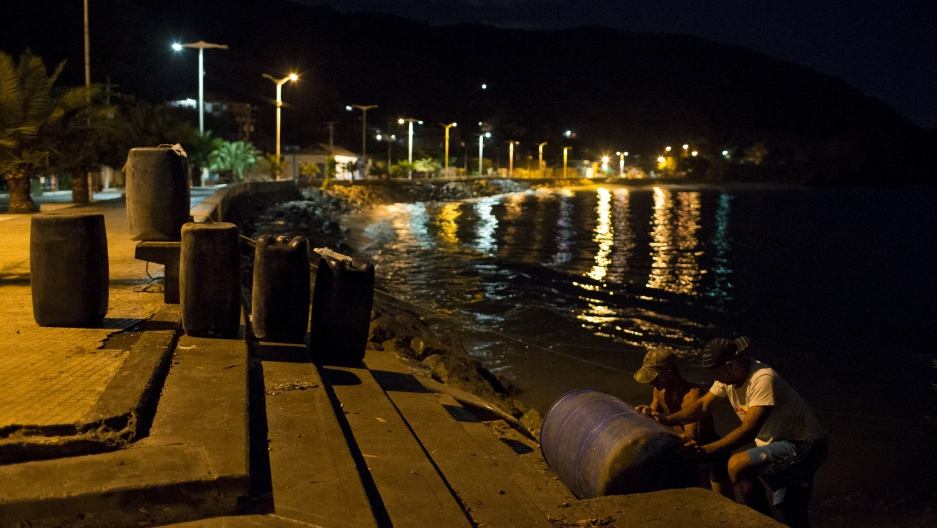 Men carry containers filled with gasoline in the bay of Rio Caribe, in the eastern state of Sucre, Venezuela, Oct. 30, 2015. Driven by a deepening economic crisis, smuggling across Venezuela's land and maritime borders — as well as illicit domestic trading — has accelerated to unprecedented levels and is transforming society.
Credit: Carlos Garcia Rawlins
Share

LIMA, Peru — With Venezuela accelerating into an economic nosedive, President Nicolas Maduro has just unveiled a package of drastic measures — or at least that’s the way he’s portraying them.

They include a 37 percent devaluation of the country’s besieged principal fixed exchange rate, while replacing the other rates with a single, floating exchange system.

But the most eye-catching is a staggering 6,000 percent hike in the price of gasoline in the oil-rich but deeply troubled South American nation.

Maduro broke the news during a rambling four-hour speech on national television on Wednesday evening, during which he swore several times and warned that the opposition wanted to use the move to further their “campaign of violence” against his self-styled “Bolivarian” socialist administration.

Yet although the increase in gas prices sounds mind-boggling, in practice it may make little or no difference.

According to OPEC, Venezuela has the largest oil reserves in the world, greater even than Saudi Arabia’s.

That has allowed it to heavily subsidize domestic pump prices — to the point where Caracas has effectively been gifting gasoline to its citizens since long before Maduro’s political mentor, the late leftist army commander Hugo Chavez, won the presidency in 1999.

It has been so cheap that it would have cost Venezuelans more to fill their car tanks with water than fuel. Motorists often ended up tipping the pump attendant more than they ever paid for gas.

With the price hike, gas will now jump from 0.1 bolivars per liter to six bolivars, or in dollars, from just under 4 US cents per gallon to $2.27.

But that’s at the new official fixed exchange rate of 10 bolivars to the dollar, which most Venezuelans simply can’t access.

Instead, they are stuck with the black market rate of around 1,000 bolivars to the greenback, meaning that even with the price hike, real Venezuelan pump prices are still just under 3 US cents per gallon.

Or to put it another way, gasoline in Venezuela remains ridiculously cheap and still easily the most affordable in the world.

“It sounds like a brutal price rise but it doesn’t actually mean anything. This isn’t going to change how Venezuelans think about gas or mean that they even start including it in their weekly household budget,” Raul Stolk, a Venezuelan lawyer who contributes to the independent blog Caracas Chronicles, told GlobalPost.

Harold Trinkunas, a Venezuela expert at the Brookings Institution, a bipartisan think-tank in Washington DC, added: “These steps are so small that they are not likely to have a meaningful impact on solving the government’s issues.”

So why take them?

“The government is caught between the economic and political realities of the situation,” Trinkunas said. “They may now at least have the [hardline Chavista] ideologues on board, and may just be testing the waters for further reforms down the road.”

The problems on Maduro’s plate seem insurmountable — and any real solution is going to require some serious economic pain from the country’s long suffering 30 million citizens.

Inflation will hit 720 percent this year, according to the IMF. There are shortages of all kinds of vital goods, from bread and toilet paper to contraceptives and cancer medicines.

And the country’s violent crime wave is so out of control that it has the world’s second-highest homicide rate; the capital, Caracas, has been calculated to be the world’s most murderous city.

More from GlobalPost: Venezuela's capital ranks as the world's most murderous city

To top it all off, the government’s bungling and secrecy means that Venezuela may actually be suffering a more intense Zika outbreak than even Brazil.

Maduro’s administration, meanwhile, has been responding with repression to anyone who questions the disaster.

The president has already said he will refuse to sign a law passed by the opposition-dominated national assembly to release political prisoners. And Venezuela’s highest court — which critics describe as a lapdog of the executive — also recently overturned a vote by the assembly to reject Maduro’s demand for decree powers to tackle the economic collapse.