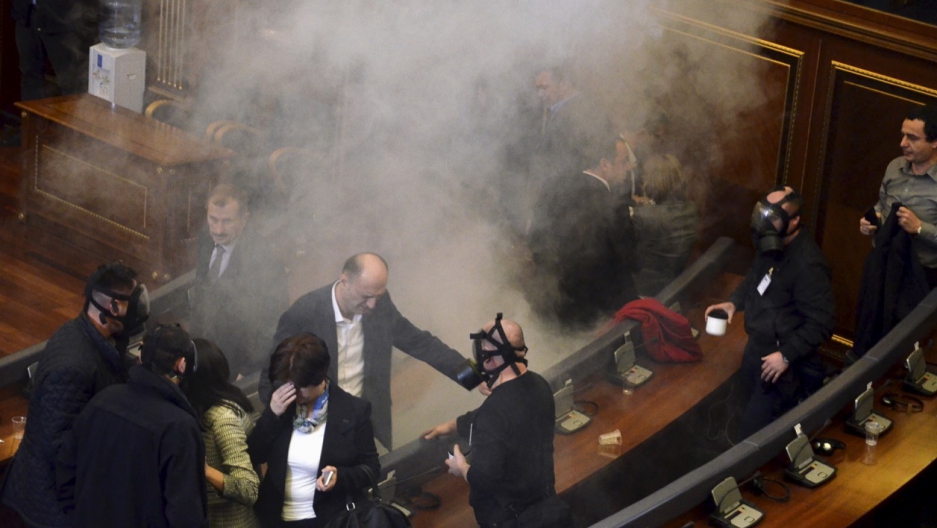 Update: Kosovo's government is buying a body scanner to catch politicians trying to smuggle tear gas canisters into parliament, because that is a thing they actually do.

In most European parliaments, a spirited argument and a few jeers are usually enough to get your point across. But not in Kosovo, where lawmakers prefer the added value of launching tear gas.

For months, that’s been the favored tactic for the country’s political opposition, which is angry with the ruling government and regularly uses tear gas and other projectiles to show it.

This year’s opening legislative session was interrupted on Friday when disgruntled lawmakers fired gas-filled canisters not once, not twice — but three times.

Kosovo’s international backers have called for an end to the violence — street fights between anti-government protesters and police outside parliament have also occurred — but opposition leaders say it’s the best way to turn attention to their cause.

“I think the majority of people will understand that there must be some terrible hardship for this country, there must be some great danger, if these [lawmakers] are forced to do such actions,” Albin Kurti, a parliamentarian who has led the protests, told Agence France-Presse last week.

He’s referring to what government critics say is the lack of political and economic progress the Balkan nation of around 1.8 million — and Europe’s newest country — has made since it declared independence from Serbia, its neighboring nemesis, in 2008.

Since late last year, Kosovo has been rocked by a protest movement whose supporters say corruption is rife and believe the government’s deal with Serbia, which gives ethnic Serbs in Kosovo more rights, will stoke tensions with the ethnic Albanian majority.

The two countries fought a brief war in the late 1990s, and while patching up ties with Serbia has been one of Kosovo’s top priorities, anti-government demonstrators say they’ve gotten nothing out of it.

If you’re a Kosovar, you might be forgiven for being pretty angry: While Serbia is moving toward European Union membership, Kosovo is stuck with an unemployment rate around 30 percent and one of the lowest GDPs-per-capita in Europe, according to the World Bank.

It’s also eyeing eventual EU membership, but that probably won’t happen for quite a while, since not all of the EU countries even recognize Kosovo’s independence.

That’s why cutting deals with the unfriendly neighbor — who has even fought Kosovo’s failed bid for UNESCO membership — will inevitably stir some passion.

Whatever the grievances, though, launching tear gas in parliament may not be the best way to get your message across.

Then again, Kosovo’s parliament isn’t the only rowdy legislature in Europe. Here’s looking at you, Ukraine.