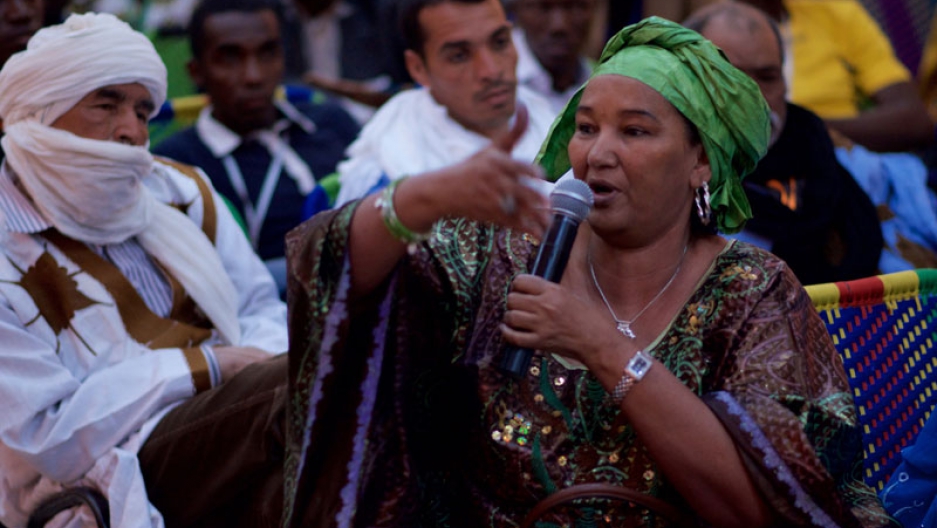 How to live together in peace is the key question Malians face. And the Festival Sur le Niger in Segou, amid all its music, theater performances and art expositions, hosted a discussion to address it.

Editor’s note: This is a review of Afropop Worldwide producers Sean Barlow and Banning Eyre’s impressions of Mali’s traditional music scene amid the country’s recovery from crisis.

We feared the talk would be a succession of well-intentioned platitudes, so we were pleased instead to hear a passionate airing of diverse views from a room full of engaged participants, lots of them affiliated with music festivals.

Festival in the Desert director Manny Ansar voiced his impatience at having to constantly prove that, as a Tuareg, he was not a rebel or an extremist.

Taragalte Festival director Halim Sbai cast Mali’s problems in the larger context of the Sahara Desert, in particular focusing on the lucrative cocaine trafficking that has enormously complicated peace prospects in recent years.

And Niger Festival director Mamou Daffe pledged his festival’s determination to sustain the struggle for peace through culture.

But citizens and artists like Fadimata Wallet Oumar of the group Tartit also stepped in, telling personal stories.

She recounted her experience of twice being driven into refugee camps due to conflicts she clearly felt could have been avoided.

A prominent theme was the feeling that the north of Mali has been systematically neglected throughout the country’s history, and that it lags behind the rest of the country in terms of development.

There is a kind of automatic response to this, something like: You’re not alone; there are neglected areas throughout the country.

No doubt this is true. But the woes of the desert north are dismissed too easily this way.

Regardless, for all the strong emotions aired, the discussion was just that: a respectful back-and-forth, edged with deep frustrations but never disrespectful or bellicose.