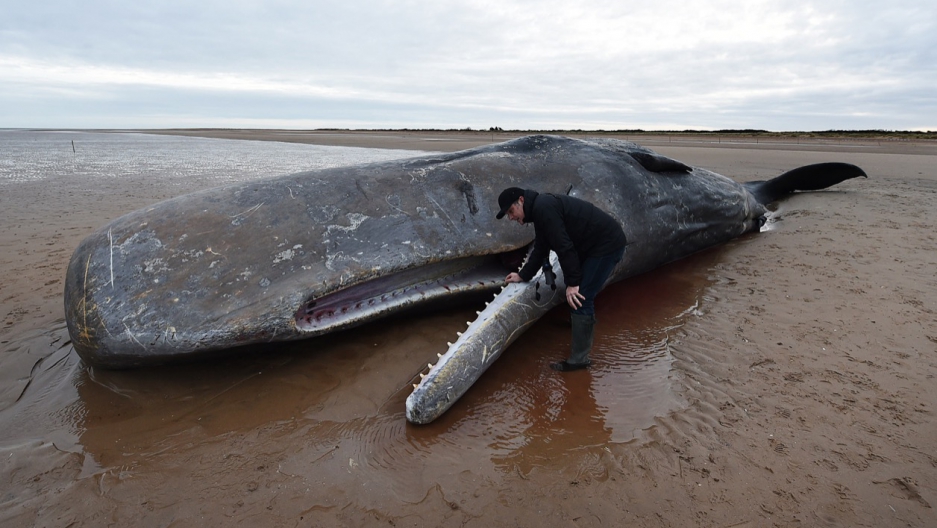 From January to early February, 30 of the magnificent creatures died on the coasts of the UK, Germany, the Netherlands and northern France, all “bachelor” or juvenile males.

For now the stranding appears to have ceased, yet scientists are hardly any clearer on what caused so many of the huge whales to be grounded in shallow North Sea waters. They were far from their usual hunting habitat in the deep north Atlantic Ocean, where they can plunge more than 6,500 feet preying on squid.

“It will be difficult to fully reconstruct why this group ended up in the southern North Sea,” Anja Reckendorf, a veterinary scientist with the University of Hannover, told GlobalPost. “We know very little about the journey that males make when they leave their natal group, which also makes the reconstruction of what went wrong very difficult for us.” 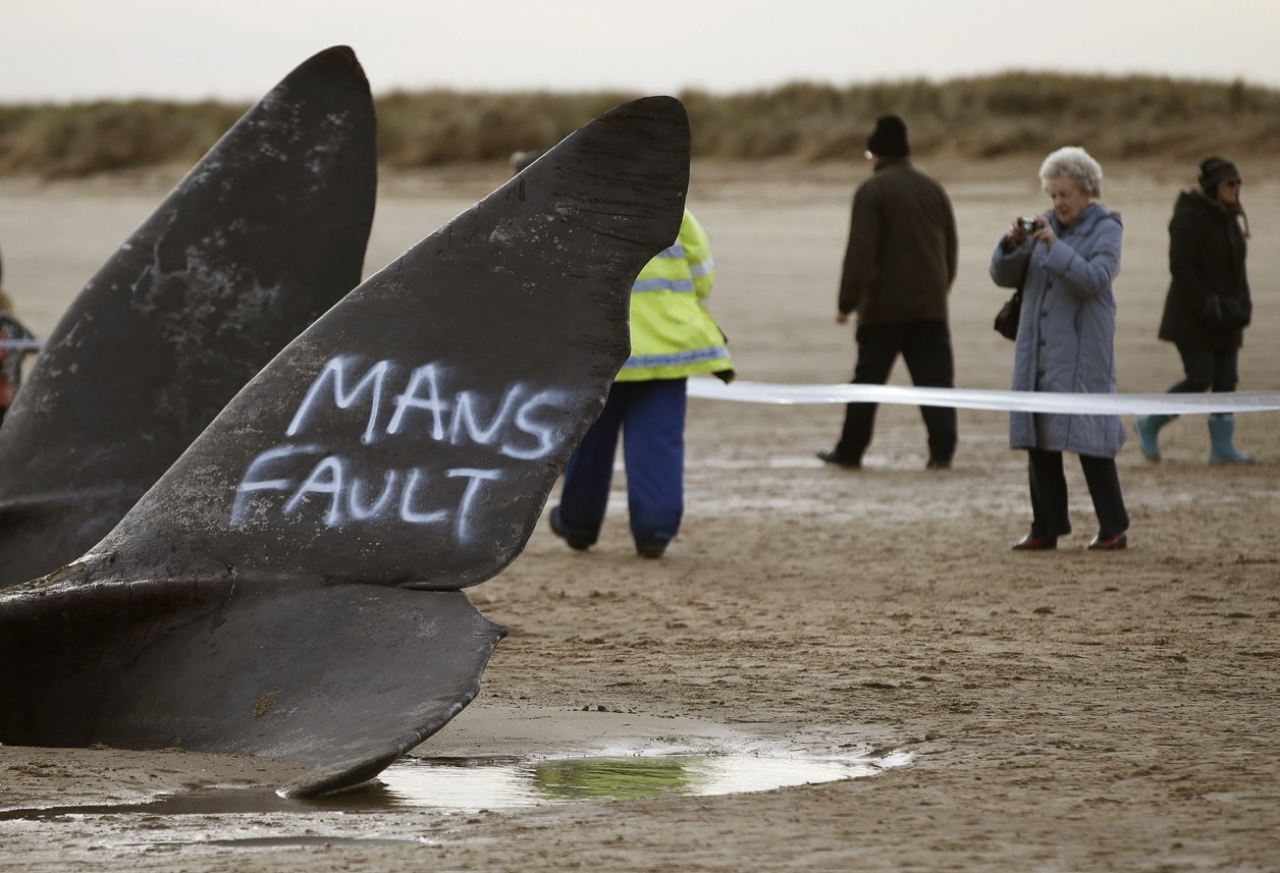 Two sperm whales lie on the sand after being washed ashore at Skegness beach in Skegness, Britain Jan. 25. Someone took the opportunity to leave graffiti messages on the creatures.

Many theories have been posited in the media, from squid hunting to solar flares. Early results from necropsies (whale post-mortems) conducted on some of the whales have revealed some details, such as plastic fish netting being found in the stomach.

Nicola Hodgins, the head of science and research with the Whale and Dolphin Conservation Center, believes such speculation and thirst for answers can be pointless.

“It is all just speculation. There could be numerous reasons.”

“Until we get clear results from the autopsies being carried out, it is all just speculation,” she told GlobalPost. “The reality is that there could be numerous reasons these whales ended up where they did.”

Weighing 35 to 45 tons, the whales are an awe-inspiring sight. Yet beyond the large crowds and strange selfies being taken, seeing the beached creatures dying can also be a harrowing experience. Once on land they are hard to move and euthanizing them is not easy. Many of the North Sea whales were removed to a landfill to avoid the carcasses becoming toxic.

Beached whales are far from a rare sight. Scientists and officials have recorded mass strandings of sperm whales before in the North Sea. In 1996, 27 were found. 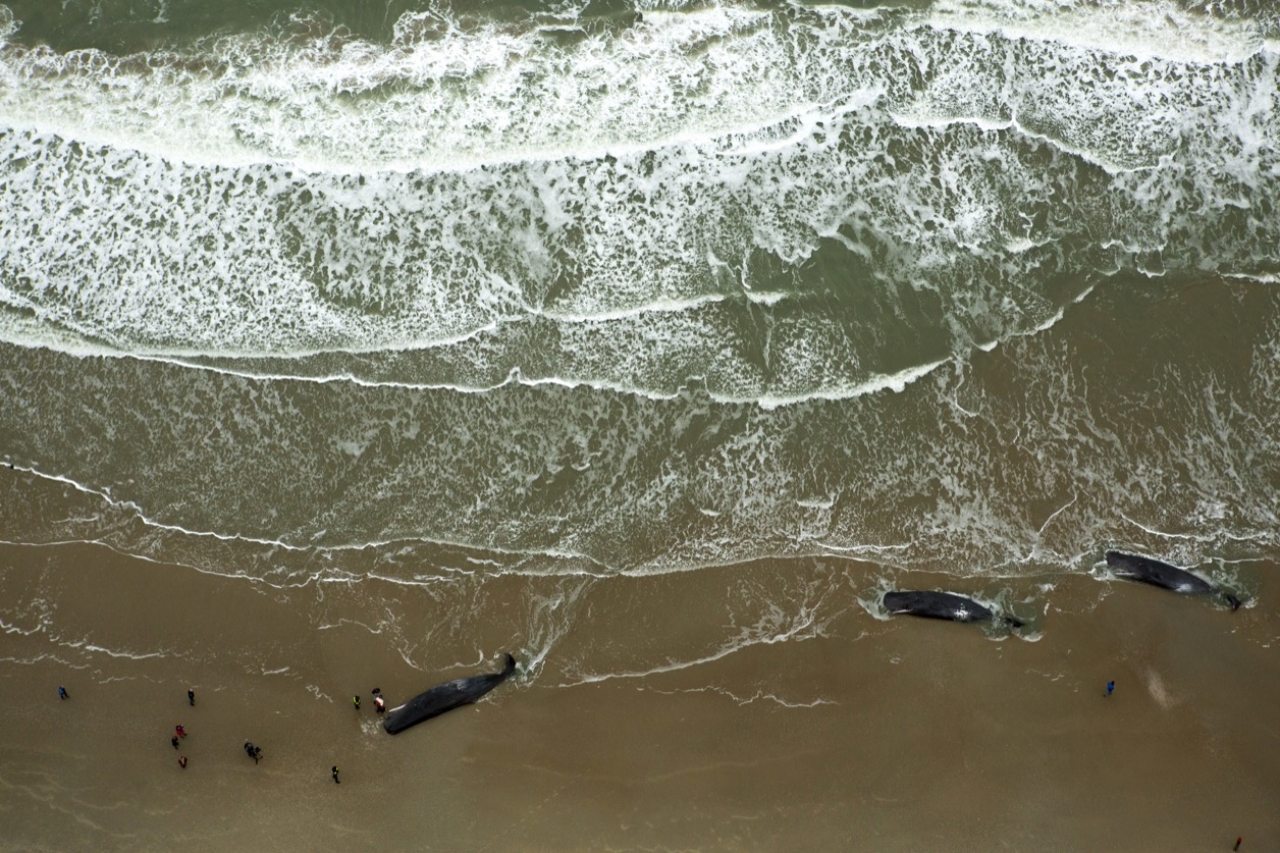 Dead sperm whales on a beach on Texel Island, The Netherlands, on Jan. 13.

Nevertheless, the recent spate is the largest such recorded event of its kind for Germany and the UK in terms of numbers. With a global population estimated to be in excess of 200,000 individuals, there is little reason to be concerned for the immediate status of the species.

For scientists and whale experts, however, it is often hard to gauge the real impact as they come late to the game — only seeing the whales once they’re on the beach. Whereas monitoring the great creatures is relatively easy in coastal areas around, say, Mexico or India, it is a far different proposition tracking them in the deep Atlantic.

“They are deep-diving whales who hunt squid at depths around 1,000-1,500 meters [about 3,300-5,000 feet] … They also do this during the cold winter months, when light is scarce in the north, the ocean is rough and weather conditions can be challenging,” Reckendorf said.

One thing is certain: Large numbers of whales beaching at the same time is very likely to occur again in the coming decades. It is the frequency of such events that may help inform experts on the deeper effects the climate and humans may be having.

“I guess one thing we can learn is that human behavior does have an impact,” Hodgins said. “It also shows we know very little about some of the animals we share the planet with.”