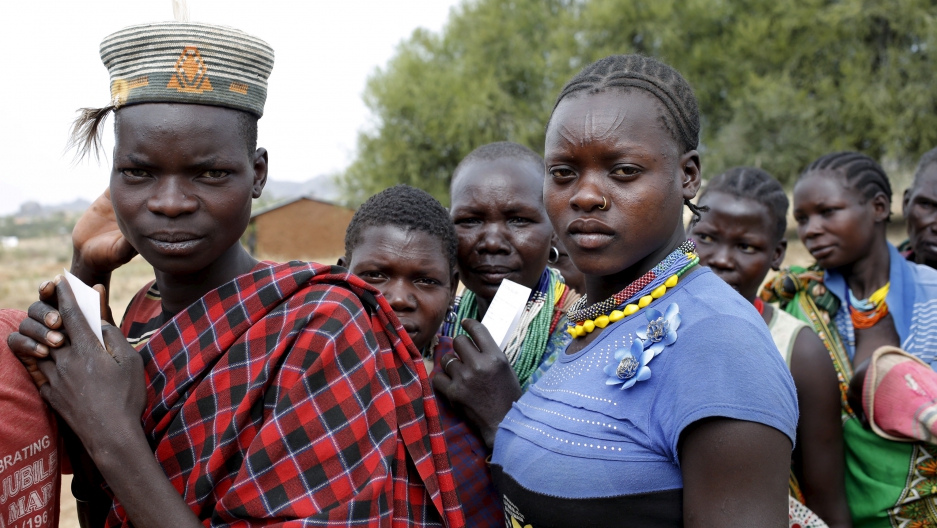 People from the Karamojong tribe wait in line to vote at a polling station during presidential elections in a village near the town of Kaabong, Uganda, February 18, 2016. Ugandans start casting votes Thursday to decide whether to give Yoweri Museveni, in power for three decades, another term in office.
Credit: Goran Tomasevic
Share

It's an astonishing figure, one that speaks to the East African country’s youthful demographics — and the reluctance of Museveni to give up the presidency.

He seized power 30 years ago as a rebel leader, following the brutal reigns of Idi Amin and Milton Obote. In 2005, Museveni changed the constitution, abolishing a two-term limit. Now he is seeking his fifth elected term in office.

On Thursday, voters waited in long lines at polling stations to cast their ballots, despite hours-long delays under the hot sun. Uganda's electoral commission has blamed the wait on the slow delivery of electoral materials.

Many Ugandans also complained of a shutdown of social media including WhatsApp, Twitter and Facebook, which Museveni said was because people "misuse them, telling lies."

While this is a competitive election, Museveni has a strong advantage as the incumbent, including favorable media coverage and support from security forces.

An opinion poll conducted earlier this month by Ipsos showed Museveni ahead of his main challenger Kizza Besigye, 53 percent to 28 percent.

Besigye, from the Forum for Democratic Change party — and Museveni’s former physician — has been harassed repeatedly and arrested by police. He was even detained on election day, according to local media, after complaining about alleged vote rigging.

Former Prime Minister Amama Mbabazi, another of Museveni’s former allies, is also running for president, amid concerns that the opposition vote has been split.

Opposition candidates have accused Museveni of corruption, and criticized his economic policies.

But for the “Museveni babies,” as those born after the president took power in 1986 are known, unemployment and poor quality of basic public services are key issues.

According to the World Bank, 64 percent of Uganda's working-age population under 24 are unemployed. The African Development Bank puts the figure at 83 percent.

Nonetheless, Museveni — who is known for his folksy turns of phrase — and his National Resistance Movement maintain a strong support base among the country's poorly educated, rural majority.

Some 16 million people in Uganda are registered to vote. More than 50 percent of the vote is required for an outright win in the presidential race, to avoid a run-off with the second-ranked candidate.

The Committee to Protect Journalists reported worsening harassment and intimidation of journalists in the lead-up to the elections. In one such case, police arrested the host of a talk show on private radio while he was mid-broadcast.

According to the African Centre for Media Excellence, which runs training programs for journalists, the public Uganda Broadcasting Corporation is required by law to provide balanced coverage of the candidates — but had allotted 79 percent of its airtime in December to Museveni.

Museveni, in an attempt to justify seeking a fifth term in office, has said that it is not the right time for him to step down.

“This old man who has saved the country, how do you want him to go?” he told a campaign rally last month. “How can I go out of a banana plantation I have planted that has started bearing fruits?”

Many believe that Museveni's son and head of the elite Special Forces Command, 41-year-old Muhoozi Kainerugaba, is being groomed for succession.

"If I lose [the] election I shall leave power," Museveni said in November. "I have got my job at home, I am a cattle keeper."