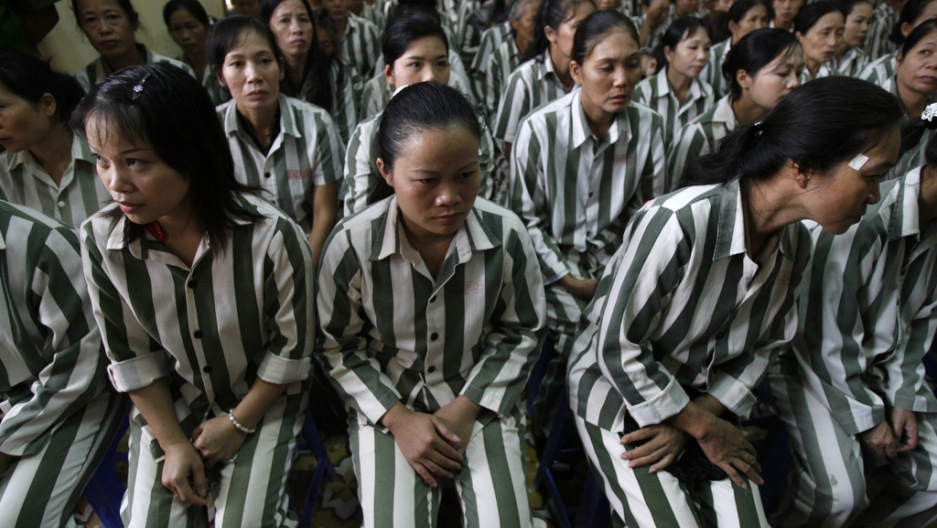 Inmates wait before they are released from Thanh Xuan prison outside Hanoi on Aug. 29, 2010.

A convicted drug trafficker in Vietnam looks set to avoid the death penalty after becoming pregnant in prison.

Nguyen Thi Hue, 42, is being held in a jail in the northeastern province of Quang Ninh, which borders southern China, after being sentenced to death for drug trafficking offenses in 2014.

Vietnamese newspaper Thanh Nien News reported Hue paid a 27-year-old male inmate at the jail 50 million Vietnamese dong, or roughly $2,300, to supply her with his semen and syringes. She then successfully impregnated herself.

Four prison guards have been suspended over the incident, the BBC reported. Hue is due to give birth in April.

Under Vietnamese law a pregnant woman or a mother with a young child cannot be executed, which means Hue’s death sentence is likely to be reduced to life imprisonment.

There were no details about Hue's crimes, but illicit drugs are considered a “social evil” in Vietnam and drug offenses carry harsh penalties. Anyone caught in possession of more than 20 ounces of heroin or 44 pounds of opium can end up on death row.

Death-row prisoners used to be executed by firing squad, but Vietnam passed a law in 2010 that replaced the firing squad with lethal injections. The first execution using drugs instead of bullets was carried out in 2013.

This isn't the first time a woman on death row has become pregnant. Two prison guards in the northern province of Hoa Binh were jailed in 2007 after a female inmate under their watch recruited a male inmate to help her successfully avoid the firing squad.