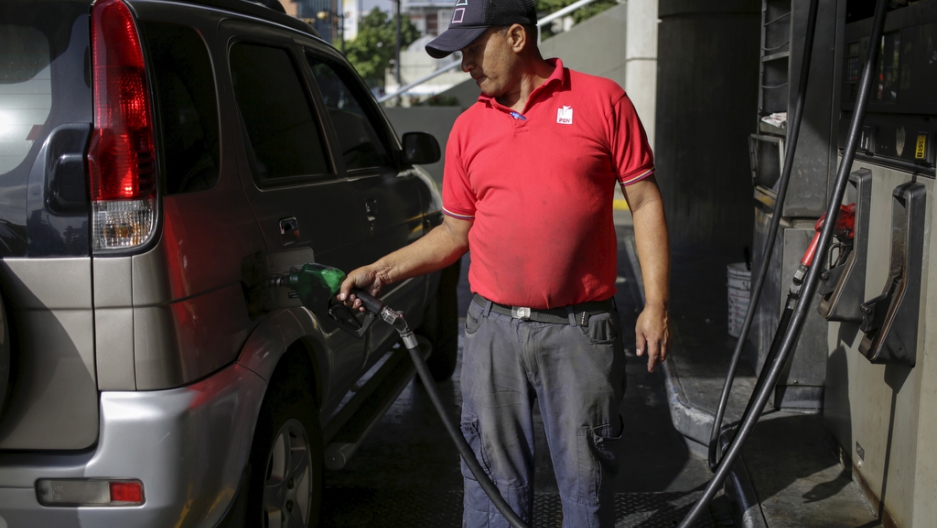 A worker pumps gas into a vehicle at a gas station, which belongs to Venezuela's state oil company PDVSA, in Caracas, on Feb. 12, 2016.
Credit: Marco Bello
Share

Already dealing with triple-digit inflation, Venezuelans have just been hit with about a 6,000 percent hike in gasoline prices and a 37 percent currency devaluation. Venezuelans will still pay next to nothing for gas, but the move highlights just how badly the country has been hit by a collapse in global oil prices.

President Nicolas Maduro announced the latest measures to prop up the failing economy during a four-hour televised address on Wednesday, reassuring viewers — if they were still listening — that the price of gasoline was “almost nothing."

Such comments are unlikely to go down well with ordinary Venezuelans who are used to almost free gasoline and are currently struggling to pay for cooking oil and toilet paper as a widespread scarcity of basic goods fuels inflation and eats up their salaries. Inflation hit 275 percent last year and is expected to reach 720 percent this year.

"This is a necessary action, for which I take responsibility," Maduro said, apparently anticipating a negative response from the public to the first increase in gasoline prices in 20 years.

Given Maduro is already fighting for his political survival, it might seem crazy of him to meddle with such a sensitive issue as the cost of gas.

The fact that he's going there is a testament to the how bad the global oil market has become.

The US shale boom, China's economic slowdown and a stronger dollar have contributed to a global glut of oil. That's pushed prices below $30 a barrel to the lowest level since 2003 and weakened the economies of oil-dependent countries such as Venezuela, Russia, Nigeria and Mexico.

Now that Iranian oil exports are growing, following the lifting of international sanctions last month, and Iraq is cranking up output, there are fears that the continued oversupply could worsen and push prices as low as $10, even as oil-rich nations look to freeze production and stabilize prices.

The oil crisis has put serious strain on Venezuela's finances. Crude is the main source of export revenue for the Latin American country, which has the world’s largest oil reserves. The 70 percent drop in oil prices since mid-2014 has deprived Maduro’s government of the funds it needs to pay for imports, fund social programs and service its debts.

Even though Venezuelans will still enjoy the cheapest gasoline in the world, Maduro has good reason to be worried about how the public responds to the price hike. When the government increased prices in 1989 Venezuelans took to the streets in nationwide protests that resulted in hundreds of deaths.

Venezuela's deepening economic crisis has eroded Maduro's popularity and asking Venezuelans to pay more than almost nothing for fuel won't improve his image — or improve the economic situation.

The gasoline price hike is expected to save the cash-strapped government $800 million a year in subsidies, the BBC reported. It’s also hoped the currency devaluation will boost demand for Venezuelan exports by making them cheaper for foreign buyers.

"The time has come to establish a system that guarantees access to hydrocarbons at a fair price but that also guarantees the funding of investment in producing that gasoline," Maduro said.

But analysts say the measures fall well short of what is needed to revamp the economy, which has been severely weakened by years of mismanagement and is now being pushed to the brink of collapse by plunging oil prices. The economy shrank by 5.7 percent in 2015.

Venezuela's decision this week to join fellow OPEC members Saudi Arabia and Qatar as well as non-OPEC member Russia in calling for a production freeze to halt the fall in prices underscores the growing concern in Caracas.

Capping output probably won't do much to lift oil prices, and it certainly won't be enough to save the Venezuelan economy.