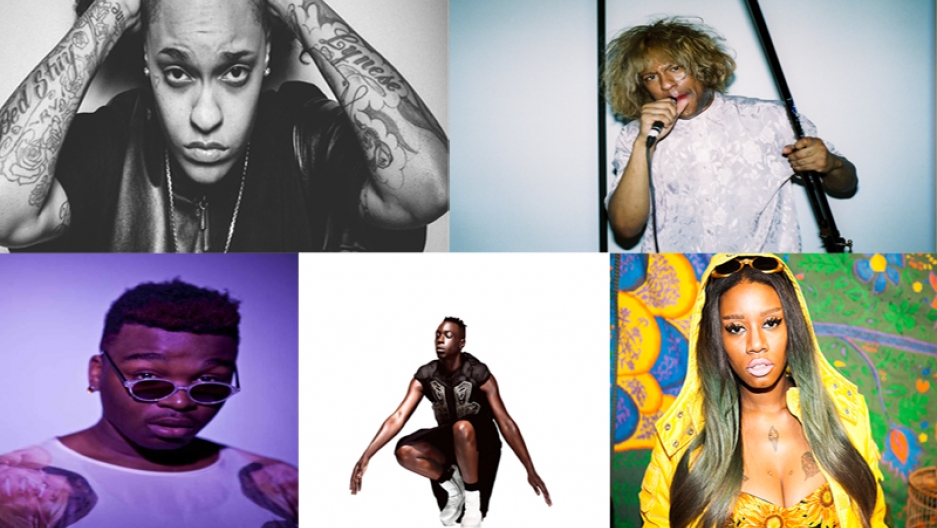 There's a chance you may still be reeling from Beyonc's latest video.If you are:it's ok, I am too. And perhaps after watching "Formation" you were curious aboutthe other voices in the video. They belonged to New Orleans rappers Big Freediaand the late Messy Mya.

If you're nowwondering how you've missed these great queer hip-hop artists, there are a couple of reasons. First, queerphobia still persists in hip-hop culture, as the recent Twitter feudbetween rappers Kanye West and Wiz Khalifa showed. Secondly, it's probably because their talents are often overshadowed by their queerness. As Eric Shorey wrote in Pitchfork, "'Of course there is some benefit to emerging, queer artists who are discovered because of their association [with other queer artists], but the problem is that certain kinds of classifications absolutely work towards further marginalizing the artists, and relegate them to a kind of subaltern obscurity." Despite all this, there are plenty of amazing LGBTQ rappers spitting fire, and they've each created bodies of work that are vastly different from one another, and just as inventive and complex --- if not more so --- than some of their mainstream contemporaries.

So, while you patiently wait for the return of Frank Ocean (was he even real?!), here are five other LGBTQ rappers (in no particular order) that you should be listening to:

You might recognize her from her days as a backup dancer for Lil Mama, or from her appearances in music videos like Beyonc's "Party," but the Queens rapper Dai Burger's been making her own music since 2010. Her flow is brash, raunchy, and hilarious. Start with "Souffl," the banger "Big Boob B*tch," or "My Lil Dance."

Le1f (pronounced "leaf") started his career as a producer for rap groups like Das Racist. He began releasing mixtapes in 2012. His first music video for "Wut" is a playful, anime-inspired (peep the Pikachu masks) dance party.

Le1f released his debut album, "Riot Boi," late last year. "Riot Boi" is his most politically charged work yet, with references to racism in the gay community, trans rights, and the Black Lives Matter movement on tracks like "Tell," "Change," and "Taxi." Le1f just announced a tour, and you can find dates here.

Originally from the Bay Area, Siya's an openly lesbian rapper and a cast member of the Oxygen reality show "Sisterhood of Hip-Hop." She may be best known for her collaborations with R&B singer Tank, but she can hold her own as well. Start with her 2012 single, "D.Y.K.E.," and check outher recent remix of Rihanna's "Work" with Kay Cola.

Last year, Mykki Blanco announced on Facebook that he'd be retiring from music to pursue a career in investigative journalism. The rapper, who got his start as a performance artist and writer, began releasing music in 2012. But thankfully, he's back in the game with the formation of his label, Dogfood Music Group, and the recently released track "Scales." Other great songs include "Wavvy," "Kingpinning," and "The Initiation."

When I first heard Cakes' 2013 track "Goodie Goodies," I had to pick my jaw up off of the floor afterward. His flow is just like Lil' Kim's, whom Cakes (born Rashad Bradshaw) considers one of his biggest inspirations. Cakes began rapping in high school for fun, but we should all be very glad that he's pursuing a rap career. Since then, he's released several other mixtapes and EPs. His latest release, 2015's "#IMF," is a conceptual, electronic-influenced EP exploring a love story from start to finish.

Got any other favoritequeer rappers to recommend? Let us know in the comments!