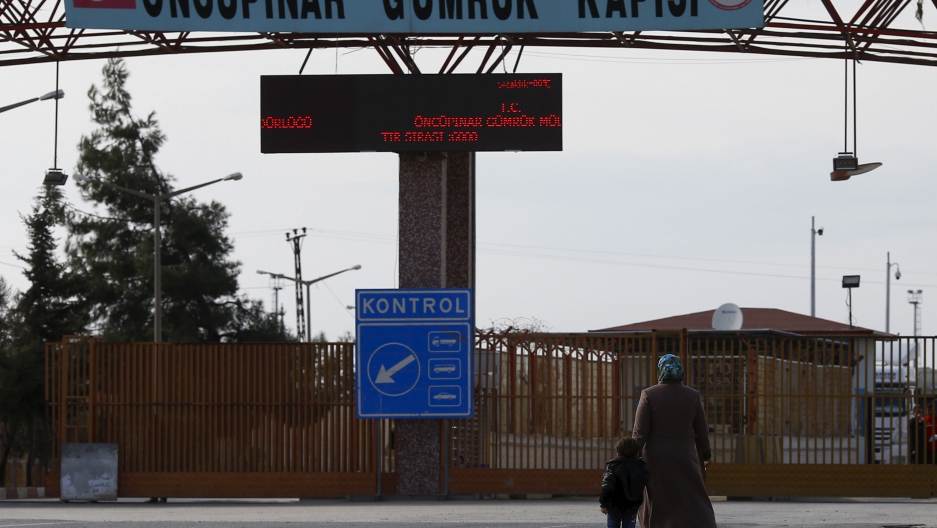 Syrians walk at the Oncupinar crossing on the border with Syria in the southeastern city of Kilis, Turkey on Feb. 10.
Credit: Osman Orsal
Share

KILIS, Turkey — The town of Kilis, a busy little place just a few miles from the Syrian border, is where many refugees fleeing the horror of war are first able to breathe a sigh of relief.

In the courtyards of its cafes and restaurants, they drink tea without fear of bombs raining down. In the shops, they buy cell phones to use to call relatives and plan their next steps.

For most, it is a stop on a longer journey: farther into Turkey or beyond, to Europe. But for more than 100,000 Syrians, it's the final destination — or at least the place where they will wait out the war.

“The people in this town have been good to us Syrians,” says Maher, a businessman who has lived in Kilis for the past two years. “Many of them have helped me in the past.”

Syrians outnumber Turkish people in Kilis. Around 120,000 have settled in the town and surrounding area, 35,000 of them in camps. One of those camps hosts some 15,000 refugees. It has a school, health care facilities and well-built container shelters. A Syrian boy looks through a gate as others wait to cross into Syria at the Oncupinar border crossing in Kilis, Turkey, Feb. 11, 2016.

Those kind of numbers could easily wear on a local population. Indeed, in many towns in Turkey and Lebanon, refugees are seen as a burden. But here, the locals have remained strikingly charitable.

It's enough to motivate the deputy head of Turkey’s ruling Justice and Development Party (AKP), Ayhan Sefer Ustun, to nominate the people of Kilis for the Nobel Peace Prize. (The Greek island of Lesbos was nominated for the same reason a few weeks earlier.)

"People share their jobs, houses, trades and social spaces [with Syrian refugees]. I suppose that such an example of an act of mass peace does not exist in the world,” he wrote in his letter to the Nobel committee.

But how do the residents of this town, which has changed so dramatically in character since the beginning of the war, really feel about their new neighbors?

“There is no difference between us,” says Halil, the owner of a cafe frequented by Syrians. “We serve them here like everyone else and some of them work for us.”

Standing next to him, a young Syrian boy holds a tray of tea. He’s one of the few Syrians on staff here.

“I like it here. People are good. No one bothers me,” he says, before darting off to serve more customers.

One of the reasons refugees have been given a generous reception may be because they have helped fuel the local economy. Most business owners in Kilis have benefited from the influx of people and money. But even those who haven’t are largely supportive of the refugee community.

In the early days of the uprising against Syrian President Bashar al-Assad, Kilis was a quieter place. The refugee crisis had yet to fully take hold. Kilis was better known for being the last stop for foreign fighters going into Syria without too much difficulty. Journalists and young men of fighting age would cross paths in the same hotels before heading toward what was then a porous border. When the war next door intensified and more refugees began to flood over the border, aid workers followed. The town grew again.

Today, the streets bustle. On the main road that runs through the town, Syrians buy from Syrian-owned shops and stalls and eat in Syrian cafes. Children work in the streets, shining shoes and selling food. The atmosphere has changed. And it’s hard to find many people who will talk ill of the Syrians in their town.

Internally displaced Syrians gather at a shelter near the Bab al-Salam crossing, bordering Turkey's Kilis province, on the outskirts of the northern border town of Azaz, Syria, Feb. 6, 2016.

Bushra, a teacher who works in a school for Syrian and Turkish children, said there is an understanding here about what is happening to the Syrian people.

But that kind of tolerance could soon be stretched to its limit. Some 50,000 Syrians have amassed on other side of the border, close to Kilis, fleeing a fierce, Russian-backed government offensive on the city of Aleppo and the surrounding countryside.

Turkish President Recep Tayyip Erdogan has said he would let them in “if necessary,” but warned of the prospect of an even greater crisis.

"There is a chance the new wave of refugees will reach 600,000 if airstrikes continue. We are making preparations for it," he said in a speech to a business forum in Ankara on Thursday.

There are a few in Kilis who don’t like the idea of admitting more refugees. It’s the younger generation, those who are looking for their first jobs.

“It’s not good for the Turkish people for more people to come,” says a high school student who does not wish to be named. “Look at these women over here,” he says, pointing across the road, “every day they beg for money. It’s too crowded here.”

The burden of the Syrian refugee crisis has weighed on Turkey more than any other country. It has taken in more than 2.5 million Syrians and spent billions of dollars building refugee camps and providing care.

The crisis has become a sore point in relations with the European Union in recent days, as the bloc has pressured Ankara to seal Turkey's borders to Europe, while at the same time opening its borders with Syria. The EU has promised 3 billion euros ($3.3 billion) to help Turkey deal with the crisis, but Turkish officials suggest the country is reaching its capacity, and have accused the EU of hypocrisy and self-interest.

“We’re surprised that the Europeans should say we should open the borders to Syrians from Aleppo when we’ve been doing that for five years,” Selim Yenel, Turkey’s ambassador to the EU, told the Guardian. “It is all unfolding, another tsunami. How are we going to cope?”

In his speech on Thursday, Erdogan reacted angrily to the pressure, threatening to send refugees to Europe unless more was done to share the burden.

"We do not have the word 'idiot' written on our foreheads. We will be patient but we will do what we have to. Don't think that the planes and the buses are there for nothing," he said.

Maher, the Syrian businessman, is sensitive to the possibility that the hospitality of Kilis residents, and Turkey as a whole, may not last forever.

“When the war started, they were so good. But now the war has been going on for so long, they are not as patient,” he says.

Back on the busy main street, Mustafa, an elderly food stall owner, will hear none of it.

“There is no problem here, no problem at all. Look around you, there are Syrians everywhere. They are our brothers,” he says.

“Let them in! We will put them on our heads if we have to.”

Editor's note: Several sources in this story would only speak on the condition that their full names not be used.