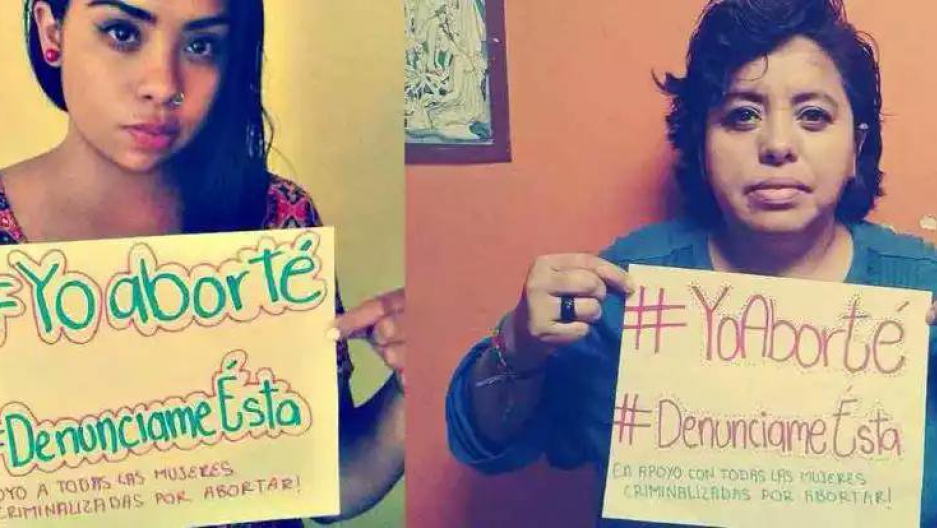 In 2015, women in Mexico took part in a pro-choice social media campaign, posting photos of themselves holding cards reading #YoAborté ("I aborted") or #DenunciameEsta ("Report me").

Pope Francis ends his visit to Mexico in Ciudad Juárez, just across the border from El Paso. He will drive home the themes of his visit here — migration, poverty and asking people to shun drug cartels.

But some people in Mexico, including in Juárez, want more from the pope — a change in the church’s doctrine on abortion.

Alejandra is one woman in Juárez urging just that. She is 27 years old and is a teacher in Juárez, in the conservative state of Chihuahua. A few years ago, she got married and, soon after, got pregnant. That’s when she faced a hard choice, one she hasn’t talked to anyone about before, so she asks to use her first name only.

It started when her marriage deteriorated, she says. “My husband began getting angry, like explosive. It scared me sometimes,” she says. His rage, she says, coincided with his smoking marijuana daily, multiple times a day. When she got pregnant, she realized she didn’t want a child with her him, and didn’t want one alone.

Alejandra isn’t religious, but her husband was very Catholic. His family was, too, along with Alejandra’s entire social circle.

“I felt like if people knew I’d had an abortion, they’d look at me like a bad person, like a criminal. There’s just no discussing it,” she says.

So Alejandra did what some women in Mexico feel compelled to do — self-induce an abortion, alone.

She headed to the pharmacy for something she calls a lifeline: Misoprostol. Pills. The brand name is Cytotec. Alejandra learned about it on the Internet. It was designed to treat ulcers, but it can cause an abortion too — a miscarriage — if taken early in a pregnancy. In the US, it must be prescribed and is taken with mifepristone for an early abortion. 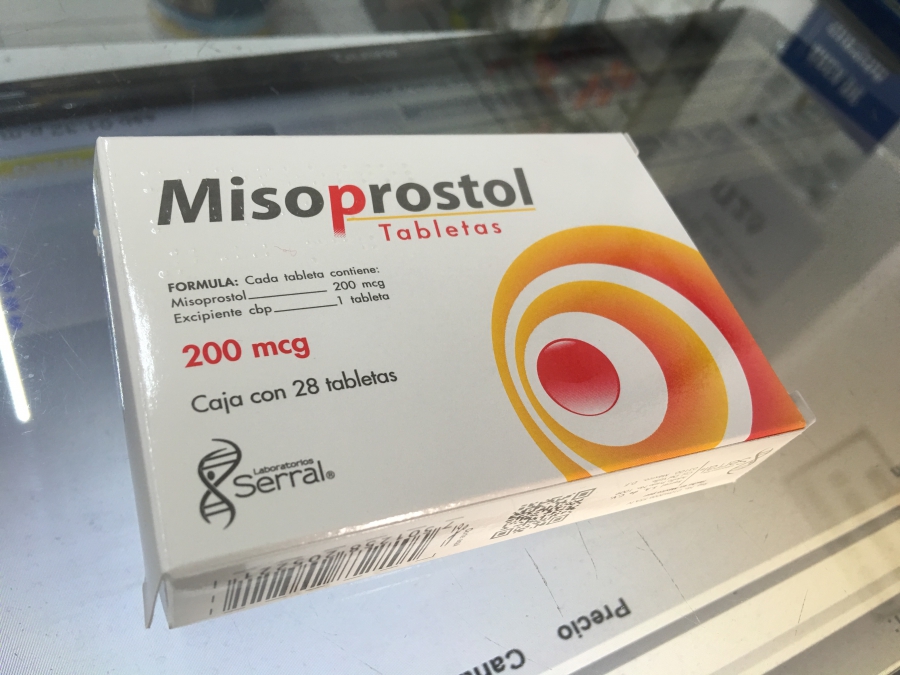 Misoprostol, which many pharmacies in Mexico sell without the required prescription, can induce an abortion. The generic version costs about $25.

But in Mexico, abortion is only legal in Mexico City (up to 12 weeks) and illegal everywhere else, except in the case of rape or if the woman’s life is in danger. But pharmacies sell Misoprostol anyway without a prescription, aware why some woman might be buying it.

Alejandra told the pharmacist the Misoprostol was for her grandma. The pharmacist didn’t ask for a prescription, he also didn’t give her any instructions on how to take the pills.

Concerned, she went to the hospital. But while waiting for the doctor, hooked up to an IV, she got scared. What if the doctor noticed she had used Misoprostol? In Juárez, like in other parts of Mexico that ban abortions, the hospital would be required to report her to the authorities for an illegal abortion.

Some doctors say they look the other way, but not all do. Women have been imprisoned in Mexico, and in Juárez, for illegal abortions.

“I got scared … took off the IV and left the hospital,” she says. She figured her body would take care of itself. Later, she told her husband, now her ex, she had miscarried. He believed her, and she has stayed silent since.

But if things go wrong with a self-induced or unsafe abortion it can be deadly.

“The high rates of maternal mortality due to unsafe abortion in the region convinced me of getting involved in this kind of work,” says Maria Mejía, who runs a pro-choice advocacy group called Catholics for the Right to Decide.

Mejía does see some welcome changes with Pope Francis. “The first one is when he said that the church could not continue to be obsessed with these issues, and then that the Church has to change its attitude toward woman how have lived the situation of an abortion because that is a situation where women suffer. Everybody should be able to understand those moments of pain.”

But things are changing slowly.

There’s a push on social media to get women talking more. Campaigns like #YoAborté ("I aborted") rallied women who had an abortion to post photos of themselves on Twitter holding a card with that hashtag. In Juárez, women's rights groups have also distributed flyers about how to use misoprostol safely.

A flyer distributed by a women's rights group in Ciudad Juárez offers information about how to use misoprostol.

Alejandra says the information online felt, but she still felt closed off from talking to anyone in person about her abortion. “I even thought about going to church and talking to a priest,” she says. But she worried about walking away feeling shame, which she says she doesn’t have about her choice.

As for Misoprostol, it worked for Alejandra, but it can be expensive for women here. The generic version is about $25 a package (the minimum wage in Juárez is about $4 an hour).  Women without that cash can resort to herbs. A popular one is called ruda, or rue in English. Its dried green leaves are sold in a plastic bag and you make a strong tea from it. 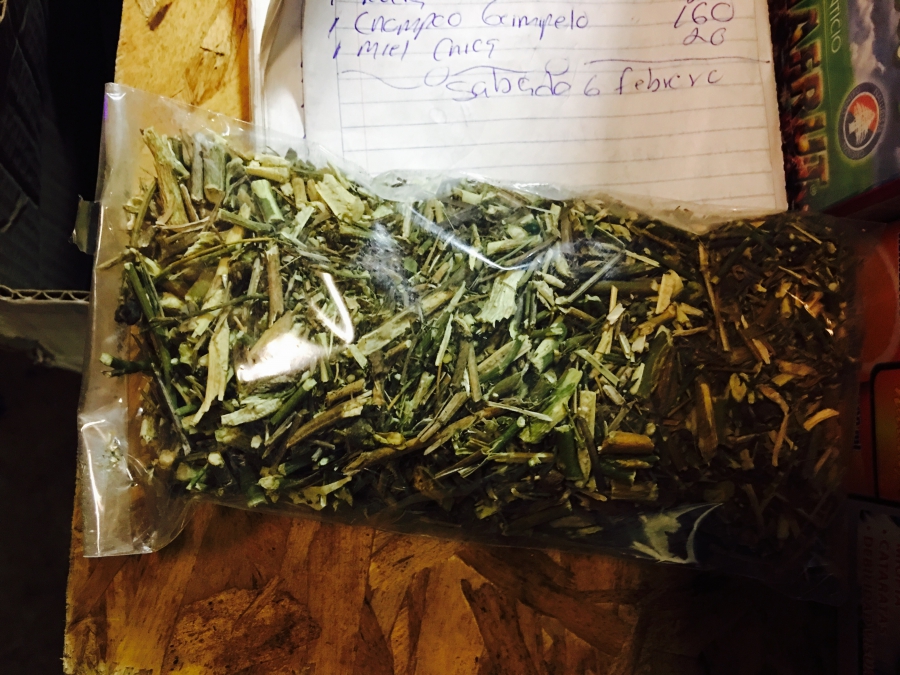 Ruda, a herb that can trigger an abortion, is sold at a market in downtown Ciudad Juárez, Mexico. A pack of the dried leaves, for making a strong tea, costs about $1.50.

In a small booth in a market in downtown Juárez, a man sells the herb. He tells me outright, yes, this can end a pregnancy. It costs about $1.50.

When asked if the herb can be harmful, the man says, “It’s natural.”

But it can be toxic, triggering bleeding and organ damage if taken in excess, as many women trying to self-induce an abortion do. These herbs — and Misoprostol — show up for sale on the black market on both sides of the border here.

Alejandra is glad she didn’t have to take that herb. But she says she regrets one thing: giving herself an abortion alone.

“I scold myself for not telling a friend or someone what I was doing,” she says. “I thought, here I am bleeding in the bathroom alone. What if something happens and nobody knows?”

Now, she says, she feels good talking about all this, and hopes for a time in Mexico when there’s less shame to do so.

A previous version of this story misstated a relationship between the morning after pill and pills used to induce abortions. They are different drugs that work differently.