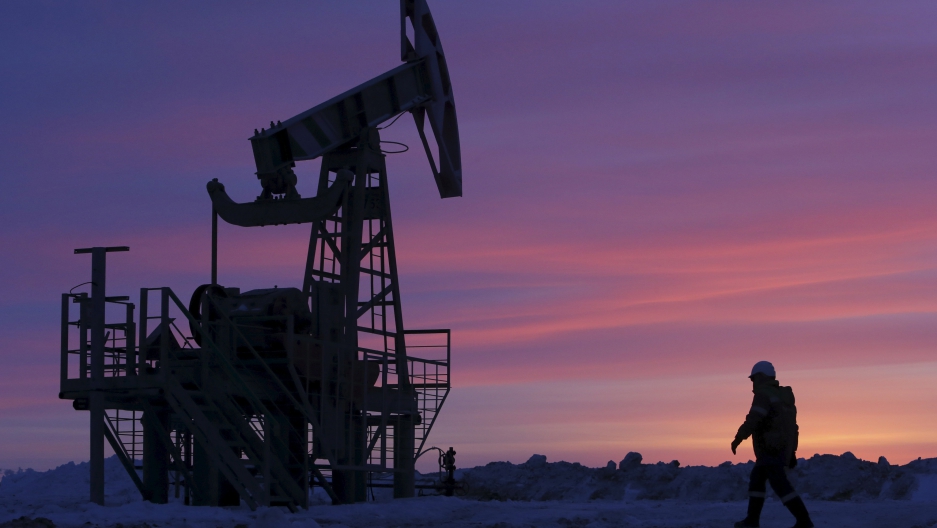 A worker walks past a pump jack on an oil field owned by Bashneft company near the village of Nikolo-Berezovka, northwest from Ufa, Bashkortostan, Russia on January 28, 2015.
Credit: Sergei Karpukhin
Share

It's been described as a “step in the right direction,” but an agreement between Saudi Arabia and Russia to freeze crude oil production could be doomed from the start.

That's how some analysts responded to news on Tuesday that the world’s top two oil producers had struck an accord with Venezuela and Qatar to keep production at January levels. The move is intended to help support weak oil prices.

Markets don't seem sold on the deal, either. It helped trigger a further drop in oil prices on Tuesday — the exact opposite of what Russia and the three OPEC members had intended. West Texas Intermediate, a benchmark for US oils, fell 1.4 percent to settle at $29.04 a barrel in New York, while Brent crude, a yardstick for most international oils, fell 3.6 percent to $32.18 in London. Prices rose slightly on Wednesday morning, but still hover around the lowest levels in over a decade.

More from GlobalPost: The lowest oil prices since 2003, explained

There are at least three reasons why the production freeze might fail right away. First, the deal doesn't lower the production levels that created the market glut in the first place — it just pauses them where they are. Second, other major oil exporters need to agree to hold output steady, too, or the deal is off. And third, oil-rich Iran remains a huge question mark.

Here's a deeper look at each of those problems.

There's already too much oil

Here's the main issue: Freezing oil production will just lock in levels that many analysts already consider too high.

“The reason we agreed to a potential freeze of production is simply the beginning of a process,” Saudi Oil Minister Ali Al-Naimi said following Tuesday's meeting in Doha. “We don’t want significant gyrations in prices. We don’t want a reduction in supply. We want to meet demand. We want a stable oil price.”

Some analysts say that's a bit rich coming from Saudi Arabia, which last month boosted output by 70,000 barrels a day to 10.21 million.

Ain't that the truth.

OPEC crude oil output, which accounts for about 40 percent of global production, rose by 280,000 barrels per day in January to 32.63 million as Saudi Arabia, Iraq and Iran all “turned up the taps,” as the International Energy Agency put it. Crude oil stockpiles also increased as supply continued to exceed demand.

Given the market is already “awash in oil” and demand is expected to weaken further this year, analysts have questioned how freezing output would get rid of the market glut and halt the fall in prices, which have plunged about 70 percent since mid-2014.

“The market does not need a freeze. It needs a reduction,” Michael Lynch, president of Strategic Energy and Economic Research in Massachusetts, told the New York Times. “They are not offering anything like that.”

There are lots of countries to get on board

Iraq said it's willing to cap production if other producers do so. "Iraq is with any decision that contributes to propping up oil prices," an Iraqi oil ministry source told Reuters.

Kuwait also said it would commit to the deal if other major OPEC and non-OPEC producers followed suit.

Talks are expected to be held with Iran and Iraq as well as non-OPEC members Oman, Kazakhstan and Azerbaijan, but convincing them to fix production won’t be easy, particularly in the case of Iran. It's also unclear whether the United Arab Emirates, Algeria, Nigeria, Ecuador, Libya, Angola and Indonesia will sign on.

No matter how many countries get on board, the first problem remains: The deal on the table is a production freeze, not a cut.

Take for example Iraq, the second-largest OPEC producer. The same day Iraq announced it would go along with the freeze, it also announced that output from all its oil fields averaged 4.7 million barrels per day in January. That was a record.

Such production increases prompted the IEA this month to revise its forecast for the global oil surplus — that is, the amount of oil the world is producing beyond its needs — in the first half of this year to 1.75 million barrels a day, compared with its estimate of 1.5 million in January.

It also warned that “the likelihood of coordinated cuts is very low.”

Iran is a huge question mark

To that end, Tehran has said it plans to increase oil output and exports by one million barrels a day this year as it seeks to reclaim lost market share. Convincing them of anything else will be very difficult.

“Iran will not forgo its share of the market,” Iran's oil minister Bijan Zanganeh said Tuesday when the freeze deal was announced.

After meeting with Iraqi, Qatari and Venezuelan oil ministers on Wednesday, Zanganeh voiced support for efforts to stabilize prices, but didn't commit to joining a production freeze.

"We look forward to the beginning of cooperation between OPEC and non-OPEC countries and we support any measure that can stabilize the market and increase prices," he said, according to the Iranian Oil Ministry's news service Sana.

Those words might give some hope to the oil markets, but don't expect Iran to slow down any time soon.