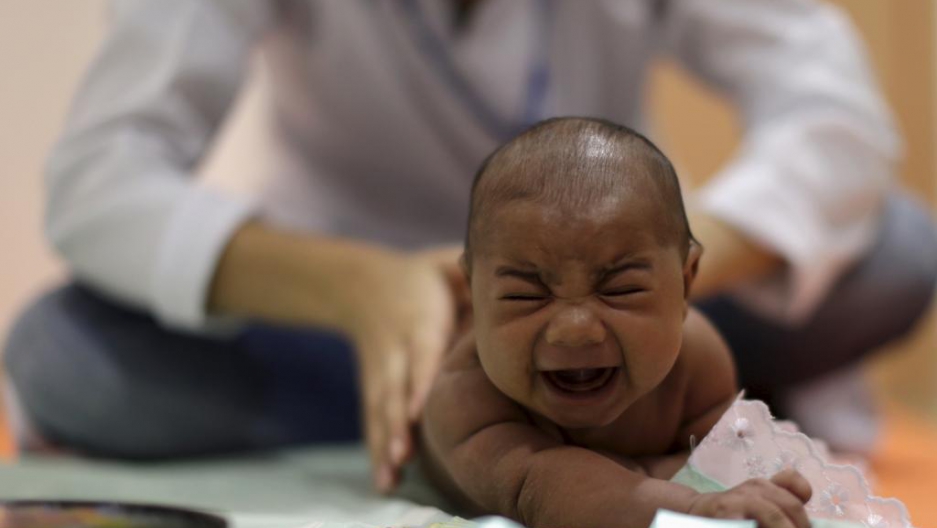 A baby born with microcephaly reacts to stimulus during an evaluation session with a physiotherapist at the Altino Ventura rehabilitation center in Recife, Brazil on January 28, 2016.

The Zika virus isn't the only thing that seems to be spreading quickly in Brazil. Rumors about the surge in microcephaly cases are, too.

The most widely accepted hypothesis is that Zika is responsible for at least some of the cases of the severe birth defect. It’s a plausible one, given what we know about the geography and timing of the stark rise in reported cases of microcephaly, as well as what we know about viruses — some others have been definitively linked with the condition.

But the Zika link is still unproven, and wouldn’t account for all the reported cases even if it were, leaving lots of room for alternate theories, however far-fetched.

One circulating widely in Brazil blames the rash of microcephaly reports on vaccines. Another claims that the real culprit isn't mosquitos carrying Zika, but the pesticides used to control those mosquitos.

"I would say that that is beyond extraordinarily unlikely," he says. “I never want to say ‘impossible,’ but this is about as close to impossible as things can get.”

"It's certainly plausible," he says, “but we haven't heard enough scientific information to weigh in on whether it's real."

And like some viruses, he says some toxins have been associated with microcephaly, "So the theory that a pesticide could do it is not totally out of line."

On the other hand, he says there's no scientific evidence for it and the chemicals being used for mosquito control in Brazil "have been tested for their ability to cause birth defects, and nothing's been found."

What’s needed to know for sure, he says, is a lot more study.

But Morens says the same is true for the Zika hypothesis.

"I can say that what we've heard about these cases of microcephaly and the epidemic of Zika, and now the possible chemical or pesticide exposure, are claims and statements that don't yet have scientific backing," Morens says.

"My sense is that even some scientists are confused … What we really need is more scientific information that looks at cause and effect, rather than just association."

Scientists around the world are scrambling to do just that.

But in the meantime, Morens suggests that the uncertainty about the cause or causes of the microcephaly surge doesn’t mean they’re equally likely.

"I think the way the evidence is falling out is that some of these cases may actually be caused by the [Zika] virus, but other cases may result from other causes — background causes, or from an increase in reporting, an increase in diagnosis," he says.

Morens co-authored a recent article on what’s known and not known about Zika and microcephaly.

Because microcephaly “has been associated with many different RNA and DNA viruses… a causal link between Zika and microcephaly is plausible,” Morens and his co-author Anthony S. Fauci of the NIH wrote.

There is evidence of Zika in the brains of kids with microcephaly, Morens says, but that makes a connection so far in only a "very small" number of babies or fetuses.

"We can't assume that because in two or four or six or 10 or 15 babies we find this association, that it explains all the rest of them," or even proves causality, Morens says. "You can't prove a scientific reality by compiling different anecdotes, no matter how true they are."

The only way we can really get an answer to all these questions, he says, is through epidemiological studies — carefully crafted studies following real people in the real world for months or years.

But, he says, those things can’t be done quickly. So the uncertainty about what’s causing Brazil’s microcephaly surge — and to what degree it may grow into a real concern elsewhere — is likely to linger for quite a while. As is the room for lots of competing hypotheses.

Maria Murriel contributed to this report.