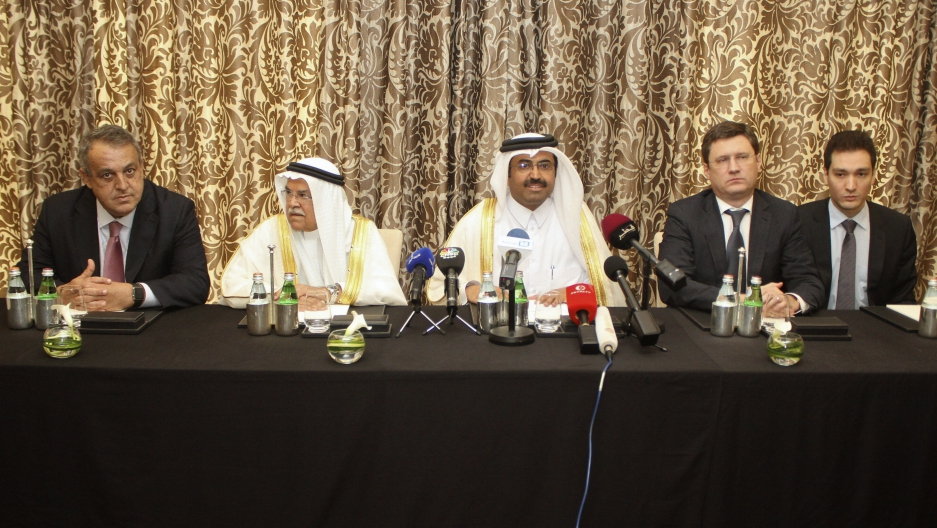 Get ready to pay more at the pump — maybe.

Russia, Saudi Arabia, Venezuela and Qatar announced on Tuesday that they've agreed on a plan to freeze oil production at current levels to help stop a decline in oil prices caused in part by over-supply in the market. They're waiting for other major oil producing nations to join them before going ahead. Iraq said they'd be up for it, too.

Oil prices have been hovering around their lowest levels in over a decade, and countries that depend on oil exports to drive their economies are understandably freaking out. And yet, they've kept on pumping.

But even if the biggest producers slow down from here, there's one question everybody's still asking: What will Iran do?

Fresh off the lifting of most international sanctions, Iran is looking to get back in the oil game. It will take time for the country to become a major player once again, as GlobalPost's Allison Jackson explains, but a commitment from Tehran to manage production levels could go a long way toward stabilizing the markets. Iran's oil minister said in response to the agreement that his country would not "relinquish its share" of the market, but that there's "room for discussion."

For hundreds of thousands of Syrian refugees living in Lebanon, winter is a particularly miserable time of year. Most of them stay in makeshift shelters and empty or unfinished buildings where the winter weather gets uncomfortably close.

Lebanon appears to want it that way.

The scale of the refugee crisis facing the country is severe. Though it has a population of just four million, Lebanon is now hosting more than one million Syrian refugees.

Lebanon is not a signatory to the 1951 Refugee Convention, which designates certain rights for refugees and responsibilities for host countries. Due to limited capacity and fears that refugees might never leave, the Lebanese government has refused to allow the UN to set up permanent camps. So hundreds of thousands of refugees build their own shelters or find accommodation where they can.

GlobalPost Senior Correspondent Richard Hall reports from Zahle, Lebanon on what this means for refugees trying to survive winter, and for the aid groups trying to improve their lives.

Europe's coming for the euros stuffed in your mattress.

When it comes to many commercial transitions, people in wealthy nations already live in cashless societies. (Did you audibly groan the last time the person ahead of you in the supermarket started counting a fistful of bills?) Now, European officials are cracking down on large sums of physical currency. Why? There's too much of it out there, they say, and it can't all be legal.

For each person living in the euro zone, including children, there are around 3,500 euros in circulation. That's a lot — just think about how much cash you have on hand right now. Experts say the glut of bills plays straight into the hands of money launderers, terrorists and other schemers who rely on big notes and even bigger transactions to conduct their illicit business.

Germany's approach to the excess cash, announced earlier this month, was to set a 5,000-euro limit on cash transitions. And Germans are furious, GlobalPost correspondent Dan Peleschuk reports from Munich.

Welcome to the cashless future. Empty your pockets.