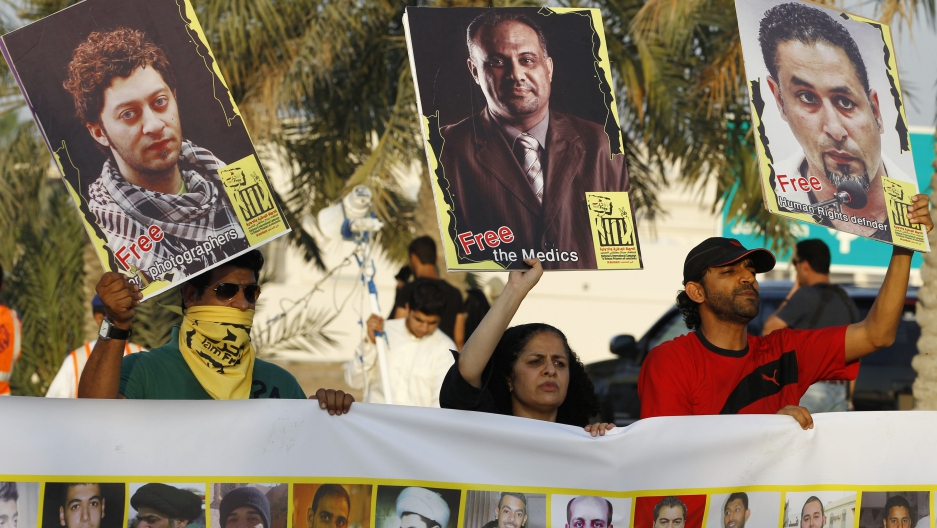 Protesters hold up pictures of journalists, doctors, and activists as they take part in a solidarity march asking for their release, during an anti-government protest organised by Bahrain's main opposition party Al Wefaq in Budaiya, west of Manama, May 9, 2014.
Credit: Hamad I Mohammed
Share

BEIRUT, Lebanon — Four American journalists were released from police custody in Bahrain on Tuesday after being held by authorities apparently for reporting on anti-government protests.

Journalist Anna Day and three members of her camera crew were arrested on Sunday in Sitra, a village east of the capital Manama, where demonstrations marking the anniversary of the country’s uprising five years ago were taking place.

A statement from the city’s public prosecutor said the four had been charged with "taking part in an illegal gathering with criminal intent and undermining public security,” but were released pending further investigation. A lawyer for Reporters Without Borders said the group were on their way out of the country by Tuesday afternoon.

Bahrain, home to the US Fifth Fleet, has a habit of detaining foreign journalists as they try to report on unrest in the country, but most are usually released or deported relatively quickly. The same is not true for Bahraini journalists, many of whom have spent years in jail for reporting critically on the government.

There are currently seven journalists imprisoned in Bahrain, according to the Committee to Protect Journalists:

"Today, the tiny island of Bahrain has become one of the leading jailers of journalists in the world per capita," said Jason Stern, CPJ's senior researcher for the Middle East and North Africa.

"The American journalists now get to go home, thanks much in part to a tremendous international outcry. But for the Bahraini journalists who remain behind bars, who will speak out for them? These journalists face a myriad of charges like participating in illegal protests, attacking security forces, or attempting to overthrow the government. But the real crime they have committed is journalism. "

The crackdown since what became known as the Pearl Revolution has sought to quell all opposition to the Bahraini royal family.

On Feb. 14, 2011, while much of the Arab world was in revolt, widespread demonstrations broke out in Bahrain against the ruling al-Khalifa family — a Saudi-backed Sunni dynasty that rules over a majority Shia population (the island nation has a parliament, but it is widely regarded as a rubber-stamp institution for the ruling family’s policies.)

The demonstrations were brutally suppressed by security forces, which were backed by troops from Saudi Arabia. Dozens of protesters were killed.

Since then, smaller-scale protests have continued. But so too has the government’s attempts to repress them.

Human Rights Watch said that in 2015 Bahraini authorities “continued to prosecute individuals, including high-profile activists and opposition figures, for exercising their right to freedom of expression.”

Opposition leader and head of the Al Wefaq party Ali Salman has been in jail since June 2015 after being sentenced to four years.