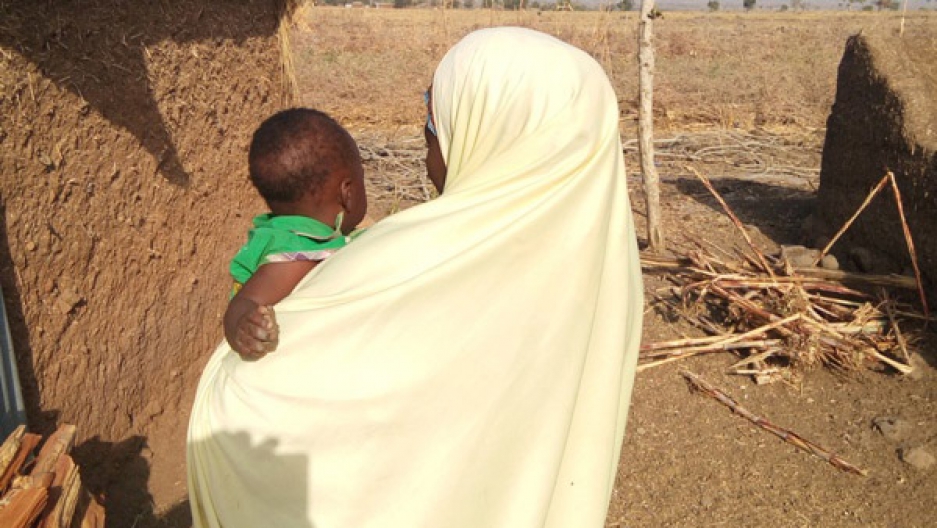 Zara John, 16, holds her baby, with her mother watching in the background.

The Boko Haram commander used a knife and a piece of charcoal to tattoo his name on 14-year-old Zara John.

"He told her with that mark he made on her stomach, whenever he came back from battle he could identify her," says Nigerian journalist Adaobi Tricia Nwaubani, who spoke with Zara John. "She was his, and would be identified as his forever."

And it was a forever Zara John was looking forward to.

Although the teenage girl had been kidnapped from her isolated village of Izge in northeastern Nigeria with truck loads of other girls in February of 2014, she told Nwaubani she grew to love the commander she was forced to marry.

A year after the Nigerian military freed her from captivity, the girl is still pining for her extremist husband, who she called Ali.

"She described a man who was kind to her. She said he told her stories of his family. He was a fisherman, and he joined Boko Haram after his father and his brother were killed by the Nigerian military," Nwaubani says. "She said he bought her clothes, he bought her food, made sure she was comfortable and in her exact words 'He gave me everything that a woman needs from a man.'"

Zara John described for Nwaubani her initial months in captivity in a town called Bita, near the Sambisa Forest.

"She says as soon as the girls arrived, the Boko Haram men told them that they were now their slaves," Nwaubani says. "They started living a life of doing chores, and being shouted at and of course learning the Koran and being taught how to be good Muslim women "

Two months later, marriage to a Boko Haram commander granted Zara John unheard of privileges, like living in a thatched house with just one other person. Ali gave Zara John a cell phone, and called her when his duties required him to leave Bita.

He wasn't there the day the Nigerian military stormed into the village in March of 2015.

"She said if she had a gunat the time the Nigerian army came to rescue her, she would have shot the soldiers," according to Nwaubani. "The first thing she thought was 'These infidels, the unbelievers have come to disturb us.'"

Nwaubani says Stockholm syndrome goes part of the way to explaining Zara John's continuing allegiance to her abductor.  She says the low status of women in northeastern Nigeria is another compelling reason Boko Haram captives might be reluctant to leave extremist groups.

"She would be serving a man anyway," Nwaubani says. "She found herself in this new life, being valued by one man, being told how they were changing the world and fighting a war, and how they were going to start a new life."

Zara John now lives with her mother in a town further from Boko Haram's strongholds. She has tried to keep in touch with her extremist husband. But that became impossible after Nigerian government soldiers seized her cell phone.

Now she has a reminder that ensures she thinks about her husband every day. Her son is seven months old. Zara John says he looks just like Ali.