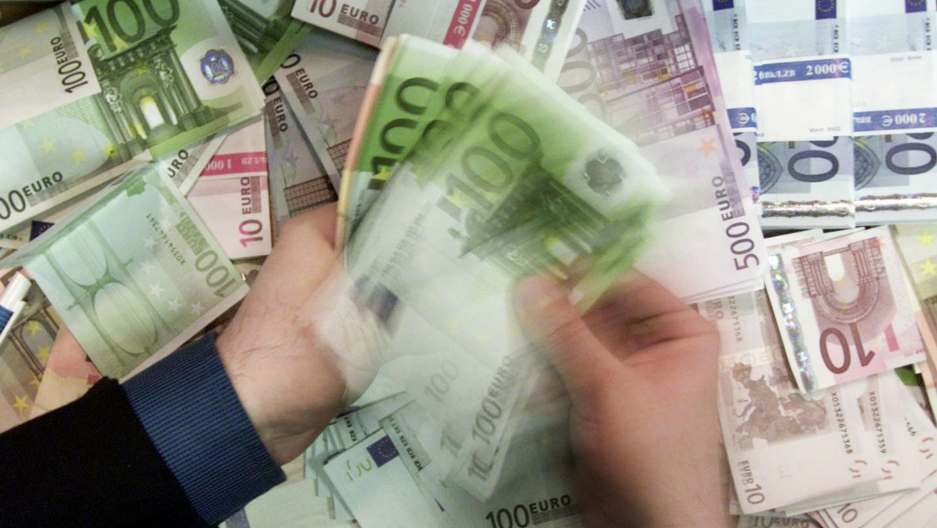 A London bank worker counts out euro notes three weeks before they became legal tender across most of Europe, December 12, 2001.
Share

MUNICH, Germany — Germans are famously fond of cash. But that didn’t stop their government from announcing plans earlier this month for a 5,000 euro limit on cash transactions, following similar moves in recent years by France, Italy and Spain.

Last week, a top European Central Bank official told a French newspaper the days of the 500-euro note may be numbered.

In line with global trends leading to a “cashless future,” European officials are cracking down on large sums of physical currency. And there’s a simple reason, experts say: there’s just too much of it out there.

The glut of bills plays straight into the hands of money launderers, terrorists and other schemers who rely on big notes and even bigger transactions to conduct their illicit business.

“Most people are not aware of how much cash we have circulating in the euro zone,” said Sebastian Dullien, a senior policy fellow at the European Council on Foreign Relations, referring to Europe’s single-currency union of 19 countries.

More from GlobalPost: Since China devalued its currency, it’s spent $400 billion trying to save it

He points to the huge gap between the region’s population of roughly 330 million and the one trillion euros currently in circulation, which adds up to around 3,500 euros per person — children included.

“For my family of four, that would be more than 12,000 euros, but I’ve never carried that much cash around and probably neither has anyone else I know,” Dullien added. “So there must be people who have huge amounts of cash, and chances are this is not completely legal.”

Other researchers have reached similar conclusions. Peter Sands, a Harvard economics expert, recently proposed phasing out high value currency, from the 500-euro note to the $100 bill.

“Such notes are the preferred payment mechanism of those pursuing illicit activities, given the anonymity and lack of transaction record they offer, and the relative ease with which they can be transported and moved,” he wrote.

It’s not only cash that’s come under attack, though. European officials have also discussed tougher rules on virtual currency, such as Bitcoin, and prepaid debit cards.

Few would disagree with fighting terrorism and organized crime, but not everyone is on board with Germany’s proposed cash limit.

In this country, cash accounts for the vast majority of payments. There are various theories explaining why Germans love cash — including their strong aversion to debt — but whatever the reasons, the measure hasn’t gone over too well.

That’s probably why the country’s leading tabloid, Bild, published an open letter exclaiming, “Hands off our cash!” and political forces across the spectrum are claiming the new measure would infringe on personal freedom and privacy.