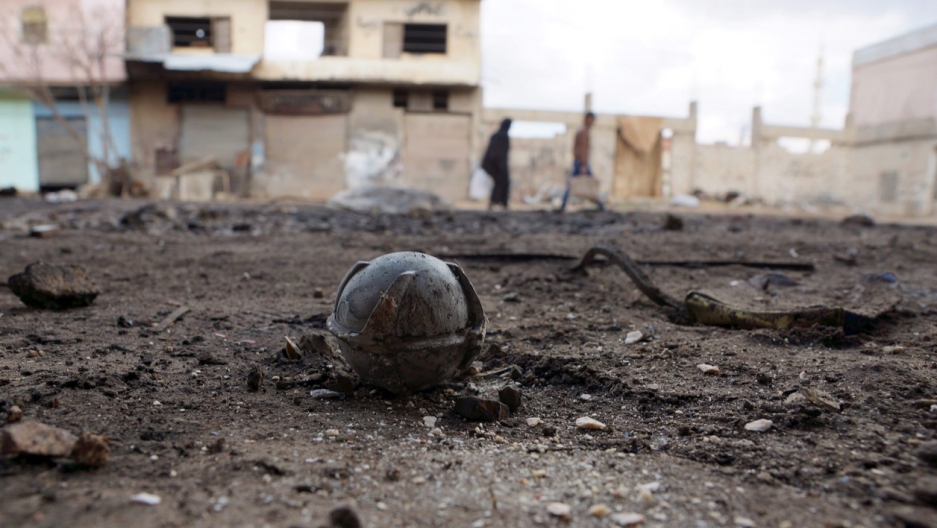 World powers, including Russia and the United States, have agreed to a truce in Syria. Sort of.

It's either a major breakthrough in the international effort to end the Syrian conflict, or, as some diplomats are saying, according to the BBC, "it's not worth the paper it's printed on."

US Secretary of State John Kerry announced the agreement alongside Russian Foreign Minister Sergey Lavrov after a meeting on Thursday in Munich, Germany of the 17-nation International Syria Support Group. The first step will be delivering humanitarian aid over the next few days. Then within a week there will be a "cessation of hostilities" and perhaps a more permanent ceasefire down the line.

In some ways, this is a huge deal. It's the first time since the beginning of the Syrian conflict in 2011 that any kind of formal truce has been declared. It suggests that the US and Russia, which are on the same page in Syria only to the extent that they're both dropping lots of bombs there, might still be capable of working as diplomatic partners. And it means beseiged Syrian cities, where some people are literally starving to death, could receive aid.

But there are plenty of reasons to be skeptical.

First of all, the Syrian regime and extremist rebel groups weren't party to the negotiations, so the "cessation of hostilities" doesn't apply to the two sides at the root of the war. The Islamic State, Jabhat al-Nusra and Bashar al-Assad will continue to do whatever they want.

Second, the "cessation" doesn't start for a week, which means a brutal, Russian-backed regime offensive on Aleppo will continue. GlobalPost Senior Correspondent Richard Hall has reported from the Turkey-Syria border on the human cost of that campaign.

Researchers trying to pinpoint what's causing birth defects in Brazil might have just hit a setback.

A new study in Brazil’s northeastern state of Paraiba found hundreds of cases of microcephaly in 2012, 2013 and 2014 that predate the suspected arrival of the Zika virus in Brazil during the 2014 soccer World Cup.

The report calls into question the link between microcephaly and Zika, which some experts claim is getting clearer and clearer.

“Many other potential factors need to be considered as the cause of the outbreak," the researchers concluded. "Among them figures the possibility of boosting effects from associated infections, perhaps even viral infections, such as DENV [dengue fever] and CHIKV [chikungunya virus], both carried by the same Aedes aegypti vector. Also to be considered is teratogens exposure, such as vaccines or drugs used in early pregnancy.”

These aren't the first experts to raise doubts about microcephaly figures being put out by Brazil’s Health Ministry. Last month, the medical body responsible for monitoring birth defects in Latin America said the apparent increase in babies with small heads “is probably due to active search and over-diagnosis," spurred in part by intense media interest in the story.

More than anything, GlobalPost Senior Correspondent Will Carless explains, it's yet another reminder that lack of good data is making it near impossible to know exactly what's going on in Brazil.

It turns out that a German political party can recommend shooting refugees and still be enormously popular.

Meet Alternative for Germany (AfD). At a time when Europe’s refugee crisis has boosted support across the continent for populist forces who cast newcomers as unwanted intruders, AfD's aggressive anti-immigration rhetoric has helped it grow to become the country’s third most popular political force.

After Germany admitted more than 1 million Syrian asylum seekers in 2015, polls now show an overwhelming majority of the population believes the government has lost control over the refugee situation. That national mood has been great for the AfD.

AfD leaders shocked moderates recently when they said they approved of shooting refugees who attempt to illegally cross the border.

"It was extreme even for some of the AfD’s own followers," GlobalPost correspondent Dan Peleschuk writes, "but it captures just the kind of raw discontent the party is trying to harness as public frustration grows over the refugee crisis."

The next test for the AfD, which currently polls around 12 percent nationally, will be local elections next month in several German regions.