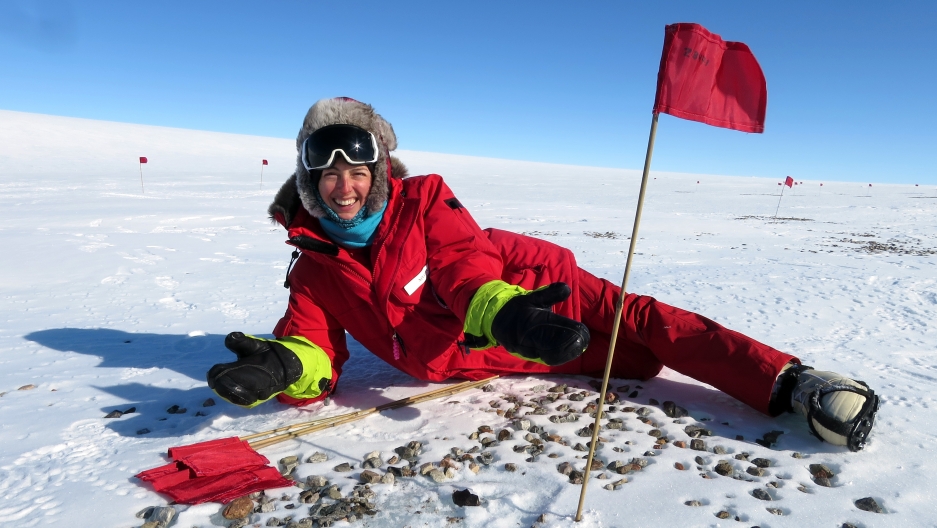 Nina Lanza knows space rocks. In her day job as a staff scientist at Los Alamos National Laboratory, she operates the Curiosity Rover’s ChemCam, using a rock-vaporizing laser to analyze the Martian surface.

But recently, Lanza was having a very different kind of encounter with space rocks: She was picking them up off of the Antarctic ice.

“I've done a lot of winter camping, but this is much colder and more sustained than anything I've ever done before,” Lanza says during an audio broadcast from the southernmost continent in the world. “I forgot to take my contact lenses and solution into my sleeping bag with me before going to bed and this morning I woke up and they were frozen solid.”

This winter, Lanza has been a rookie member of the ANSMET (the Antarctic Search for Meteorites) field team. For 40 years, the project has sent teams of scientists to the bottom of the globe to recover meteorites from all over the solar system, including chunks of the moon, comets, even Mars.

On this trip? Lanza and her colleagues recovered a total of 569 meteorites.

“They are just waiting for us to come and find them,” Lanza says. “You can imagine that blue ice ... and then you just look and there's some dark spots on them. And those are rocks and frequently those rocks are from space.”

Meteorites fall to Earth all the time, but Antarctica is a particularly good place to find them.

“We're lucky with Antarctica,” Lanza says. “It's this big white sheet covered in glaciers. And so these meteorites just become embedded in the ice and start flowing with the glacier. And in some places the glacier will run into something — like the mountain range that we were in — the Miller range. It will slow down and then the winds ... will start to remove some of that ice and that acts to concentrate the meteorites in these locations. So we can actually go there and find many more meteorites than you might imagine would fall in a single location.”

Scientists can tell meteorites apart from Earth rocks by analyzing them for certain characteristics.

“You want to look for rocks that have what's called a fusion crust,” Lanza says. “That's a very thin, shiny outer coating which forms when the rock falls into the atmosphere of the earth and heats up the little bit so it'll have this very shiny exterior. And then sometimes it'll break in half when it hits the ice or something and you can often see what are called chondrules, which are these very round grains of material.”

Now the 569 meteorites that Lanza and her team have recovered are on a container ship where they will be kept frozen until they get to Johnson Space Center. Eventually the rocks will be slowly thawed in a dry atmosphere to keep water from altering their geology in any way. The team of scientists who eventually analyzes them will hope to learn a lot from the finds.

“We're learning all about the origin of our solar system,” Lanza says, “What were the building blocks, and then how the solar system evolves. And not just even the solar system but the specific bodies within the solar system…there’s nothing like having a rock in your hand and being able to analyze it in a laboratory repeatedly and with different techniques and over time because that really gives you a lot more information…that's really telling us a lot about planets that we that we are studying right now.”