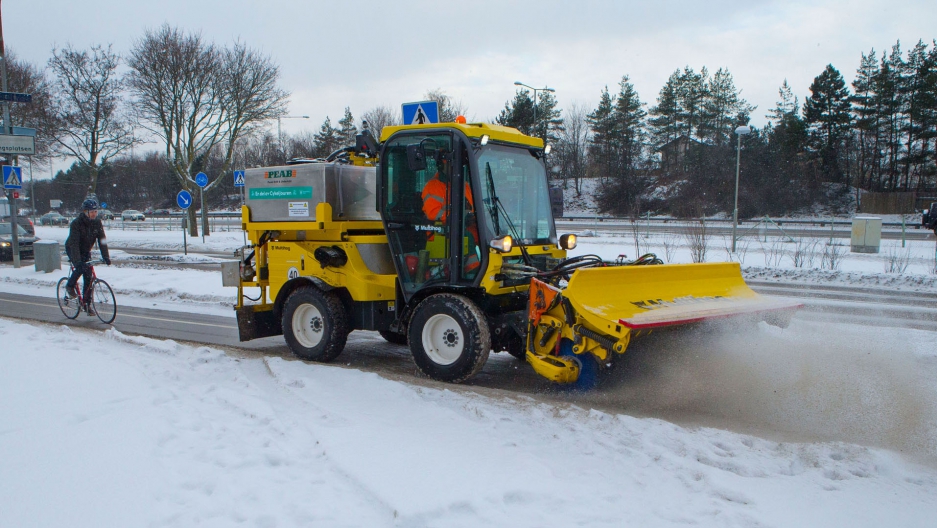 In Boston, it’s been a relatively mild winter. But people here are still having collective nightmares about last year — around nine feet of snow fell in six weeks.

Roads were impassable, the trains stopped running, and cars were buried for weeks under mounds of snow. The city paid tens of millions of dollars in overtime pay. And, according to the firm Planalytics, it cost New England between $3 and $5 billion in lost productivity.

It snows a lot in Stockholm too. But the city keeps on going. Always.

If I ever start a company, the first person I’m hiring is this guy: Sören Stark with Strukton rail, a city contractor. Stark’s job description is literally to make the trains run on time. (And the subways.) When he got promoted to the job a few years back, he took things very seriously.

“The first year, I’d go to sleep at 2 o’clock in the morning because I wanted to look at the forecast, wake up at 4 o’clock,” said Stark, who also told me he drinks 10 cups of coffee a day, by the way.

But his sleep deprivation did pay off. Stark showed me a lot of data and graphs. He pulled one up for rail performance last winter. 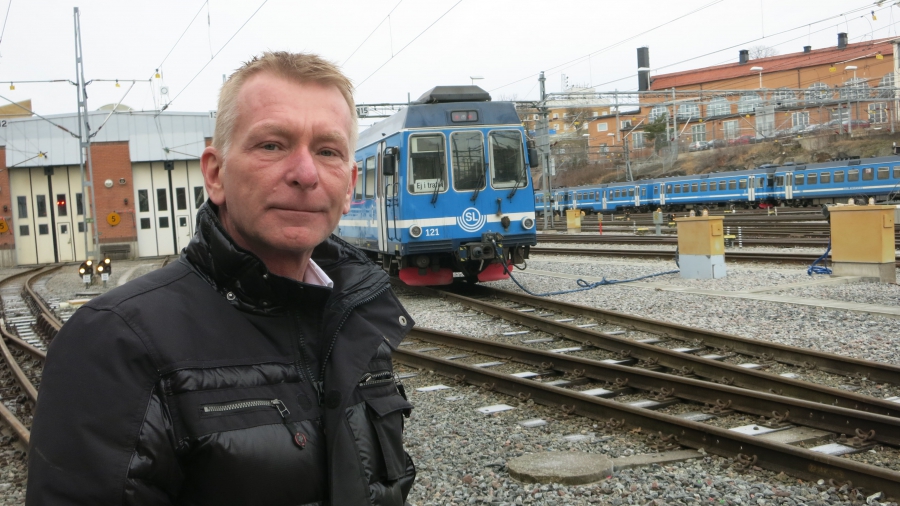 Sören Stark's job is to make the trains run on time in Stockholm. And they do.

At this point, I was thinking that Strukton Rail is using some seriously amazing technology: aerodynamic plows or snow-eating robots. Nope. It basically comes down to preparation.

“Our goal: We find it before it breaks," said Stark. “And we also practice that the machines and the organization works.”

I asked: Doesn’t it cost a lot of money to practice?

“Yes, but you need to practice,” said Stark. “You need to know that everything is working. It’s like you are going to the dentist every year.”

He showed me the data: Every time he has to take a train out of commission, it’s a much bigger dent in his budget.

Preparation also begins months before winter arrives — trimming branches and clearing leaves in fall. But he’s telling me all of this in an office with PowerPoint.

I got out and rode the subway and trains for nine days in the dead of winter. There wasn’t that much snow, but still, the trains always showed up exactly on time. And if you miss your ride, there’s another one two to four minutes behind. The cars are super clean too. And you almost always can get a seat, even in rush hour.

And on those days when the snow is just too much in Stockholm, the trains keep on going.

OK, Stockholm, you’ve convinced me. But what about your roads?

I went to Trafikkonteret, the city agency that manages Stockholm’s streets, where Peter Ringkrans unfolded a map of the city.

“You can look here,” said Ringkrans pointing at a grid of the city. “The red streets must be finished in two hours after the weather starts snowing, and the blue in four hours, and the grey is six hours.”

I was starting to get it: The key is to be hyper organized. But what about when there’s just too much snow?

Ringkran’s colleague Susanne Pettersson took on that one.

“This sidewalk is used for snow storage for the rest of the winter. Pedestrians are advised to use the cleared and sanded sidewalk on the other side of the street,” said Pettersson.

It’s just so logical that you want to scream.

They also dump a lot of snow in the Baltic Sea and Lake Mälaren, after they clean it then grind it up. (Incidentally, if you live on the side with the snow, there is a cleared path to your door, of course.)

But what about the epic blizzard, like the one a few weeks ago that shut down New York and Washington? I asked: doesn’t Stockholm shut down then?

“No, never shuts down,” said Pettersson.

One problem we’ve had in Boston in winters past is that sometimes cars get buried in snow, and then sit there for weeks and weeks. 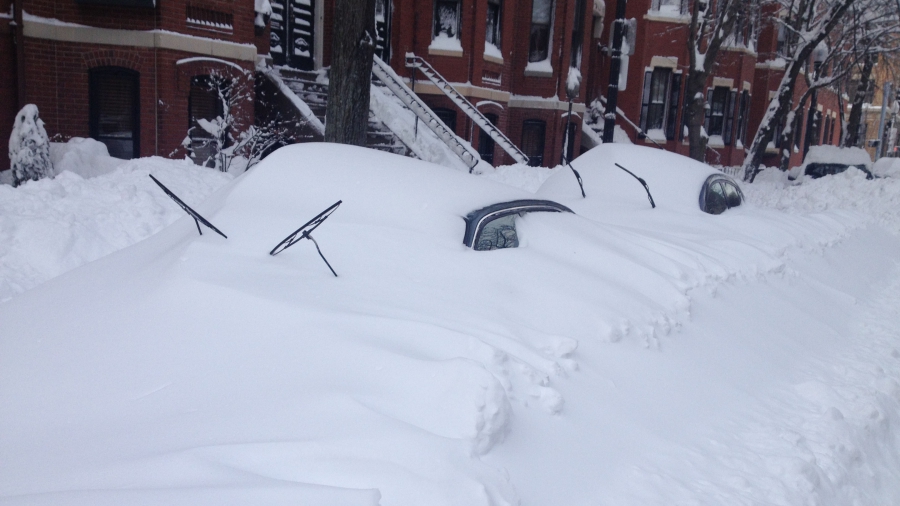 Pye Seaton with Trafikkonteret looked shocked when I told her this.

“It’s never happened in Stockholm, no,” she said.

Now, in fairness to the hard workers in Boston, during most winters, and most storms, the cities of greater Boston do a fantastic job clearing the roads and highways quickly. But clearing snow and ice from bicycle paths leaves something to be desired. The area relies on the generosity of firms like New Balance and other groups to help keep the paths clear. But budgets are tight. And if you’re a cyclist, one patch of ice or snow can ruin you. And believe me, there’s often more than one.

Back in Stockholm, that’s the real test: Cycling paths. I bundled up and went for a ride with Riggert Anderson. He used to manage the city’s subway extension and is recently retired.

“I cycle all year round and I’ve been doing that for like 20 years here in Stockholm,” said Anderson, who bikes even when it was 5 degrees Fahrenheit and snowing. (He uses studded tires.)

“It’s chilly. But you have to put a lot of layers on and be aware of protecting your face especially,” said Riggert.

I asked about snow and ice on the paths.

“They clear that every night. So when you go in the morning, most of the time it’s well cleaned if it has been snowing.”

I need to correct one point he made — they don’t just clean the paths every night.

They even clear on the days it doesn’t snow.

“On the days where it’s a risk for slippery roads, yeah,” said Karlström.

He showed me one of the city’s newest toys, a “Multihog” from Ireland. They’re small, one seat tractor-like machines that brush away snow and ice. A big tank sprays a saltwater mix. Researchers are studying the proper mixture to get the optimal friction on about 100 miles of bike paths here. Nine machines are currently in use throughout greater Stockholm.

How does it work? The proof is in the pudding. Let’s return to the end of my ride with Riggert Anderson.

“I think we made maybe, something between 12 and 15 km (seven to nine miles),” said Anderson, as we dismounted our bikes.

I quizzed him and asked how many patches of ice we hit during our ride? 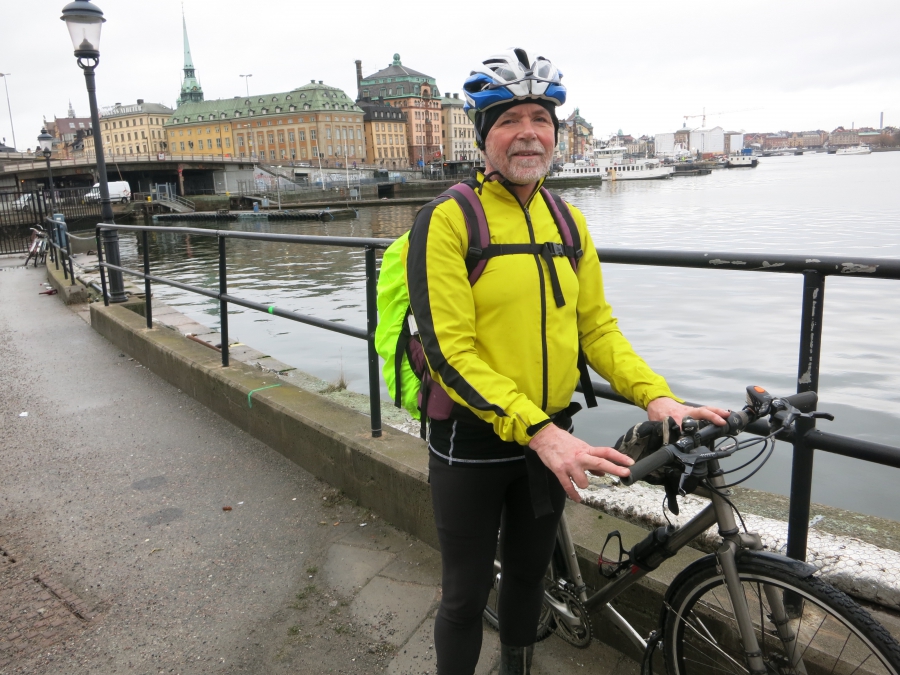 Riggert Anderson cycles year round in Sweden in rain, sleet, or snow.