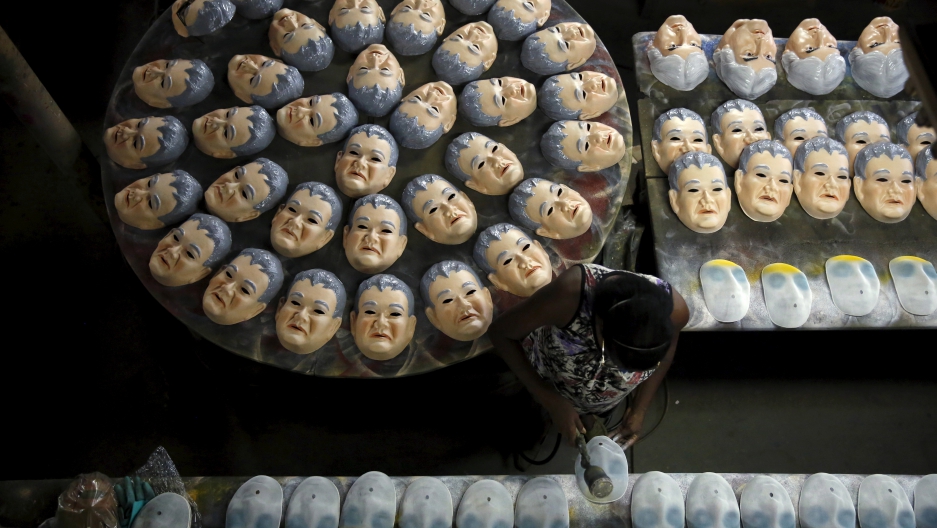 A worker puts the final touches on a carnival mask bearing the likeness of federal police agent Newton Ishii, at a costume factory in the suburb of Rio de Janeiro, Brazil, January 11, 2016.

For Brazil's Carnival, which officially ended Wednesday, the recording for one of this year's most popular marches begins with the sound of knocks on a door, which creaks open.

“Oh my God, it's going downhill,” the lyrics begin. “The Japanese man from the Federal Police knocked on my door!”

Newton Ishii is a Japanese Brazilian officer who has become famous on the Internet for stoically perp walking Brazil's rich and powerful into police cars as they fall under investigation in the Lava Jato anti-corruption probe. Since early 2014, Brazilians have watched a seemingly endless parade of current and former lawmakers, black-market money dealers, and executives at both public and private companies be marched away.

In the photos of Brazil's overwhelmingly white power brokers, the the gray-haired, sunglass-wearing Ishii left an impression.

During Brazil's dictatorship, Carnival lyrics were one of the few places where hinting at dissent was possible, and today the weeklong street party can be read like a euphemism-free newspaper of current events. This year, songs featured the Zika virus (“If you don't store that water well, the mosquitos will come”), the approach of the Olympics (“Row, row, row your boat in the bay full of poop”), and a bill to restrict access to abortion in the case of rape (revelers carried signs saying, “Take your hands out of my uterus, Congressman”).

The song about Ishii concludes, "You’re wrong, sir! I’m a working man, not a lobbyist, senator, or congressman!" Although corrupt officials have been mocked in Brazilian Carnival for decades, this lyric refers to the unusually deep reach of the Lava Jato investigation. The probe, which started as a look into contract fixing at state oil company Petrobras, has earned jail time for private executives previously thought to be untouchable, as well as for politicians. And Ishii has taken them there, serving as arm candy to the likes of construction magnate Marcelo Odebrecht and ex-Worker’s Party treasurer João Vaccari Neto.

Although Japanese immigration has been part of Brazil for over a century — there are more than 1.5 million Brazilians of Japanese descent — identifying Ishii by his race has drawn few criticisms in a culture where a range of racial and ethnic descriptions are part of everyday language. Rather, Ishii has become so bombarded by photo requests with passersby that supervisors moved him away from transferring targets of investigation, lest he alert the targets of what is coming.

But he remains written into Carnival history, and the plastic masks of his face created for the festivities may appear on Brazilian streets for months to come.

About this year’s carnival, Rio historian Luiz Antonio Simas wrote, "The party in times of crisis is more necessary than ever. We don’t joke and celebrate because life is easy, we do this because life is hard. Without rest in happiness, nobody keeps it going.”