One day in the late 1960s, Cande Lowe was playing in the dirt yard at Newtowne Court, a public housing project in Cambridge, Mass., when she noticed three men walking over from the nearby Polaroid warehouses. They were carrying giant boxes.

Even as a child, Lowe knew that the Polaroid Corporation made instant cameras in the old factory buildings next to the project. The men walked up to her and set down their boxes. One man reached in and pulled out a brand new camera — a Polaroid Swinger. He gave it to Lowe.

They took the rest of the cameras down to the teachers in the Community Art Center, a quiet, well loved community institution in a basement of Newtowne Court. The Art Center, as it’s locally known, was founded in 1937 and originally housed at a Harvard University art museum before moving to Newtowne Court in 1942. It operated there for 52 years.

Newtowne Court, completed in 1938 under the Works Progress Administration, is one of the oldest housing projects in the nation. During the 1960s, the Kendall Square neighborhood was full of empty lots and low-rise factory buildings gradually falling out of use. The subway station was one of the least used in the entire system. On the Fourth of July, the residents of Newtowne Court could stand on the roofs of their buildings and see the fireworks over the Charles River.

Kids watch as two boys play a game of four square. Kids played double-dutch, basketball, stickball, and baseball; roller- skated, break danced, and had wheelie-popping competitions on their bikes in the yard at Newtowne Court.

Courtesy of the Community Art Center

When the children received Polaroid cameras in the 1960s, they learned how to capture their lives and neighborhood in photographs. And they never stopped: For half a century — through neighborhood changes and recessions, when arts budgets are often slashed — children growing up in and around Newtowne Court and the neighboring Washington Elms housing project have been taking photos. Their collected work documents life in an American public housing project as seen through the eyes of the children who lived there.

Paul Weinberg started his freshman year at Harvard University in 1965. He was a scholarship kid from Revere, Mass., where his mother raised him alone in a three-room apartment. He looked for a part-time job as soon as he started college.

“The jobs that were open to scholarship students at Harvard were working at the laundry, working at the cafeteria,” recounted Weinberg. “I had never seen a preppy before. I knew that I would not do well serving those kids. They just made it very plain, at that time, who belonged where.”

Weinberg got a job off-campus at the Art Center, along with fellow Harvard freshman Gene Mazel. The two young men started a photography club for middle-school-aged boys living in the projects. Most of the boys were short both fathers and money. Before long, though, they did have cameras.

“Paul was a progressive thinker,” says Sidney Brien, who was then a teacher at the Art Center. “He thought, ‘God, we’re across the street from the Polaroid Corporation. Here they are making all this money, making all this neat stuff. And we’re here, and we have hardly anything.’”

Brien suggested that Weinberg write a letter to Polaroid requesting cameras and film.

To Weinberg’s amazement, the letter worked. He remembers the terrifying experience of walking into the office of Polaroid’s executive vice president Stanford Calderwood for a meeting. “I’d never been anywhere near an executive office in my life,” Weinberg says. 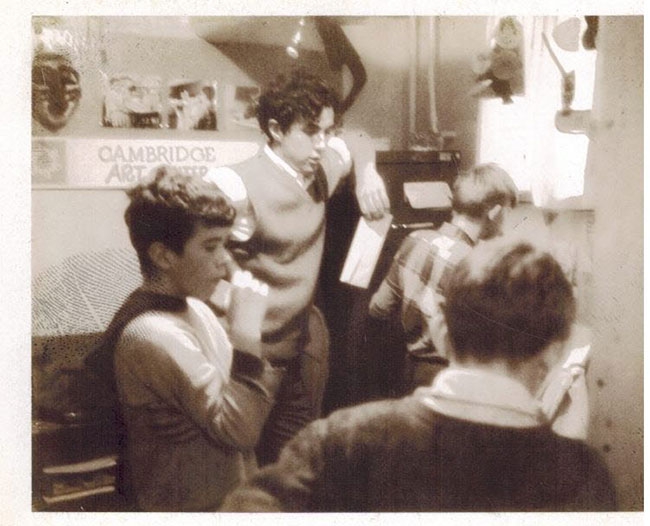 A Polaroid picture of Paul Weinberg in the basement of the Art Center at Newtowne Court, where he had a work-study job in college.

Calderwood was a large man and successful executive, known around Polaroid for making big decisions and giving big hugs.

The company surrounded Newtowne Court on three sides, operating in ten buildings. Polaroid inventor and CEO Edwin Land had a philosophy regarding the company’s relationship to its neighbors. His employees still remember it.

“We were to think of ourselves as guests of the community,” says former Polaroid speechwriter Harry L. Johnson. “We were not giving to the community, but giving back to the community. As in, they already gave something to us. It was a poor community, and we got the land for a cheap price. They were there first, and would probably outlast us.”

Calderwood promised to give the Art Center cameras, film, and even money to build a darkroom. That’s what Weinberg’s proudest of. After all, darkrooms, he says, are “the antithesis, if you think about it, of what Polaroid was all about.” Weinberg and Mazel built theirs themselves.

“That place saved my life,” says Clarence Bryan, who joined Weinberg’s photography club with other neighborhood boys. “We were a gang... a photography gang.” 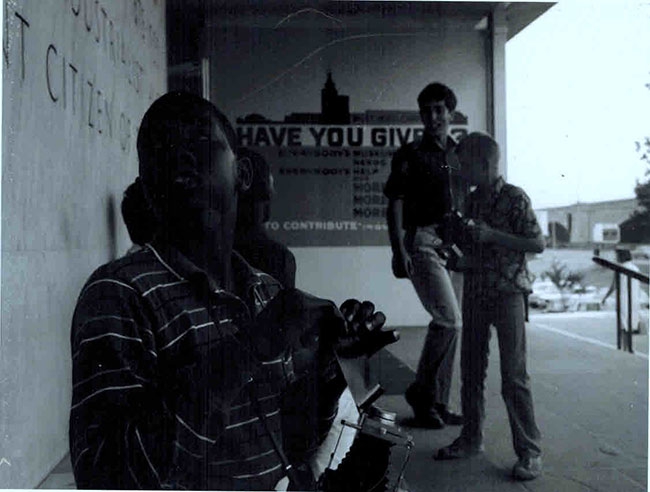 With their Polaroid cameras, the boys took pictures all over Boston, selling them to tourists and college kids for a dollar a piece. Weinberg used their earnings to organize field trips to places none of them had ever seen. Bryan still remembers cresting the sand dunes of Cape Cod for the first time, and driving to Times Square in New York City.

They exhibited their work, too. And famous photographers, who were guests of Polaroid, came to teach the boys an occasional class.

This photo of Forest Hills, Boston, was the first photograph that Art Center student Tyrone Bellitti ever sold.  “We had a show up at City Hall,” says Bellitti. “It was the first time I ever hung any of my work. And someone bought it for $75, and the light bulbs went off. I was like, ‘I can make money off of this?’” He grew up to become a professional photographer.

After four years of college, though, the young teachers moved on. The boys grew up. Weinberg was drafted into military service in Vietnam. Mazel died of leukemia at 27, just as he was developing his career as a photographer. Some of the boys also died young.

Like many other people from the neighborhood, Clarence Bryan went on to work for Polaroid. He started the Monday after he graduated from high school and stayed there until the company filed for bankruptcy in 2001. He continued taking photographs.

A monument in media

The Art Center moved to a sunny building across the street that the City of Cambridge bought from Polaroid in the 1990s when the company was on the decline. Today, the Center has archived thousands of photos and negatives, and hundreds of hours of video footage. The current children at the Art Center use this archive, a cabinet that stands as tall as a person, to examine the past and create new material. They have collectively built a monument to their neighborhood in media. The materials in the cabinet are not arranged by date, subject, or any other system. The only way to identify the people in the photos is to put them in front of someone who grew up in the neighborhood.

“That an arts program could be that consistent over the years, within the fraught space of public housing, seems remarkable to me,” says Dr. Amy Howard of the University of Richmond. She studies the role of public art in helping forge community ties, but had not heard of this program.

MIT Professor of City Planning Lawrence J. Vale, who has written three books on American public housing, notes that arts programs were common in the original 1940s projects, and that tenant-led arts programs emerged in the 1960s; but it is unusual for such programs to endure. Recently, he noted, arts programs associated with housing projects have been lost as projects are closed.

Kids play double dutch in the yard at Newtone Court. Tania Valverde, who grew up in the project and went to the Art Center with her siblings, remembers most people from the photo because they lived near her apartment. “Everybody played with everybody,” says Valverde. For years, her mom worked as the cook at the Art Center.

Courtesy of the Community Art Center

Eryn Johnson, the Art Center’s executive director, is keen on welcoming those who grew up in the neighborhood, decades ago, to come back and participate in the program. “Alums have been coming back to the Art Center to reconnect,” says Johnson, “and it’s an opportunity to connect our current students ... to a network of mentors.” Most recently, the Art Center has been inviting its students and neighbors to come and help put together a tile mosaic. “We’re using our photography as inspiration for the mosaic itself,” says Johnson.

Every time they host an event, the Art Center staff put old photos out on a table, waiting for a person from the neighborhood to come by and start talking. It works.