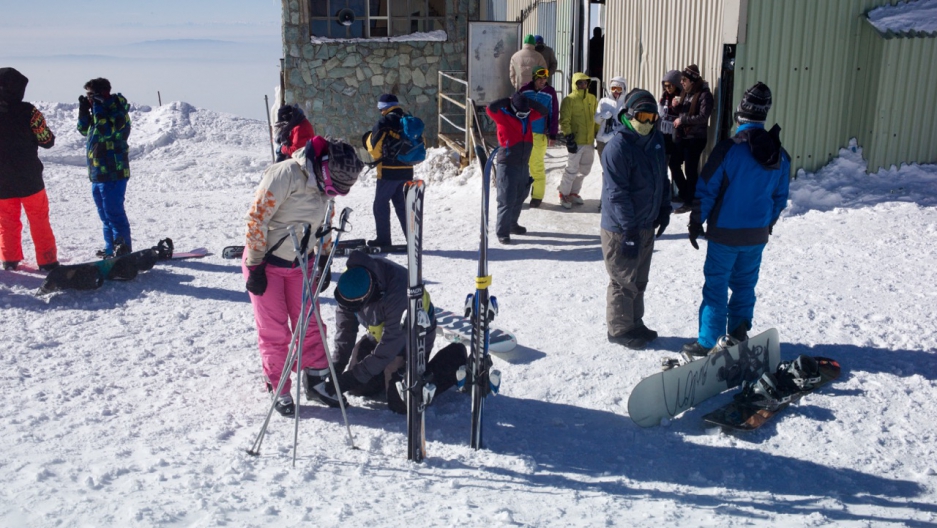 Skiiers at Tochal in Tehran.

If I were a downhill skiier, I had today planned perfectly. Up at 6, on the slopes by 9. I wasn’t skiing though. I wanted to meet the Tehranis who do ski.

Unfortunately, before I had a chance to get deep into this story, the security at Tochal ski center informed me that my press credentials were not sufficient to let me speak with people on the summit.

Heading to the Alborz mountains this morning outside #Tehran. Looks like some great weather. #tehranstories

Tochal rises steeply up the north side of Tehran. At 13,000 feet, it would be among the 100 highest peaks in the contiguous United States.

A cable-car shuttled me, producer/reporter Matthew Bell, and our government minder Mojgan over the gravelley south face of the Alborz Mountains. And once it passed through the second cable-car station halfway up, the snow covered the ground. Another 10 minutes later we were at the summit, freezing and windy. But the Tehranis who come to ski here are used to it, and on a day like today, with a bright blue sky, a Friday day-off for Muslims, it is perfect.

I’m told not a lot of people in Tehran go to Friday prayers. But they couldn’t have all been on the slopes today, despite those ideal conditions. At about $10 for a lift ticket, this is an activity that’s out of reach for many Iranians.

One guy I did get to speak with at the summit, Mohammed, was kitted out in a heavy cordura nylon parka and was ready to take his first run of the day. He said skiing “is not popular because it is an expensive sport.”

“Do you see more people coming out to ski though? Has that changed?”

Meanwhile, on the ski slopes north of #Tehran in the #Alborz mountains #tehranstories #Iran

“Now,” Mohammed told me, “it’s much better than five years ago. And younger people come out for skiing more than the older people.”

If you ski, you’d have been jealous how open these pristine slopes are. Some fresh powder, and no long lift lines.

“Maybe some day you can try the slopes out in the Rockies,” I said.

“I tried to get a visa to come to the US, but they wouldn’t give me,” he said smiling.

The freezing wind got to us pretty quickly, so we headed to the Tochal ski school lodge, a little stone shack practically buried in snow with barely enough room inside for a dozen people to stand. Most of the skiiers I saw came with their own gear fortunately, which meant the lodge was not crammed with bodies.

One of the skiers we met today at a ski area outside #Tehran seemed totally unfazed by the whipping wind and subzero temperatures.

A 20-something woman named Shadi in matching ski pants and jacket, wool hijab, and bright red lipstick came in the door with a gust of snowy powder trailing her. She took off her sunglasses and we started chatting about skiing in Iran and what it offers. But the ski coach there intervened. He asked our translator Mojgan what we were doing.

Then, he got on his two-way radio to security at the bottom of the mountain. “Stop recording,” he said. And stop interviewing Shadi or anyone else. We had press cards, we had the legitimacy of a government minder, and we also had the official foreign press handling agency contact the resort ahead of time about our visit. But for some reason, the security folks were less than satisfied. They told the ski coach we needed special permission to interview people at the top of the mountain.

No sense in pushing it. I got a nice little taste for what the sport offers in Iran. And this was just the closest slope to the capital. Another hour’s drive away from town, and you can get to a more posh resort where the real Iranian ski bums hang out.

Then again, I’m not really a downhill skier, and I had to get back down the mountain for another interview in Tehran.