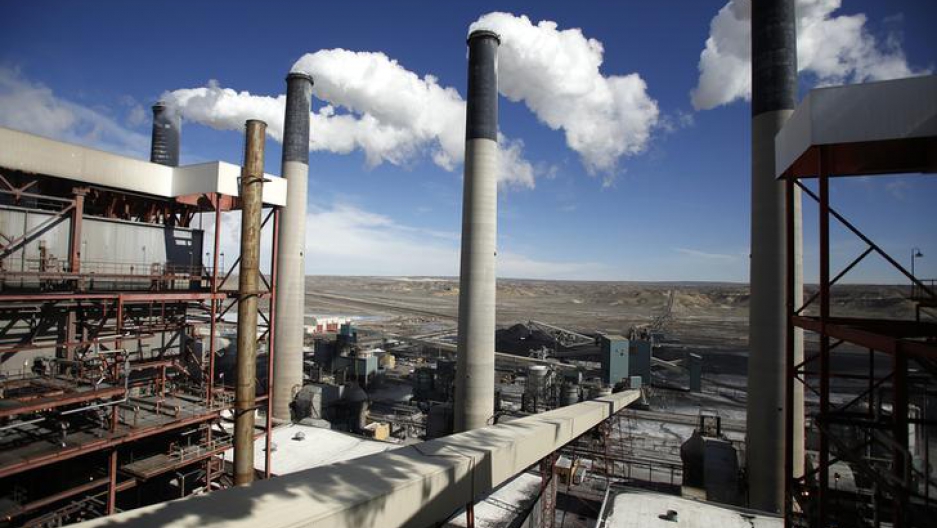 The Obama administraton's plan to clamp down on climate pollution from coal fired power plants like this one in Wyoming hit a potentially big speed bump at the Supreme Court this week.

That’s the message the Supreme Court sent to the president Tuesday night, when it pushed the pause button on his plan to scrub a huge amount of climate-warming pollution out of the country’s electric power system.

The decision is an unexpected victory for 27 states and a coalition of energy industry parties. They had challenged the Obama administration's plan to cut carbon pollution from power plants by more than 30 percent below their 2005 levels by the year 2030.

It may prove just a temporary speed bump for the plan. But if the decision foreshadows bigger trouble, one of the president's signature policy goals could go down in flames, with perhaps even bigger consequences for global cooperation on the climate crisis.

The Clean Power Plan was announced with great fanfare last summer. It put coal-fired power plants squarely in its cross-hairs as one of the biggest sources of climate pollution. It also kicked off political and legal battles over its impact and legitimacy. But supporters have since argued that it's on solid legal footing, based largely on other recent Supreme Court decisions.

Ten years ago, the court ruled in a landmark case that the EPA has the authority to regulate carbon dioxide under the 46-year-old Clean Air Act. The court later affirmed that the EPA can also regulate air pollutants that cross state boundaries.

These are key legal underpinnings of Obama's CPP, which is in turn a key part of the emissions-cutting commitments the US made at last December’s climate summit in Paris, at which the US and the rest of the world committed to taking much stronger action to address the climate crisis.

And those previous rulings are the main reason the court’s move to put the plan on hold is so surprising — it suggests a willingness by the court to rein in some of the leeway it’s given the EPA in recent years on climate and air pollution.

The procedural ruling specifically addresses a lower-court decision to allow the plan to stay in place while the legal challenge is being adjudicated.

Here's how it happened:

The challengers argue that the plan exceeds the EPA’s authority to dictate big changes in how states must handle their energy mix. They also argue the CPP isn't cost-effective because, they say, it would cost thousands of jobs in the coal industry and push up the price of electricity.

A federal court in Washington agreed to hear the case, but turned down a request to issue a stay on the plan pending a ruling, essentially rejecting the challengers’ argument that they would suffer irreparable harm in the meantime if the plan were eventually struck down. The administration argued that there would be no such harm because of the long timelines before the plan would actually go into effect.

The challengers appealed that decision to the Supreme Court, and Tuesday night the court issued a one-paragraph ruling in their favor, imposing a stay “pending disposition of the applicants’ petitions for review” — in other words, until the case is ultimately resolved.

The ruling by the court’s five conservative judges included no reasoning and was not a decision on the merits of the challengers’ case. But it was essentially a statement by a majority of the court that the challengers have at least a reasonable chance of succeeding. And reading the tea leaves suggests a wariness of the administration’s plan on the part of one key justice — frequent swing vote Anthony Kennedy.

Kennedy voted with the majority in those two earlier EPA rulings. But he has also been a frequent defender of states' rights arguments. This case pits the two interests against each other.

And it’s likely that Kennedy's will be the decisive vote, as it has been in so many important cases during his long tenure on the court.

For now, the DC Circuit Court of Appeals will hear arguments in the case in June, with a ruling expected by fall. Whatever the outcome, the losing side will almost certainly appeal to the Supreme Court, and given its ruling on the question of the stay, the justices are likely to accept the case for its 2016-17 term.

All of which means that this key piece of President Obama's efforts to beat back climate change almost certainly won’t take effect before he leaves office next January, and may be scuttled altogether, with possibly far-reaching global consequences.