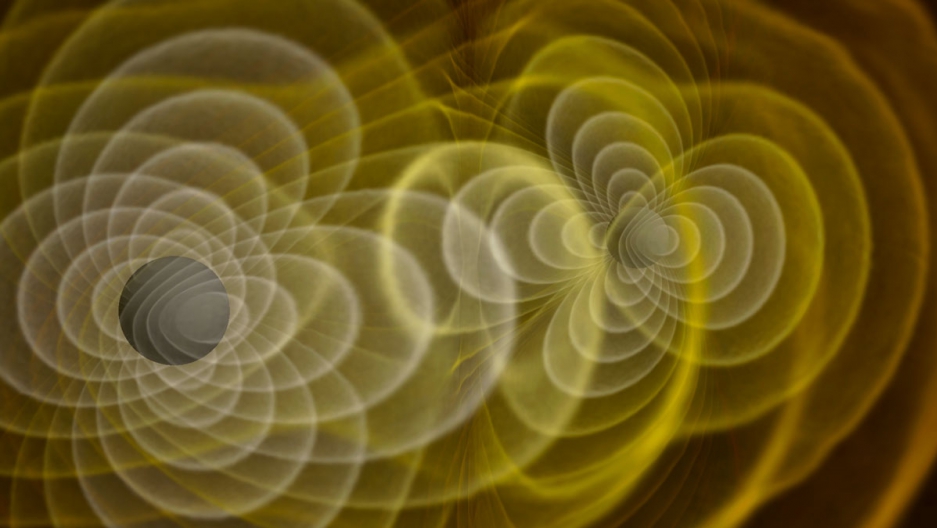 A frame from a simulation of the merger of two black holes and the resulting emission of gravitational radiation (colored fields, which represent a component of the curvature of space-time). The yellow areas near the black holes do not correspond to physical structures but generally indicate where the strong non-linear gravitational-field interactions are in play.

Gravity. You know it as what holds things together — it holds us to the Earth, holds the Earth in orbit around the sun. But what exactly is gravity?

More than 300 years ago, Isaac Newton said that any two objects that have mass are attracted to each other and held together by a force.

And that force is what Newton called gravity. He could calculate it, but he couldn’t explain where gravity came from.

And, says Priya Natarajan, an astrophysicist at Yale, that’s how things stayed for more than 200 years. Until Albert Einstein showed up.

Here’s where things get fun. I want you to close your eyes. Imagine a large rubber sheet, like a trampoline. Now drop a large metal ball onto it. The ball causes the sheet to bend beneath it, forming a dimple. The bigger the ball, the bigger the dimple.

OK, scale it up. Now the ball is the Sun, and it’s sitting not on a rubber sheet, but rather in a four-dimensional fabric — what Einstein called space-time.

He says that's how Einstein understood gravity — gravity is what happens when objects bend space-time.

Einstein saw it as one of the four fundamental forces of our universe — including electromagnetism and the two forces at work inside atoms.  But even though gravity is the force that is most obvious in our lives, it turns out that gravity is the weakest. So to see its effect, you need something dramatic — something that creates massive ripples in space-time, like waves moving out from a rock dropped in a pond. In fact, Einstein called these gravitational waves.

But while Einstein predicted gravitational waves, he never observed them. The tools just didn't exist. Until today.

This morning, a team of some 1,000 researchers from the US and around the world announced the first ever direct detection of gravitational waves.

"It's just exhilarating," says Gabriela Gonzalez, a physicist at Louisiana State University and a spokesperson for the project called LIGO (the Laser Interferometer Gravitational-Wave Observatory). "Here, we detected the space-time around us wobbling, getting distorted, compressed and stretched for a fraction of a second. There’s so much to learn now!"

And how these gravitational waves were detected is nothing short of incredible.

The LIGO team built two giant L-shaped detectors in Louisiana and Washington state. The arm of each L is two-and-a-half miles long.

"The arms of this L are these concrete bunkers," Evans says. (He's one of the researchers on the project.) "And under the concrete bunker, we have a tube so that we can suck all the air out — it’s a vacuum tube."

Evans and his team have tested equipment for the LIGO project in their lab at MIT. Before entering the facility, he runs his shoes through a machine that sucks off any dirt.

The lab is about the size of a basketball court, and a giant metal tube with a laser in it travels its length. A lot of what’s here and inside the real bunkers is meant to keep the apparatus absolutely still. You can't have any shaking because the lasers measure the precise lengths of those two-and-a-half mile arms. 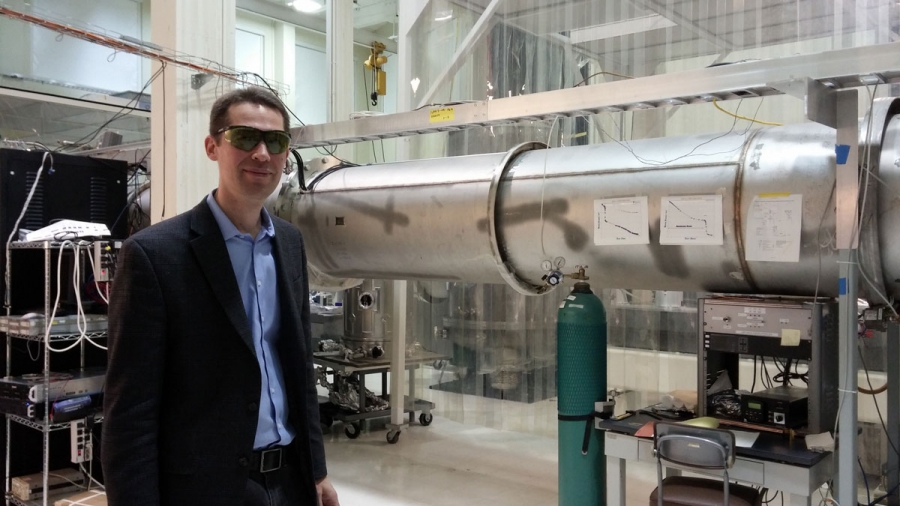 Physicist Matthew Evans at his lab at MIT in Cambridge, Massashusetts.

"So if there were no gravitational waves, they would have the same length," astrophysicist Priya Natarajan says. "But if it turns out, because of gravitational waves causing a jiggle, one of the arms is going to have a slightly different length than the other."

And that difference in length is really small.

"We are talking about a fraction of the diameter of a proton," Natarajan says. "It’s that tiny."

They’re trying to detect less than a proton difference across 2.5 miles — that’s why it’s so challenging.

"Yeah, it is kind of crazy — when it comes right down to it, it is sort of a crazy thing," Evans says.

And yet despite the crazy, Evans and his colleagues did it. The LIGO team used those L-shaped buildings to detect gravitational waves that were produced by a collision of two black holes more than a billion light years away. It's the first time we’ve observed this violent phenomenon in the universe — ever.

"It’s as if we had an enormous hearing aide, which let us pick up the sounds that the universe has been producing — we just have been deaf to these sounds up until now," Evans says.

In fact, you can actually convert a gravitational wave into a sound wave. This is the sound, sped up, of the two black holes spiraling toward each other until they collide.

The collision sent gravitational waves rippling outwards at the speed of light. More than a billion years later, they passed through the Earth and made the arms of the detectors in Louisiana and Washington change their lengths ever so slightly.

OK, this is all cool to think about — bending space-time, shooting lasers down vacuum tunnels, colliding black holes — but beyond proving Einstein right, what’s the big deal?

Natarajan says, "It’s like opening a new window into the universe."

You see, up until now, we’ve studied the stars and outer space using light or something related to it — radio waves, X-rays, microwaves.

"It reveals an entire new side to the cosmos," Natarajan adds.

For instance, we might now be able to directly observe black holes. Because while black holes don't emit light, they do emit gravitational waves.

"If you look at the universe just using gravitational waves, you’re likely to see all these jiggling black holes," Natarajan says.

And here’s the other reason this is a big deal.

"Because gravity waves are not obscured by anything, we can see right through to the edge of the universe," Natarajan says.

"I actually never imagined that in my lifetime that window would open," Natarajan says.

With that window now open, Natarajan says it may boost interest in another international collaboration — a joint NASA/European Space Agency project to look for different kinds of gravitational waves. All kinds of exciting possibilities lie ahead.

But let’s return to today. Because it’s not every day that we get to hear (literally) the universe confirm something we first conjured up on paper a hundred years ago.

"It is really hard not to be completely in awe of Einstein," Natarajan says. "Just to think that this theory came completely out of his pure thought."

Thursday we got new proof for that theory. It’s a day worth celebrating. And when the confetti falls — we now have a little better idea of why.