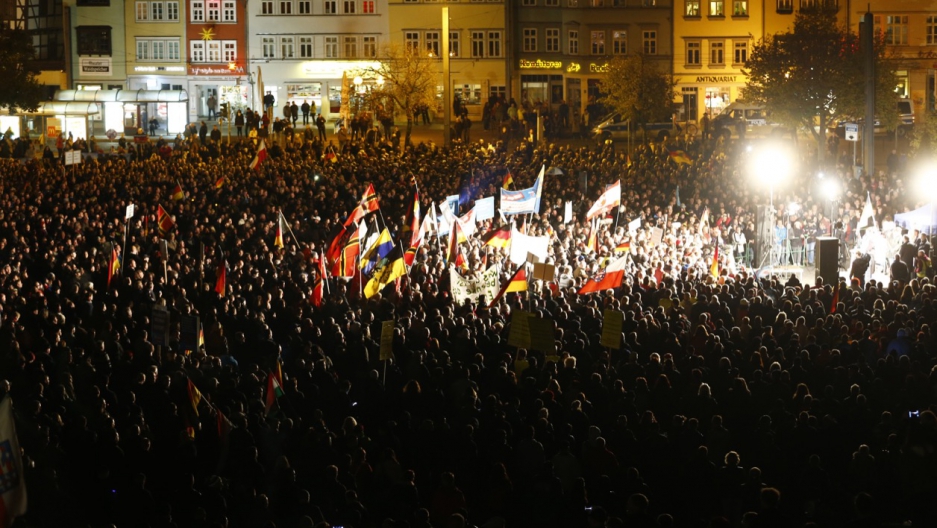 Supporters of the right-wing Alternative for Germany party demonstrate against the government's policy for migrants, in Erfurt, Germany Oct. 21, 2015.
Credit: Axel Schmidt
Share

MUNICH, Germany — Europe’s refugee crisis has boosted support across the continent for populist forces who cast newcomers as unwanted intruders. And despite its own dark history of xenophobia, Germany is no exception.

Once a eurosceptic party centered on economic issues, Alternative for Germany (AfD) has become the country’s third most popular political force, thanks to its aggressive anti-immigration rhetoric. Most recently, AfD leaders shocked moderates when they said they approved shooting refugees who attempt to illegally cross the border.

It was extreme even for some of the AfD’s own followers, but it captures just the kind of raw discontent the party is trying to harness as public frustration grows over the refugee crisis.

Today, polls find the overwhelming majority of the population believes the German government has lost control over the refugee situation — and analysts say AfD has been the primary beneficiary.

“The AfD is only the most visible symptom of an evolving social atmosphere,” the weekly newspaper Die Zeit wrote this week. “Not even the modern historical taboo can assert itself against this mood.”

Public opinion in Germany is turning against Chancellor Angela Merkel and her immigration policy, which has brought more than 1 million asylum-seekers to the country in the past year.

The mood has grown even worse since groups of men believed to be mostly from North Africa and the Middle East attacked scores of women in Cologne last month in a mass assault that shocked the country.

The next test for the AfD, which currently polls around 12 percent nationally, will be local elections next month in several German regions.

On one hand, the rise of a right-wing populist force is concerning for moderates in Germany, especially since the country has battled for years to overcome its historical demons from the Nazi era.

But on the other, experts say most support for the party isn’t based on deep ideological convictions. Rather, voters will opt for the AfD if the government doesn’t keep refugee numbers down.

“They haven’t delivered on this promise [to limit numbers] yet, and this is going to be the key defining question [for AfD] in upcoming months,” said Timo Lochocki, of the German Marshall Fund of the United States.

He added that recent polls show only one-third of AfD supporters actually agree with the party platform, while the remaining majority represent a protest vote against the political establishment.

Still, the party’s rapid growth is part of what some observers say is a broader split in political opinion that’s polarizing German society.

“Those from the pro-refugee camp are dismissed as naive dreamers. Those against the open-door policy are quickly branded right-wing radicals or Nazis,” wrote Alexander Kudascheff, editor-in-chief of German broadcaster Deutsche Welle.

“The political discourse has gone off the rails.”