Sanders supporter outside a polling station in Manchester, NH, on Tuesday, Feb. 9, 2016.

So why didn't you vote for Hillary Clinton?

Christine Seibert represented many New Hampshire women with this defense of her candidate, Bernie Sanders.

“He's been a feminist ... for a very long time,” she says. “And it's not even just that, he stands for the equality of all human rights: people of any race, any religion, sex."

A day after Sanders's big victory — in which he captured 55 percent of the female vote — even a Clinton supporter and feminist like Rutgers professor Charlotte Bunch was trying to figure it out.

Bunch, 71, who heads the Center for Women’s Global Leadership at Rutgers, says the excitement among feminists — across generations — to have Clinton in the White House may have faded since the 2008 run.

“It’s no longer unimaginable that there would be a woman president,” she says.

And because Clinton has been a household name in politics for a long time, Bunch thinks she might ironically be the victim of her — and other women’s — own political success.

“She is not the new face for many, feminists included, who feel like the political system needs to be shaken up around issues of inequality in particular,” she says.

That’s where Sanders has an allure that transcends ideologies — he won New Hampshire Democratic voters from moderate to very liberal, according to NBC exit polls.​

Where does Clinton go now? In New Hampshire, her feminist persona and work toward women’s equality wasn’t enough. 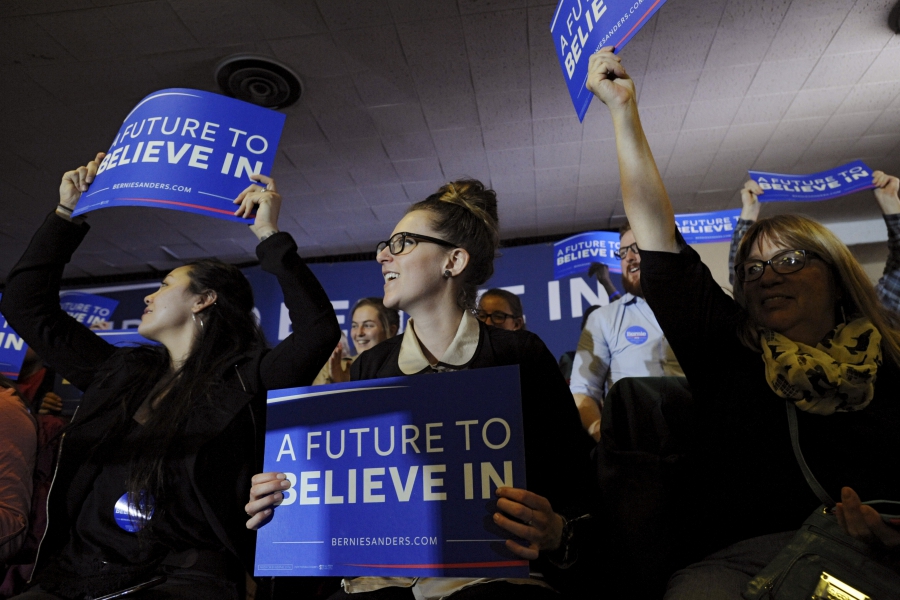 Supporters of US Democratic presidential candidate Bernie Sanders cheer ahead of his speech at a town hall campaign event in Clinton, Iowa.

Some women who’ve been campaigning for gender equality for decades feel like having Clinton in the White House, as commander in chief, is the fruit they’d like to see their labor bear. They want to see a woman govern the US in their lifetime.

And that sentiment may have been the driver for a statement by Madeleine Albright, the first female secretary of state, who said the real revolution would be to have a woman head of state. Activist Gloria Steinem piled on, with ill-received comments about young women supporting Sanders because they want to meet men.

President Barack Obama won in 2008 with more than 90 percent of the black vote. But Rutgers' Bunch says “we’re past the point where many people would vote [based] on group identity."

“Women making up half the population doesn’t mean you have the group identification that being a racial minority has,” she says. “Many African-Americans [in 2008] felt they would never see a black president.”

But because the prospect of a female president seems achievable to women today, Bunch says the focus is on policy. That’s reflected in statements from Sanders supporters across the country and on the Internet, where this meme is popular:

To Christine Seibert, who was campaigning in Manchester on the day of the primary, Sanders “believes in equality for everybody... and that's more important [than electing a female president]."