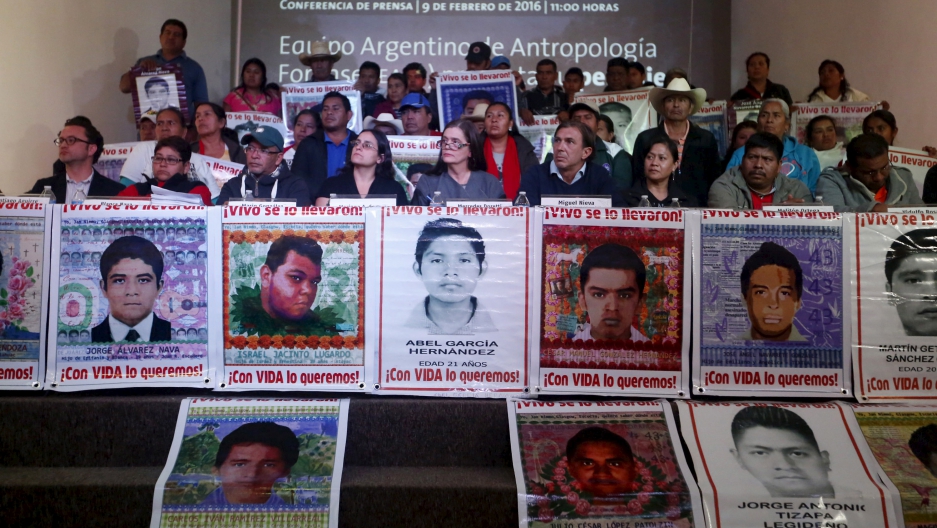 Members of the Argentine Team of Forensic Anthropology (EAAF), relatives of the 43 students missing from Ayotzinapa College Raul Isidro Burgos and representatives of human rights organizations take part in a news conference in Mexico City, February 9, 2016, to deliver a report on the investigation done by EAAF on the remains that were found at a garbage dump in Cocula, near Iguala.
Credit: Edgard Garrido
Share

On Sept. 26, 2014, 43 students went missing from the town of Iguala, in Mexico's Guerrero state. Now, the findings of a yearlong forensic investigation are raising doubts about the Mexican government's official version of what happened to them.

According to Mexican authorities, corrupt municipal police kidnapped the students, who were studying at a rural teachers' college in the nearby town of Ayotzniapa, and handed them off to local gang members. The gang murdered them and incinerated their bodies in a landfill.

A team of Argentine forensic experts investigated the supposed burn site and found no evidence that Mexico's version of events is true. They did find human bone and teeth fragments, but none, they say, were from the 43 students. And there was no evidence of a recent fire large enough to destroy 43 bodies.

"The multidisciplinary probe of biological and nonbiological evidence recovered in the Cocula landfill and the additional information gathered do not back up the hypothesis that there was a fire on the morning of September 27, 2014, of the required magnitude and duration that would've resulted in the massive incineration of the 43 missing students," the forensic team concluded.

Attorney General Arely Gomez Gonzalez said she will order a new investigation into the students' disappearance.

From petitions in the Supreme Court to hashtags and helicopters, women in India have been getting creative about their right to offer prayer at some temples that restrict their access.

On Jan. 26, India’s Republic Day, for example, as many as 1,000 women tried to storm a temple devoted to the Hindu god Shani in Shingnapur village, in the state of Maharashtra. Last year the shrine had to be specially “purified” after a woman breached security barriers and touched the prayer platform.

Those who want to keep temples men-only will soon have to prove why to India’s highest court. Judges are currently hearing a case filed against the Sabarimala temple authorities in 2006, arguing that restricting women's entry violates the rights to equality and freedom of religion set out in the Indian constitution.

It all comes down to whether barring women is judged an “essential practice" — a tradition essential to the practice of a religion, GlobalPost correspondent Nimisha Jaiswal reports.

China has been spending billions of dollars propping up its currency. Amounting to more than oil-rich Oman's economy is worth, according to the World Bank.

If that sounds odd to you — it should. China deliberately devalued its currency in August.

At the time, Beijing explained the devaluation by saying it wanted to allow the yuan price to reflect market forces. Analysts thought the decision was likely meant to make China's declining exports more appealing on the global market. Investors interpreted it as a sign that China's economy was much weaker than its leaders were letting on and dumped the currency to reduce their exposure.

Now, Beijing is burning through hundreds of billions of dollars in foreign currency in hopes of preventing the yuan's further devaluation.

GlobalPost's Allison Jackson explains why this latest move could go down as another example of Chinese policymakers failing to anticipate the market's reactions, and paying the price.