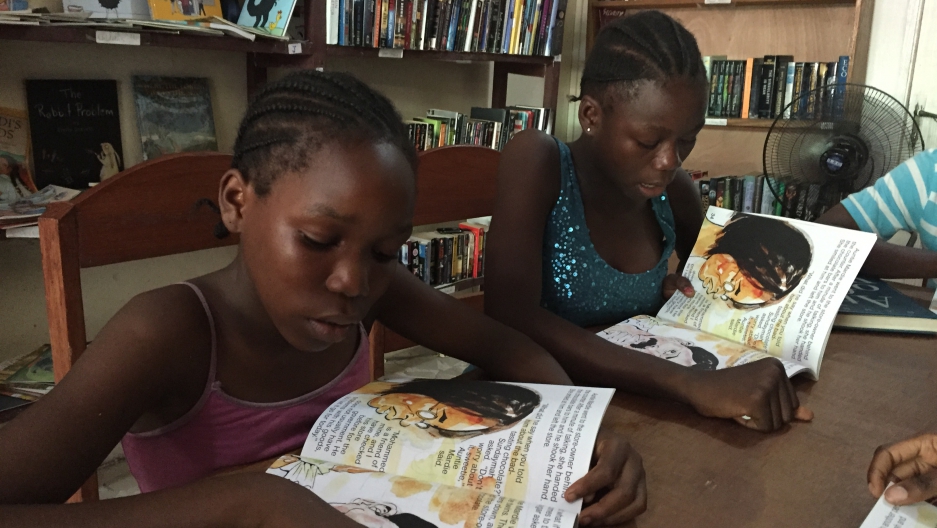 Liberian children read Gbagba at One Moore Book in Monrovia.

“Gbagba” means “trickery” or “cheating” in the Bassa language spoken by hundreds of thousands of people in the West African country of Liberia. It’s also come to mean “corruption.”

Everyday graft and bribe-taking can make it hard to avoid getting cynical — especially in a place still recovering from civil war and the Ebola epidemic. But Liberian author and academic Robtel Neajai Pailey has turned to the least cynical group to take a look at corruption: children.

So when the new publishing outfit One Moore Book approached Pailey to write a book specifically for Liberian children, she knew it needed to be called “Gbagba.”

More from PRI: Once a refugee, she's opened one of Liberia's few bookstores, where children can read about themselves

In Pailey’s book, 8-year-old twins Sundaymah and Sundaygar travel from their home in the Liberian port city of Buchanan to the capital Monrovia to visit their aunt and uncle.

They’re apprehensive and excited about the trip, curious about all the new things and people they see. But along the way they witness confusing scenes that test their inner sense of right and wrong, such as bribes to police officers to get through traffic.

The children are based on Pailey’s own niece and nephew.

“They’re incredibly precocious — they don’t take ‘no’ for an answer,” she says. "These kids are children who interrogate corruption in many ways.”

Pailey has done readings of “Gbagba” throughout Monrovia, and before she starts the story, she asks children: “Have you seen gbagba in your communities? Or in your school, your church or mosque?”

Invariably kids understand the question and begin to talk about what they’ve seen, which Pailey finds a little “frightening,” but also encouraging.

“If children begin to identify these acts as corrupt practices,” she says, "then hopefully — my goal is that they can subvert that in their adulthood.”

But she admits this conversation can get tense for the adults in the room. On a practical level, it can be impossible to avoid a bribe here and there in Liberian society. Pailey says gbagba is "a facet of everyday interactions, unfortunately. It happens in every single sector of Liberia.”

Pailey would like to write more books for children, both about rich cultural traditions in her native West Africa, but also more stories about ethics.

But for now, she’s helping to prolong the conversation started by “Gbagba" through other means. With funds from the Open Society Initiative for West Africa, Pailey and her publisher commissioned a song and video version of “Gbagba.”

One listen to Liberia’s top hipco artist Takun J repeating the chorus “say 'no' to corruption — you’ll be all right,” and it’s hard to get the mantra out of your head. Which is the point.

“People are dancing along to the song,” Pailey says, “but also having that national conversation about how corruption affects us negatively — politically and socially.”