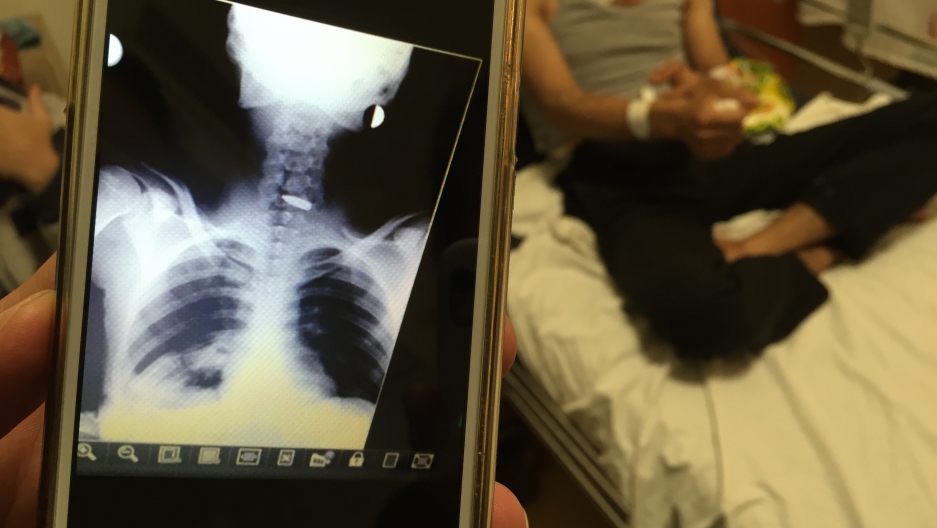 A fighter recovers in a Turkish hospital near the border with Syria. A bullet remains lodged in his neck.
Credit: Richard Hall
Share

KILIS, Turkey — On the first floor the Kilis hospital, just a few minutes from the Syrian border, a bleary-eyed teen flicks through photographs of destroyed buildings and twisted bodies on his phone.

“This is my village. It is completely destroyed,” says Abu Diab. He fled his home near the town of Menagh two days ago in the face of intensive Russian airstrikes. “This girl was hit by the Russians,” he adds, revealing a picture of a young girl with a bloodied face.

His 21-year-old brother Muhammad lies in a hospital bed just yards away. The bones in both of his hands were crushed in a rocket attack that destroyed their home.

The hospital's halls are packed with people from all along the stretch of land between the Syrian city of Aleppo to the Turkish border. That area has become a corridor of death in recent days, sending tens of thousands fleeing for their lives.

Residents from Tal Rifaat, Menagh, Aleppo and a host of villages on the road to Turkey recount similar scenes: relentless bombing from the air and advancing ground forces from the east, south and west, as the Syrian army and its foreign allies look to crush the rebel bastion in the north and win back control of the country’s largest city.

More than 500 people have been killed since the Russian-backed offensive on Aleppo began this month, according to the Britain-based Syrian Observatory for Human Rights, which uses a network of sources on the ground in Syria. Among that number are 89 civilians. Many more now fill hospital wards in Turkey.

The Russian government has denied killing civilians in Syria, insisting that it's only targeting terror groups there.

More from GlobalPost: Civilians fleeing a Syrian government offensive have nowhere to hide

“For every house in our village there were three bombs,” says Ahmad, Muhammad’s uncle. “Only civilians are dying in our village.”

Those who could fit in an ambulance with Muhammad were able to cross into Turkey, but around 50,000 people fleeing the same offensive have amassed on the Syrian side of the border, and the gates remain closed. Most of Muhammad’s family is stranded in Azaz, in northern Syria, where camps have been set up to deal with the new wave of refugees. They don't know when they'll see each other again, but they're sure there is little hope of returning home.

A few doors down the hall, Youssef half-squats on the floor, leaning his back against the wall. His 45-year-old father is lying in a hospital bed in the room next him. They came to Turkey Tuesday from Tal Rifaat — a rebel-held town north of Aleppo that is now firmly in the sights of the Syrian army.

“It’s terrible. My father’s leg is broken in two places,” he says. “From 1 a.m. yesterday until now there have been around 20 airstrikes. Every bomb lands meters apart.”

Scattered all throughout the hospital, the sight of young men — some of whom are still dressed in military fatigues — points to the battle that is still going on in the south.

Muhammad finds it difficult to move with a neck brace on, and he struggles to sit up in his bed. There is a mark on his cheek where a bullet entered. The men sitting next to his bed pull up X-ray images that show the cartridge still lodged in his neck.

“It was the Iranians who shot me,” Muhammad says. “Ninety percent of the Syrian army is now foreigners.”

He says he’s a “normal fighter; not with ISIS or Al Qaeda” — just a combatant trying to topple President Bashar al-Assad.

Muhammad was stationed near Marea, a town to the northeast of Tal Rifaat, between Aleppo and the border. He speaks of a large-scale offensive backed by brutally effective Russian airstrikes.

“They are trying to take any village that is weak,” he says.

Among fighters and civilians alike, there is a sense of dejection in the face of this latest offensive.

Civilians who fled rebel-held territory between the border and Aleppo fear they may never go back. If the Syrian army is successful in recapturing it, they say they would face reprisals: disappearing into a prison or even death.

President Assad and his allies are close to cutting off control of Aleppo, an important and early gain by rebel forces fighting to remove him from power. If they succeed, residents there face the prospect of a long siege, possibly even starvation.

The West has long viewed the rebels of northern Syria as the only viable alternative to Assad, backing them with weapons and support to achieve their aim. For them, there is also a sense of betrayal. A common refrain among fighters is that “we defeated the Syrian army a long time ago, now we are fighting the Iranians, Hezbollah and Russia.”

While Assad could rely on his allies' fulsome support, the rebels say they were outmatched and under-supported from the beginning. This weak backing, in addition to crippling disunity among the many different rebel forces, led to the bleeding of Western-friendly rebel groups, to the benefit of more extremist groups with access to better funding channels. As the rebel movement transformed, so did America’s willingness to help it succeed.

Speaking on Tuesday, US Secretary of State John Kerry appeared to recognize the seriousness of the situation.

“We are not blind to what is happening. We are all very, very aware of how critical this moment is.”

The onset of the offensive put an end to peace talks that were scheduled to begin in Geneva last week. Opposition representatives said the push on Aleppo showed the government was not serious about peace, and was merely using talks as a cover to gain more territory. Talks are slated to resume on Feb. 25, but Assad now finds himself in a much stronger position.

Hassan Hassan, nonresident fellow at the Tahrir Institute for Middle East Policy and author of “ISIS: Inside the Army of Terror,” says the rebels “are facing unprecedented challenges.”

“They have an issue of retaining fighters who are sick and tired of the divisions while the Russians and the regime are wiping out the rebels and areas controlled by them. They are also finding it hard to cope with the airstrikes and struggling to unite against the increasing number of foreign Shia militias being deployed near their strongholds, especially in northern and central Syria,” Hassan said. “Unless they somehow deal with these challenges, and receive increased guidance and aid from their regional allies, the regime will continue to advance.”

If the regime does continue to make gains in the north, the Syrian battlefield may transform into something that Assad and his allies have always insisted it was; with the moderate rebels weakened to the point of irrelevance, all that will remain is a choice between Assad and the Islamic State. Many see it as a choice that has already been made by the international community.

“The revolution will not recover,” says Abu Diab. “The world has forgotten us.”