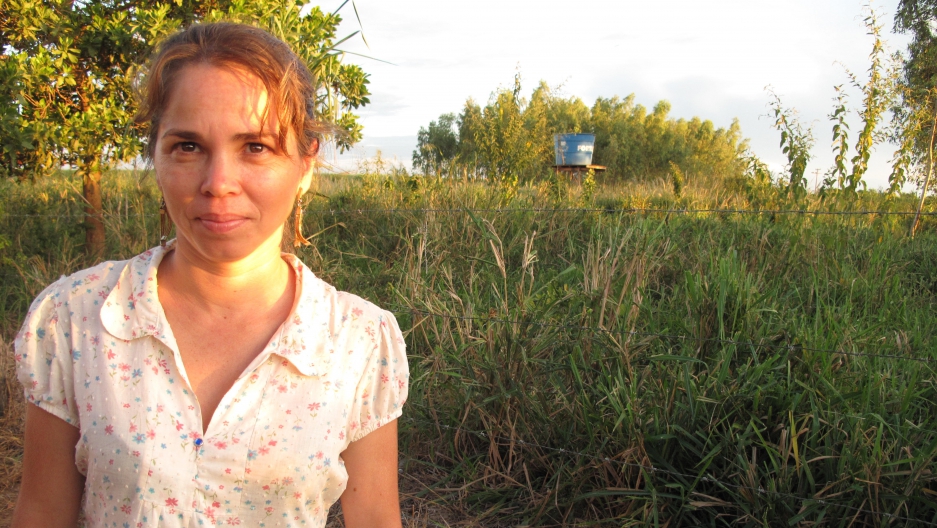 Joise Lopes, a farmer, says selling her produce directly to school meals programs has made a big difference in her income. “Oh God, this money is so good and it came at the right time,” she says.

Two women walk between rows of pumpkin plants in the outskirts of Promissão, a small agricultural town about 300 miles north of São Paulo. One of them, Donna Marinova, who is in her 50s, owns this farm. Her companion is Joise Lopes, 38. Together, the two women run a farmers’ cooperative in this farming community.

A few brown cows graze in the fields nearby as Lopes and Marinova head towards a cluster of tall, woody cassava plants. They stop by a couple of taller plants, bend down and pull out the roots with their bare hands.

“This is manioc,” says Lopes, holding out the tubers in her hands. They are brown, covered in dirt, except for the bright white flesh where they were torn from the roots. These women will sell the tubers to local public schools to be used in school meals. Public schools have become a regular source of income for the 20 or so farmers in their cooperative.

Donna Marinova (l) and Joise Lopes used to rely on middle-men to sell their manioc. Now their farming cooperative can deal directly with schools.

In the past, they had to depend heavily on middle men to sell their produce.

“We had to accept whatever they offered, or we would lose everything,” Lopes says.

But for the past three years, she says farmers like her have been able to bid directly with the city government to supply local schools. It's been a big help, Lopes says.

“There were times we didn’t have anything, and suddenly a little bit of money came in from the school meals program and I’d say “Oh, God, this money is so good and it came at the right time,” she says.

In the city of São Paulo alone, 900,000 students are fed every day through the school meal program, says Danuta Chmielewska, an education official in Sao Paulo city who works on the city’s school feeding program. “We serve around two million meals per day. If you think about how [much] food we need to buy to provide the food, it is a huge market.”

The market has been traditionally dominated by big food companies and middle men who buy produce from small farmers at negligible prices and sell for higher profits. Until recently, family farmers like Lopes and Marinova didn’t have access.

“It’s not just payment,” Chmielewska says. “Many times, the farmers are not seen, like invisible people. They work hard, every day, from Monday to Monday, and many times they are not recognized.”

Brazil is better known for its big industrial farms, which grow sugarcane, coffee, oranges, and soy, all for exporting. It’s a top exporter for some of these commodities. And yet, most of the food Brazilians eat is grown by family farmers. But most of them are poor and uneducated and struggle to compete with bigger, industrial farms and food companies. Many farmers have given up, moving to cities in search of jobs and a better life.

That’s why in 2009, the government passed a law requiring cities to spend at least 30 percent of their school meal budget on produce from family farmers. The law was based on the older Public Acquisition Program, which allows small farmers to sell a part of their produce directly to local governments.

“The idea that we have now, is a way to buy directly from family farmers,” Chmielewska says, so that a section of the market is reserved just for them. This has helped local family farmers, she says, while also improving the quality of school meals.

“In 2013, for the first time we bought rice from family farmers, and even better, we bought organic rice for the whole school feeding program,” she says. The city continues to use organic rice for school meals even though it is 30 percent more expensive than regular rice. But the “law allows a higher price for better quality.”

The program has become an example for other developing countries that are also trying to boost local agriculture while providing food and nutrition security to students in poor communities.

However, implementing the law hasn’t been easy, admits Chmielewska. “For example, here in São Paulo, the first purchase from a family farmer was in 2012,” she says, three years after the law was passed. There aren’t enough farmers near São Paulo city to meet the demands of the city’s schools, she says, and it has taken time and effort to reach out to farmers living farther away.

Many cities still don’t buy the minimum required from family farmers. Corruption and lack of political will can get in the way. Big food companies and big farmers, sometimes called the “meals mafia” here, bribe their way into winning the bids.

Some of the farmers are just too poor to participate in the program, says Bernardo Mançano Fernandes, an expert on agrarian reform and rural development at the State University of São Paulo. “Today, to produce you need technology. These people don’t have capital, [and] don’t have money.” Families who are slightly better off have been able to take advantage of the program, he says.

Back in Promissão, Lopes has just returned to her three-bedroom house after an hour washing, cutting and packaging pieces of cassava at her small vacuum packaging plant next door. She is eager to show me her house, which she recently finished expanding. The wrap-around porch is new, she tells me, the floor still wet with fresh cement. Inside, the walls look newly painted.

The extra money she has been making by selling to local schools has gone into home improvements, Lopes says. “I added a new room for my son, an attached bathroom for my bedroom, and I finished the kitchen,” she says.

Managing the cooperative and supplying public schools has also taught her new skills.

“It has taught me how to work with the producers, and have a way of talking to them,” she says. She also had to learn how to handle documents and deal with bureaucracy. “It has inserted me to into public power,” she adds, looking proud. “I am a member of the rural municipal council because of my cooperative. I learned how to have a dialogue with people in power."

That afternoon, I visit her at work in her sister’s home up the road from her house. The entire family is busy, preparing for a delivery to schools. They line up big, green crates on the porch and label each one with the name of a school and the order.

Lopes, in shorts and a cotton top, is clearly in charge. Holding papers that have the details of this week’s orders, she reminds family members what they need to supply and who will bring what.

“One school wants five kilos of eggplants,” she says, and the family will supply them.

When the crates are filled, a rented truck will deliver them to schools. The cooperative will soon get their own delivery truck with a government grant Lopes applied for, which means higher profits.

It takes a lot of organization and financial planning, Lopes says. But she loves every bit of it.

“People make fun of me,” she says. “But I like to go after a project, deliver it, and go to the meetings. This is what I like to do.”

“You’re a successful businesswoman,” I say.

Related: What does Brazil feed its school kids?