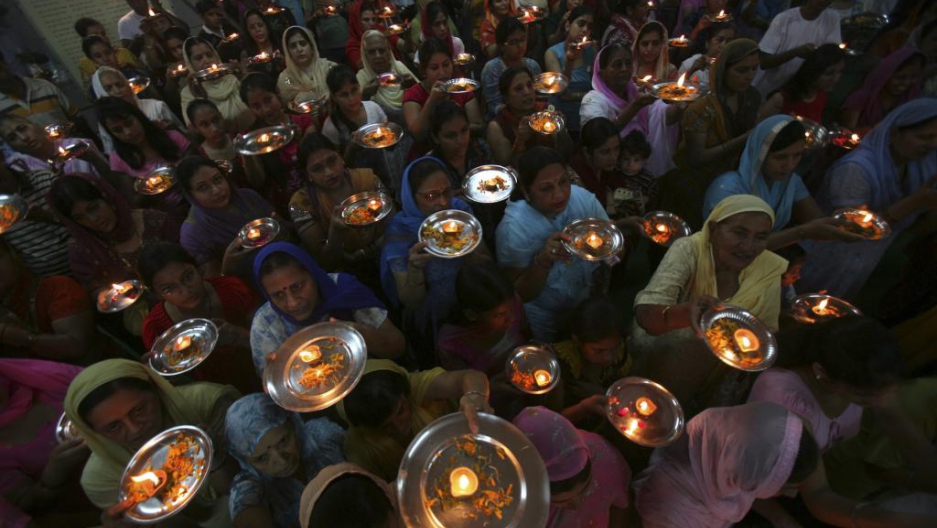 Hindu devotees pray inside a temple in the northern Indian city of Chandigarh, Oct. 8, 2010.

From petitions in the Supreme Court to hashtags and helicopters, women have been getting creative about expressing their right to offer prayer at some of India’s temples that restrict the entry of women.

Last month, one group made the unusual decision attempt to worship by force. On Jan. 26, India’s Republic Day, as many as 1,000 women tried to storm a temple devoted to the Hindu god Shani in Shingnapur village, in the state of Maharashtra, where women are not allowed in the inner sanctum. Last year the shrine had to be specially “purified” after a woman breached security barriers and touched the prayer platform.

“How can a god become impure when a woman touches him, how does that work?” asked Sheela Kumar, a member of a local women’s rights group, the Bhumata Brigade.

Men are not allowed to enter the inner sanctum either, according to temple authorities — unless they make a generous donation. Yet when the leader of the Bhumata Brigade, Trupti Desai, offered the amount required to gain access, she was denied.

Since then, Desai and her followers have been attempting to enter the shrine by force: once last December, then again last month. Both times, police detained the protesters. The second time, counter-protesters formed a human chain around the shrine to block them. Desai had booked a helicopter to land in the temple from above if she was refused access, but in the end she couldn’t obtain permission and officers stopped the demonstrators before they came within 40 miles of the shrine.

Another Hindu temple, Sabarimala in Kerala, is under fire for similar reasons. The holy site does not allow women between the ages of 10 and 50 to enter. Last November, the chief of the temple board said that rule would only be revised if a machine could be invented to detect if it was the “right time” for a woman to enter the temple — i.e., to check that she wasn't having her period.

He was referring to a Hindu custom that holds in all temples: Women who are menstruating cannot enter because they are considered “impure.” Even now, some women are discouraged from approaching their temples at home or even entering the kitchen while menstruating.

The temple chief’s comments led 20-year-old student Nikita Azad to start a #HappyToBleed campaign on social media. Girls posted pictures of themselves holding placards or sanitary napkins and encouraging conversation about the taboo subject of menstruation.

The first pic I posted when the campaign started. #happytobleed pic.twitter.com/ZpJfUTAhNE

“My parents have taught me how God created men and women as equals, how all humans are children of God. Your statement has left me dumbstruck, by breaking every belief I had in God,” wrote Azad in an open letter to the temple board. “Your statement will not install purity checking machines, rather let women put up a fight against such retrogressive, barbaric and misogynist customs.”

Supporters of these traditions have asserted that it isn’t only about menstruation. The deity at Sabarimala was celibate, priests say, which is why the presence of women in his sanctum is unacceptable. Women are not supposed to touch idols of the Hindu god Hanuman for the same reason.

Critics dismiss these explanations as so many “stories.”

“They are just making up stories as per their convenience,” said the Bhumata Brigade’s Kumar. “These men who are trying to oppose [women’s entry], they themselves do not know the reason why.”

Those who want to keep temples men-only will soon have to prove why to India’s highest court. A group of lawyers sued the Sabarimala temple authorities in 2006, arguing that restricting entry violates the rights to equality and freedom of religion set out in the Indian constitution.

Judges are currently hearing the case. They commented in January: “The temple cannot prohibit entry, except on the basis of religion.”

It comes down to whether barring women is judged an “essential practice” — a tradition central to following a religion — explains Alok Prasanna Kumar, a senior researcher at the Vidhi Center for Legal Policy, a think-tank in Delhi.

“An essential religious practice is beyond the scope of the government’s intervention, although the government may restrict religious rights in the interest of social reform or public interest,” he said. “If it supercedes individual rights is an open question.”

But since the state government partially funds the Sabarimala temple, Prasanna Kumar said, it is ultimately responsible for ensuring equal access for all.

“At the end of the day, the age restriction is based on notions of pollution. Would that religious notion of pollution not come close to barring people on the basis of untouchability?” he said, referring to discrimination along caste lines, which is illegal.

Access is not only a question for India’s Hindus. In the past two weeks, women have also started protesting outside the famous Haji Ali Dargah in Mumbai, a mosque dedicated to a male Muslim saint whose tomb is off-limits to women. A petition to end the ban is currently pending before the Bombay High Court, which has stated that it will wait to hear the Supreme Court’s ruling on the Sabarimala case before making a decision.

While activists await the verdict, the fact that India is even having this debate is progress, according to Sheela Kumar.

“There was a fear, and even though women wanted to talk about [temple entry] they could not,” she said. “In the recent movement however, people are getting to see that when somebody wants to fight for their rights, they can do it.”

This story was crossposted from our colleagues at GlobalPost.