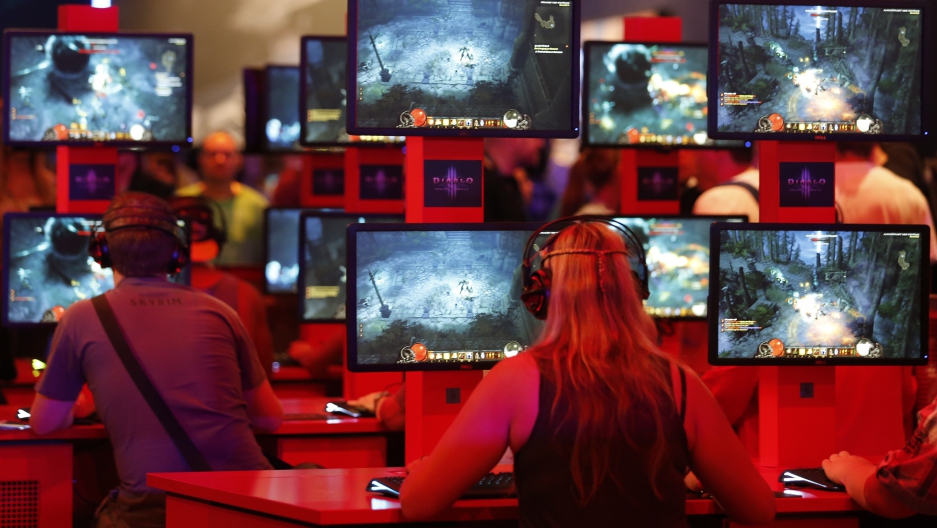 Visitors play "Diablo" at the Blizzard exhibition stand during the Gamescom 2013 fair in Cologne August 23, 2013.

For the second year in a row, in 2015 the US video game industry brought in more than $13 billion in sales, thanks in part to mostly violent and testosterone-driven games.

While shooting, sport, and fantasy games dominated the top 10 list this year, the University of Southern California is proving that gaming isn't an all-boys club.

The school's game design program is bucking an industry trend: Women now outnumber men at both the graduate and undergraduate level. And they are enrolled not just because they love games, but because they hope to change the culture and demographics of gaming.

In the decade since since it began, Tracy Fullerton, a professor and the director of the USC Games program, has worked hard to make the once predominantly male-driven program more inclusive.

“If you look back to the earliest days of games, they were marketed to the entire family,” she says. “There really wasn’t a distinction — there wasn’t any sense that there was one segment of the market that was going to like computer games more than another. This notion that we have that games are only for young men really evolved to try to capitalize on a particular segment of the market.”

Fullerton says the university has worked hard to ensure that gender parity was front and center since the USC program began.

“We wanted to train creative thought leaders, not just people who were going to go into the industry and get a job and be what I call ‘Butts in Seats,’ but to really think about the future of the entertainment industry and how interactivity and play fit into it,” she says. “We knew we had to change the culture in order to do that.”

One way to change the culture of the industry was to diversify production teams and foster a climate of inclusion, Fullerton says.

“It was something that we worked very hard to build, and I’m really gratified to see so many talented young women coming to our program to participate in that kind of environment,” she says.

Though Fullerton can appreciate adrenaline-packed shooting games (she’s a big fan of Halo), she’s also looking to be an innovative voice within the gaming world. And she’s doing that with one of her projects, entitled Walden, The Game.

“I started working on Walden about eight years ago, and the core idea of this is that you play Henry David Thoreau, and you sort of follow in his footsteps,” she says.

Fullerton says that the difficulty in creating this first-person game, which is a simulation of Thoreau’s life during his experiment in self-reliant living at Walden Pond, was translating the philosophy of the text with the feeling of being there.

Here’s how it was done, according to the game website: “The game begins in the summer of 1845 when Thoreau moved to the Pond and built his cabin there. Players follow in his footsteps, surviving in the woods by finding food and fuel and maintaining their shelter and clothing. At the same time, players are surrounded by the beauty of the woods and the pond, which hold a promise of a sublime life beyond these basic needs.”

The concept, Fullerton says, provides a way to reach new people and bring them into the gaming experience.