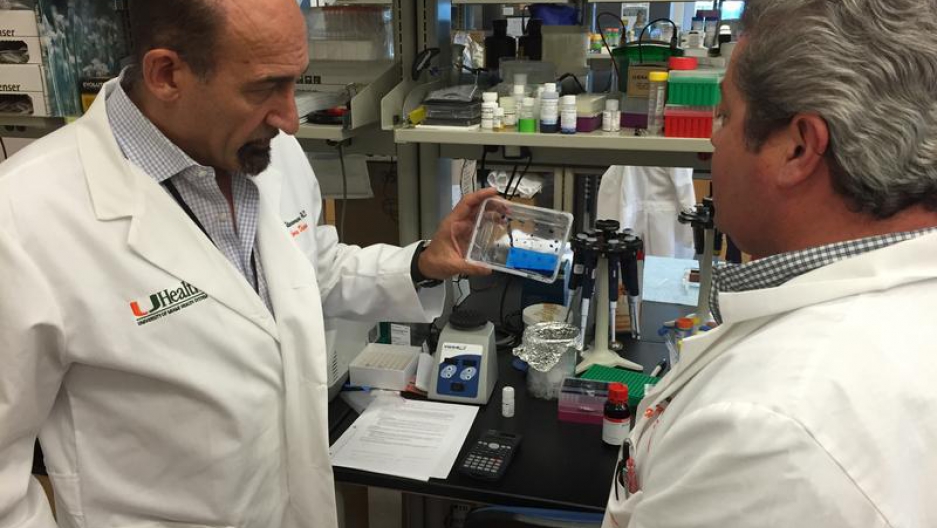 The need to develop a test for the Zika virus is urgent.

The World Health Organization has declared the mosquito-borne disease that’s spreading throughout Latin America and the Caribbean a global health emergency. Pregnant women in Brazil and elsewhere are increasingly worried about the possible link between the Zika virus and birth defects including the severe condition known as microcephaly. The virus may also cause temporary but potentially fatal paralysis as well as other less acute health problems.

“It’s as urgent as you can get,” says Dr. Mario Stevenson, who heads the infectious diseases division at the University of Miami's School of Medicine. Stevenson’s team has been working to develop a Zika diagnostic test, but it’s a formidable challenge.

“Unfortunately, the prevalence of other mosquito-borne diseases in places like Brazil makes a diagnostic test a complex matter,” Stevenson says. “The areas that Zika is circulating right now are also populated by other viruses that have strong similarity to Zika, including dengue (fever). So the tests that scientists come up with are going to have to distinguish [between] these very similar pathogens.”

The good news is that Stevenson and his colleagues have made progress in coming up with an initial diagnostic tool that's apparently capable of distinguishing the genetic profile of Zika from other pathogens, at least in the early stages of infection.

The bad news is that the test is expensive and still so complicated to administer that its availability in Brazil is extremely limited.

So is its efficacy, because of the way Zika works in the body.

The virus shows up in the blood of an infected person for “probably a couple of months,” Stevenson says. “That’s when (our test) would find it, because the test looks directly for nucleic acids which manifest the presence of the virus. But if someone was infected four to five months ago, the virus wouldn’t be in their blood and then you’d have to go to a second type of test, an antibody based test, because the antibodies against the virus circulate for a very long period of time.”

But Stevenson says no such antibody test yet exists, and he says scientists have their work cut out for them in designing one “because the antibodies that our bodies make to fight Zika probably cross-react against dengue. (So) we need an antibody test that will distinguish between the viruses.”

“Scientists are creative individuals,” he says. “They’re going to figure it out. But it’s going to take more time.”

Stevenson welcomes President Obama’s call for $1.8 billion in emergency funds to deal with Zika. He says the money could speed development of affordable tests and hopefully a vaccine.

He urges Congress to approve the funding, saying the US needs to mobilize funding quickly in order to “hit Zika hard and hit early.”