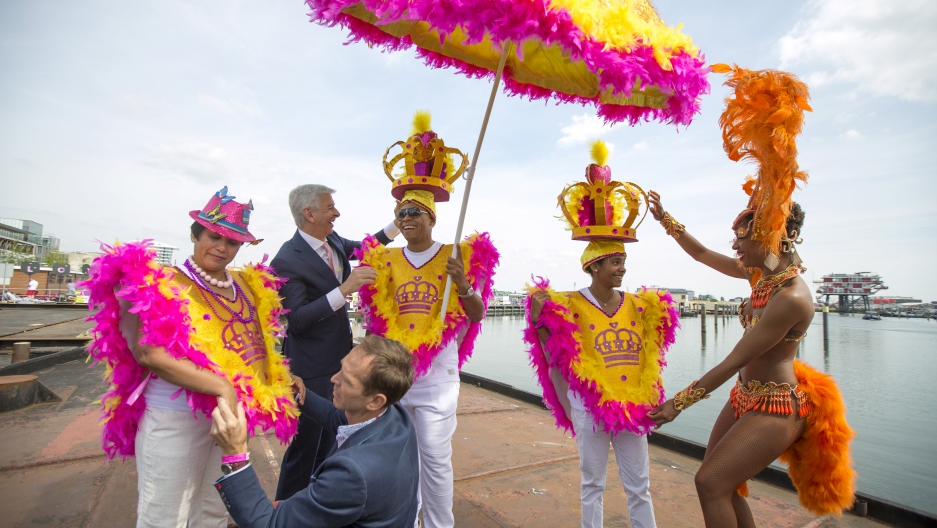 The Netherlands' Minister of Kingdom Relations Ronald Plasterk (2nd L, top) helps adjust costumes of participants from Curaçao before their boat leaves for the festival's canal parade in Amsterdam, the Netherlands August 1, 2015.

A lot of people wager money on elections.

But it's not even close to the number of people or amount of money in sports gambling online.

It's illegal in most of the US, but it continues to thrive. In fact, gamblers find it easy to wager money here in the US.

"They have access to the Internet," says New York Times reporter Walt Bogdanich. "The Internet is a wonderful thing. It can produce legitimate riches and illegitimate riches. And in this case, there are these gambling rings that law enforcement has just not been able to shutdown, in part, because they are located offshore. That's where their computer brains are."

Bogdanich dives into this murky world in a new film from Frontline called, "The Fantasy Sports Gamble." As part of their wide-ranging investigation, which includes fantasy sports, they uncovered an interesting overseas angle.

Bogdanich and fellow reporters traced the servers to places like Curaçao. The tiny Dutch Caribbean island is home to many gambling websites.

"They have a very tolerant government," he says. "And they are home to a lot of Internet gambling operations. They claim they regulate, but they really don't. And when we went to Curaçao we couldn't find any public officials there who would be willing to talk with us about what's going on. What do they do to ensure that these servers, these offshore sites are not operating illegally."

As a result, a ton of money moves through the island.

One gambling site takes in about $13 billion annually. "It didn't all flow through Curaçao, but that's where the brains of the operations resided," he says.

Sports gambling can both enhance and ruin a sport. It can make you care about a worthless mid-season game. But it can also undermine the game's integrity by fixing the outcome. Tennis is in the midst of unfolding scandal over match-fixing. And with such massive sums of money being bet offshore, it made us wonder if high rollers were corrupting professional sports leagues in the US.

"Look, there's always rumors about that," says Bogdanich. "But so far, no hard proof of serious match-fixing outside of a few isolated cases in recent years."