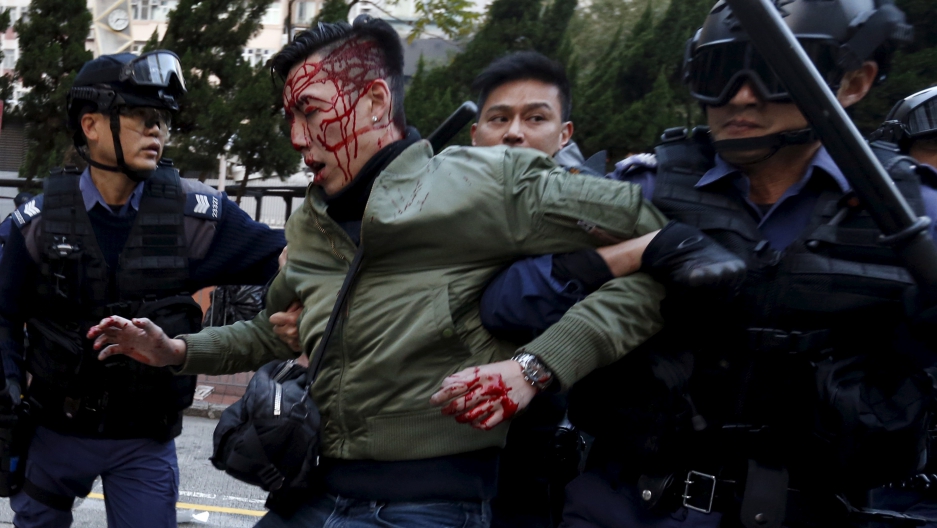 Hong Kong residents rioted overnight for a reason that might sound strange: They were defending unlicensed street vendors set up for the Lunar New Year celebrations.

When police, who have tended to ignore the illegal stands in the past, moved to crack down on the hawkers this year in the working-class Mong Kok district, demonstrators threw bricks and bottles and set fires. Riot police responded with tear gas and batons. The violence left around 90 people injured and dozens arrested.

But the demonstrations — dubbed the "fishball revolution" for a popular dish served by some of the vendors — were about so much more than food stalls.

Hong Kong is a quasi-autonomous city-state of China with some freedoms that aren't extended on the mainland — including freedom of speech. The riots come as Chinese police in recent months seem to have brazenly snatched a handful of Hong Kong publishers who had been critical of the Communist Party. As GlobalPost correspondent Patrick Winn reports, the disappearances are stoking fears that Hong Kong's delicately maintained autonomy is at risk. Many of the fishball rioters, like the masses of peaceful protesters who filled Hong Kong's streets during the "Umbrella Revolution" in 2014, are concerned about the very future of their city.

The stakes couldn't be much higher.

She may have had the best intentions, but Angela Merkel’s visit to Turkey couldn’t have come at a more awkward time.

As the German chancellor arrived in Ankara to discuss how Turkey could do more to stem the tide of Syrian refugees crossing the Aegean Sea to reach Europe, tens of thousands of civilians fleeing a dramatic increase in violence around Aleppo were banging at Turkey’s door, demanding to be let in.

That puts Merkel in a weird position, GlobalPost correspondent Richard Hall explains. Facing increasing pressure at home over her handling of the refugee crisis, she's now calling for Turkey to open its doors while at the same time doing everything she can to close Germany's.

Turkish politicians point out their country is already hosting 2.5 million Syrians and insist it's at full capacity.

As with many things in life, it could all come down to money: Europe hopes it can just pay Turkey to deal with it. The EU has pledged about $3 billion to help Turkey find the capacity to take in more Syrians and the resources to keep them from trying to reach Europe.

Meanwhile, refugees keep drowning off the coast of Lesbos, Greece.

Okay, so it's a little more complicated than that.

On Monday, India's telecommunications regulatory agency banned Facebook's "Free Basics," a program the company has introduced in more than 30 countries that it says offers free access to a few essential sites to people who would otherwise not have the internet.

But that's not how proponents of net neutrality see it.